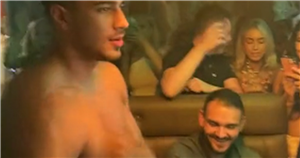 Revellers were left stunned as Tommy Fury partied the night away with them during a student night in Liverpool on Wednesday evening.

The former Love Island star appeared to be in great spirits during a raucous night out as he stripped shirtless in his private booth while a crowd of party-goers surrounded him in awe.

The 22 year old reality sensation was certainly loving the attention during his lads' night out as he beat his chest while the crowds around him cheered and screamed in delight.

Dramatically opening his arms out, the professional boxer motioned everyone to show him some more love and join him.

However, a bouncer watched over the crowds to ensure they didn't come closer to Tommy and his pals' private booth.

Tommy was seen without his girlfriend Molly-Mae Hague, with who he recently enjoyed an idyllic camping trip to the Lake District.

The blonde, who was recently announced as the new creative director of PrettyLittleThing, shared a collection of snaps with her 6million followers of the 'wholesome wild camping' trip with Tommy, sister Zoe Hague and her boyfriend, Danny Rae.

The pair were only reunited a few days before their camping trip as Tommy returned from the US following his almighty boxing win in his Stateside debut.

The couple had to spend days apart throughout Tommy's stay, as Molly was not able to join him overseas.

Despite the distance between them, Tommy made sure to pay tribute to his girlfriend at his match, wearing an elephant charm on his robe as he headed out to his match.

After winning against MMA fighter Anthony Taylor in a four-round battle, Tommy paid tribute to Molly once again, along with his father, who also couldn't be there in person to see him triumph.

"Dad, Molly, I wish you could be here tonight, but that was for you," he said. "We're learning, we're building, we're gonna keep winning, and hopefully you can be here next time. I love you both."