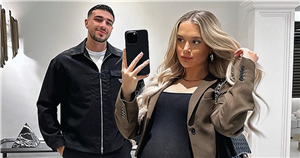 Tommy Fury has dropped a hint that his girlfriend Molly-Mae Hague may have given birth to their baby girl already.

The 23 year old, whose other half was recently spotted wrapping up warm ahead of welcoming her first child, took to his Instagram stories to share a sweet snap of Molly-Mae.

The Love Island star, also 23, can be seen dressed in a black turtleneck top with her blonde mane styled back into a bun in the photo.

Sipping on a Costa coffee can, the PLT creative director can be seen sitting in what appears to be a train.

"Exciting times with my girls," Tommy wrote over the image with a white heart emoji – leading many to believe that Molly-Mae may have given birth already.

According to The Mirror, one person took to Twitter to question: "OMG! Has Tommy just confirmed that Molly-Mae has given birth?"

"Looks like they have had her! His caption kind of gives it away," another shared.

But others were quick to shut down this rumour as they pointed out how often the couple tend to reference their unborn child on Instagram.

One person argued: "She hasn't given birth. CALM DOWN. Tommy has always spoken like that, since they dropped their pregnancy announcement".

While another said: "As if they would be bringing her home on THE TRAIN!!! Get a grip people".

Molly-Mae has been documenting her pregnancy journey since announcing the happy news back in September 2022.

Most recently, the pregnant star revealed her due date on her YouTube channel, explaining that she's set to give birth in just two weeks.

In a vlog posted to the social media channel, Molly-Mae showed off her baby bump, in what she said could be the final update before her daughter's arrival.

Showing her bump to the camera, the fashion mogul said: "Here I am. Here is baby girl, full term. I am now nine months pregnant."

Molly-Mae, who recently shared a peak into her indulgent beauty routine in the evenings, confessed she thought she'd actually be bigger, although other people disagree.

She revealed that while out and about during the day she bumped into some of the builders who worked on the home renovations, who said: "Bloomin heck have you not had that baby yet? It looks like you're carrying twins."

Quick to nip any rumours in the bud, Molly-Mae quickly clarified that she is not expecting twins.

Opening up about the journey she's gone on with her bump, she said: "All bumps, all different shaped and sized bumps are amazing."

Molly-Mae added that at the start of her pregnancy she wasn't particularly confident in her bump, but this has changed.

Later in the video Molly-Mae said that she was looking in the mirror and became shocked by how big she is, adding that this is a good a thing as she's "literally two weeks away from giving birth."