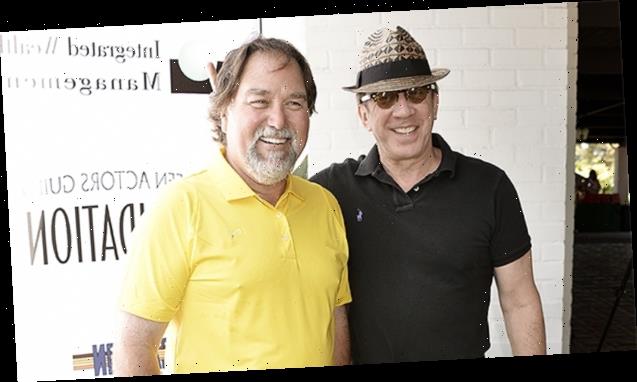 Here’s something that improved many fans’ days: a reunion between Home Improvement stars Tim Allen, 67, and Richard Karn, 64. The ’90s sitcom stars got together to film their new History Channel show, Assembly Required, and they made sure to snap a photo together on the set. Richard shared the picture on his Twitter page on Sept. 30 and wrote, “First day of shooting… this show is going to be amazing!!”

The show Richard promised would be “amazing” is a competition series that will feature the “best and brightest builders from across the country, at their home workshops, as they compete to breathe new life into everyday household items in desperate need of fixing,” our sister website Variety reported on Aug. 25. As for Tim and Richard’s roles on the show, they’ll be serving as hosts and executive producers, and will “also dive into the unique history around these items to celebrate the men and women who crafted them,” Variety added.

Tim also took to Twitter with his own behind-the-scenes photos. In one photo, the comedian gave a look at one of the on-set builder stations and wrote, “Richard Karn and I begin our new History Channel gig ‘Assembly Required’ to celebrate and challenge all the folks who engage, fix and create.” Another photo was a selfie with Richard, and Tim teased, “This show is actually a blast…..so farrrrr.”

Tim and Richard’s reunion was nostalgic for many fans who loved watching the duo on the small screen in the pre-millennium. “It is so great seeing you guys back together,” one fan tweeted, and another fan wrote, “It’s really good to see you two back together again. One of the best TV duo’s of all time.” A third fan was just as excited but wished that Home Improvement would receive a reboot, writing, “Cant wait but still wish we would get a Home Improvement reboot, or even just a holiday special ‘A Very Brady Christmas’ style.

After news of Assembly Required broke, Tim revealed why he was partnering with Richard once again. “Let’s face it, we’re living in a throwaway society. We buy, break, replace… rinse and repeat. Whatever happened to repair and rebuild?!  There are some people who unfriend, unfollow and dispose of anything that offends, annoys or breaks – so I’ve created a show to remind people of the satisfaction and pride that comes from rebuilding something on their own.  And who better to join me than my buddy from the old Tool Time days – Richard Karn! Now we’re talking More Power!,” Tim wrote in a statement to Variety.

Ironically, Tim and Richard also played co-hosts on their fictional show Tool Time on their real-life sitcom Home Improvement. The sitcom aired between 1990-1999, and was a hit with TV viewers.