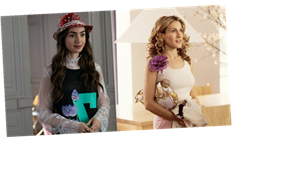 Netflix latest series Emily in Paris is garnering a lot of comparisons to Sex and the City, and it totally makes sense. Both shows feature a young woman finding herself in a big, stylish city while navigating romance, friendship, and work. But the connection between the two series goes even deeper; Sex and the City and Emily in Paris share a creator and a costume designer, leading to a lot of references to the former in the latter. In fact, there are plenty of Sex and the City Easter eggs in Emily in Paris — and yep, they all center around the fashion.

Warning: Spoilers for Season 1 of Emily in Paris follow. Emily in Paris stars Lily Collins as Emily, a young marketing executive from Chicago who moves to Paris to pursue her dream job and explore the city. Emily is definitely not a copy of Sex and the City’s Carrie Bradshaw (Sarah Jessica Parker), but Collins pointed out that Emily probably grew up loving the Sex and the City ladies just like real-life fans.

"I think Emily grew up watching Sex and the City," Collins told Variety while promoting her new show. "I think she loved Carrie Bradshaw. I think that probably Carrie was one of those inspirations to her, as were all the other women in that show." 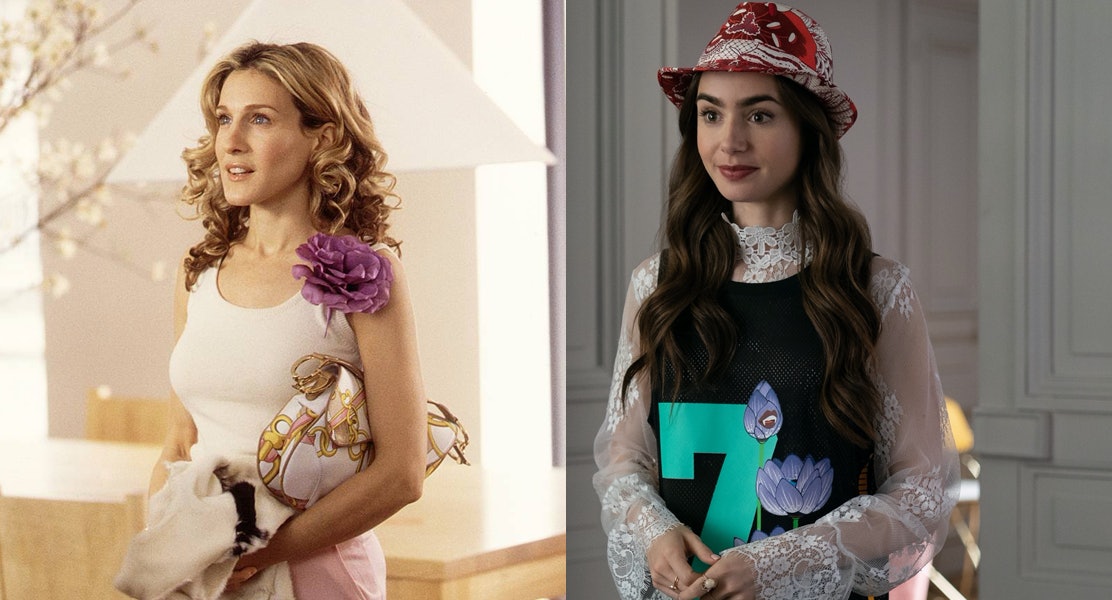 Not only do Emily in Paris and Sex and the City share a creator in Darren Star, but they also share a costume designer in Patricia Field. Her iconic fashion direction can be seen in both series, and it turns out, Field even included some Sex and the City easter eggs in the outfits worn throughout Emily in Paris. These tiny deets are definitely going to make you want to rewatch both shows all over again: When Emily attends her first major work event, she goes full-Carrie with a puffy tulle skirt. According to a press packet obtained by Elite Daily, Field said the look is a direct homage to the green tulle skirt Carrie wears in Paris in the Sex and the City series finale. Since Sex and the City ends in Paris and this scene shows Emily at the beginning of her journey in Paris, this look creates a sweet connection between the two.

Neither Carrie’s nor Emily’s time in Paris goes perfectly, especially when both characters literally step in dog poop while wearing designer shoes. Carrie wears stilettos while Emily wears white booties, but both women have their fashion-forward moment ruined by a little furry friend. 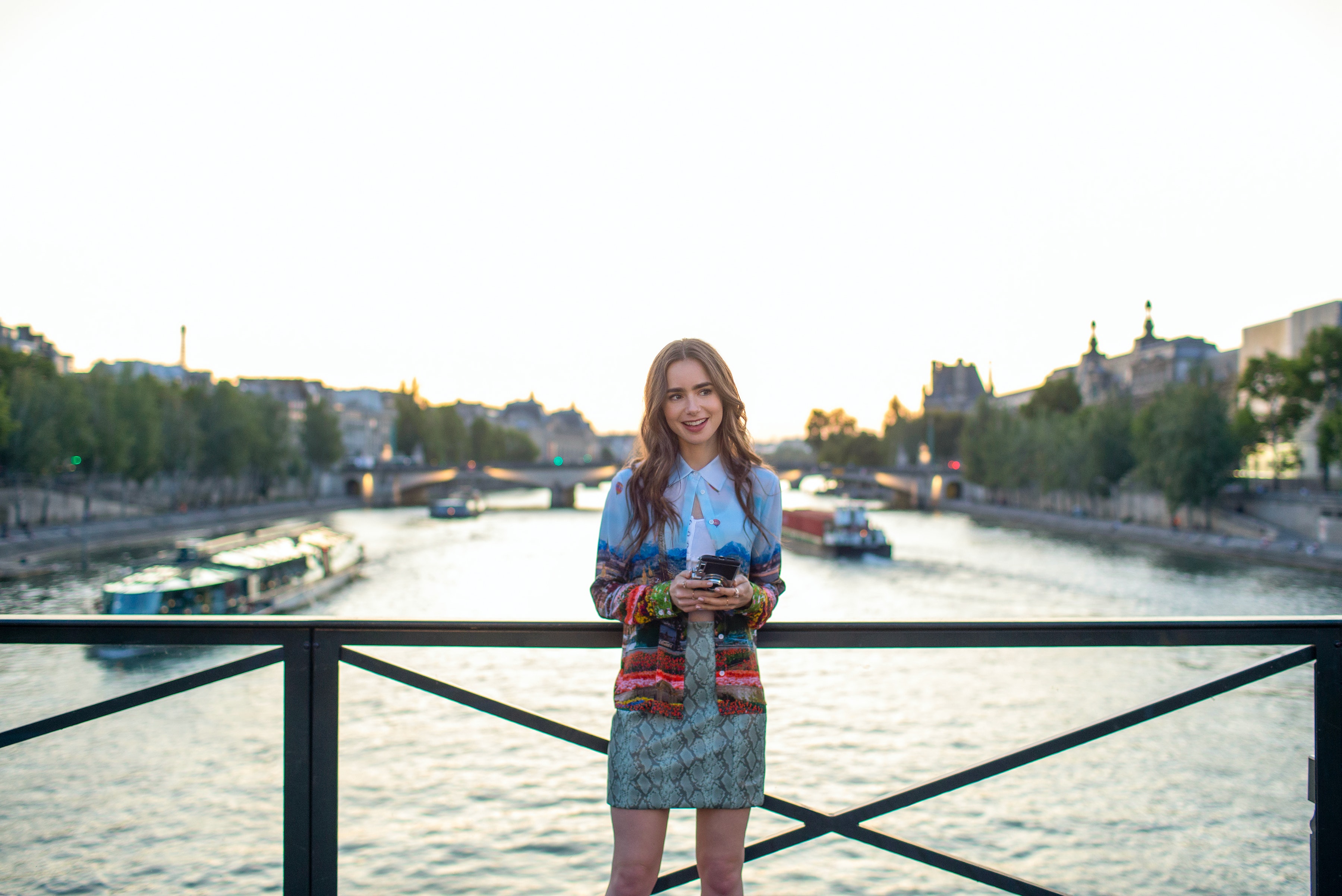 Carrie was always known for making a bold statement with her clothes, like the time she wore a dress covered in newspaper print. Emily is just as splashy on her first day at her new French company Savoir. She wears an Alice + Olivia Eiffel Tower print top along with Christian Louboutin shoes (another favorite of Carrie’s) that say "Paris" on them. Emily makes it clear she’s not afraid to show her personality through her clothes, just like Carrie.

Throughout much of Sex and the City, Carrie wears a necklace with her name on it, so, according to Netflix, Field wanted to give Emily her own signature jewelry too. In Emily in Paris, Emily wears earrings that say "Emily" on them as a little nod to Carrie’s necklace. 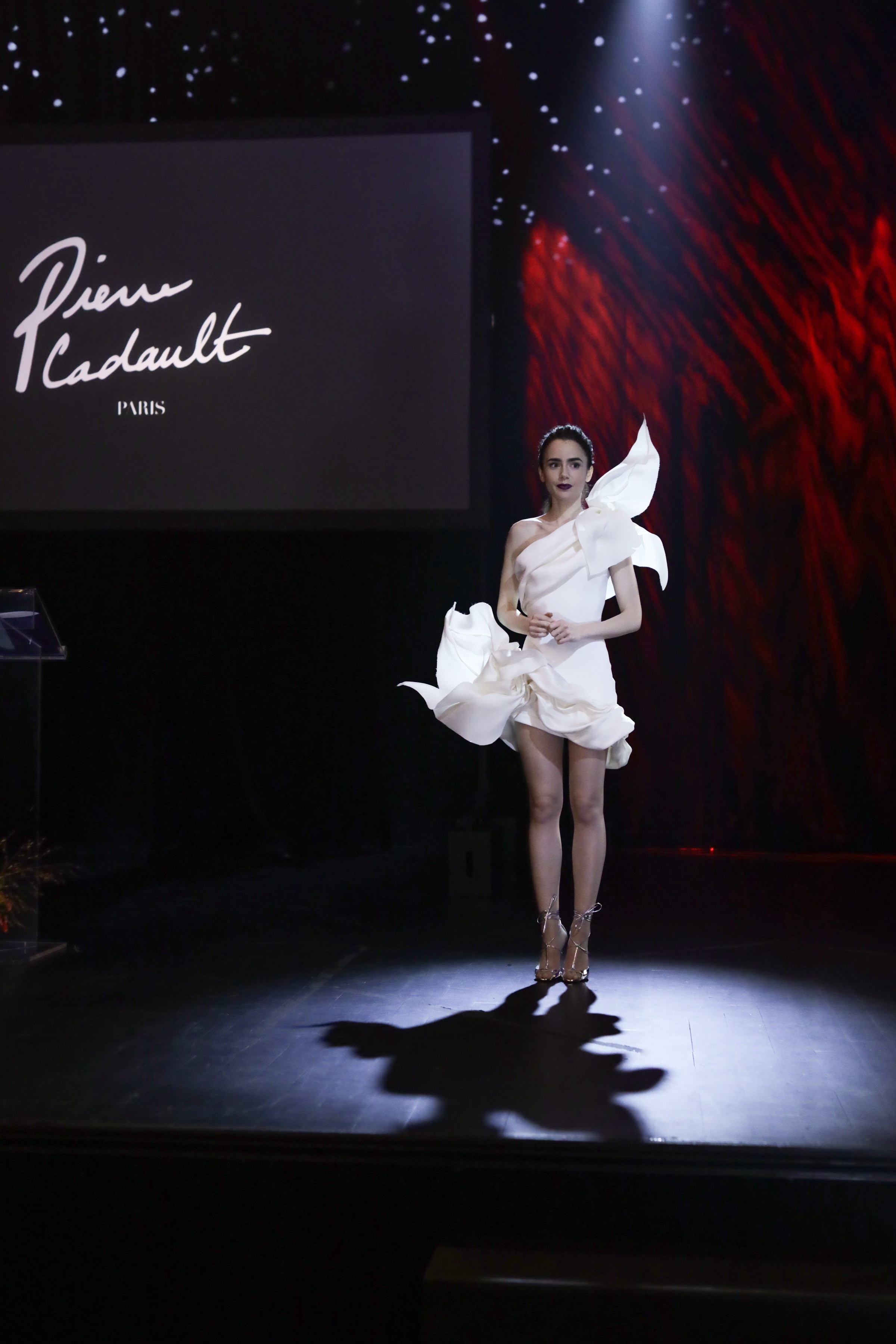 Fashion makes its way into the storylines of Emily in Paris, just like it did in Sex and the City. Toward the end of Season 1, Emily ends up facing a disaster while modeling a dress for a fictional client (IRL, it was made by Stephane Rolland Haute Couture). The scene is reminiscent of Carrie’s famous fashion show moment on Sex and the City, when she faceplants on the runway while wearing Dolce & Gabbana. Emily’s dress also features some big floral accents, which are a signature Carrie style choice.

You can track down all the Sex and the City Easter eggs in Season 1 of Emily in Paris, on Netflix now.