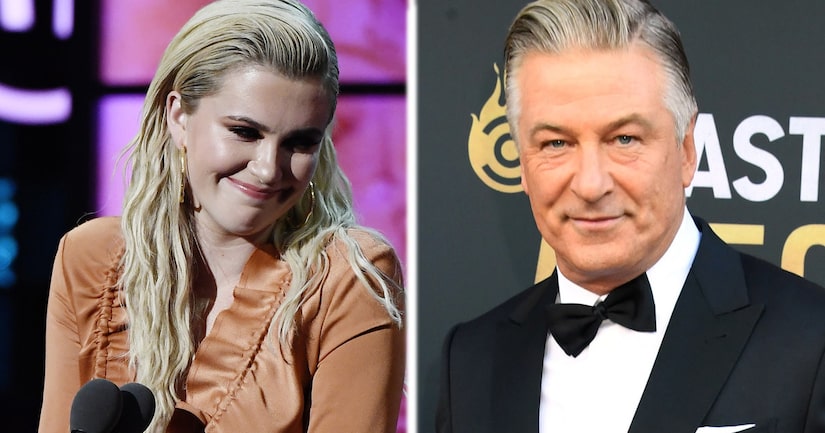 “I”m here to talk to you, Dad, finally, without a court-appointed social worker,’ Ireland Baldwin began.

Ireland Baldwin took her father Alec to task more brutally than expected during his Comedy Central Roast on Sunday.

Before the broadcast, the network released a short video clip of the model hurling insults at the famous actor including a hilarious reference to the infamous voicemail where he called her a "rude, thoughtless little pig".

But the televised event proved Ireland had more stinging barbs in store as she declared: "A lot of people only know my dad as an angry guy, but he’s more than some lunatic who loses his temper. He also loses Emmys. And Oscars. And custody of his firstborn child."

She began her monologue by introducing herself to Alec, adding, "I actually have a lot in common with the people on this roast, because like them, I don’t really know you that well, either."

"I"m here to talk to you, Dad, finally, without a court-appointed social worker. It’s so nice that we can do that," she continued.

The young beauty then took aim at Alec getting kicked off of a flight in 2011 for being "extremely rude to the crew". "I’ve been modeling, which is a really fun gig. Honestly, it’s just nice for a Baldwin to be on a runway without starting beef with American Airlines. I was so surprised when I heard about that plane incident. I mean, why would you even start shit with the one place that’s still showing your movies."

And alluding to the voicemail from 2007, she remarked "He was a great dad. I still remember when he would tuck me in and yell me a bedtime story. My absolute favorite, and his favorite, ‘The Three Little Thoughtless Pigs.’"

Ireland even brought her mother, Kim Basinger, into the mix as she said: "It hasn’t been easy being the daughter of an iconic movie star, but I’m not here to talk about my mother. Or her Oscar." Kim won Best Supporting Actress in 1998 for her role in L.A. Confidential.

After a few more slights about Alec’s parental neglect, Ireland ended with, "After all the years of giving verbal abuse, it’s finally time you received some. So before I leave, I’d just like to say something you’ve never said to me: good night."

But Ireland wasn’t the only celebrity to brutally mock the "30 Rock" star.

Here are the top 10 most savage jokes from the roast:

"Alec had a substance abuse problem in the past but he worked through it and hasn’t done anything of substance in 20 years." – Sean Hayes

"When I was Bruce we were like brothers. I guess that’s one more brother he’ll never talk to again." – Caitlyn Jenner

"I first saw you in the movie "Pearl Harbor", which was worse than the actual Pearl Harbor. Halfway through I was rooting for the Japanese." – Jeff Ross

"What was it like doing an impression of Trump? All that anger? All that shameless narcissism? How did you dial it down to play Trump?" – Triumph the Insult Comic Dog

"He doesn’t care who he hits. I once saw him take a selfie and punch his own face." – Robert De Niro

"No offense, but you weren’t the star of ’30 Rock’. And with De Niro here, you’re not even the star of your own f–king roast." – Ken Jeong

"Thank you for having me… is something your kids will never say." – Sean Hayes