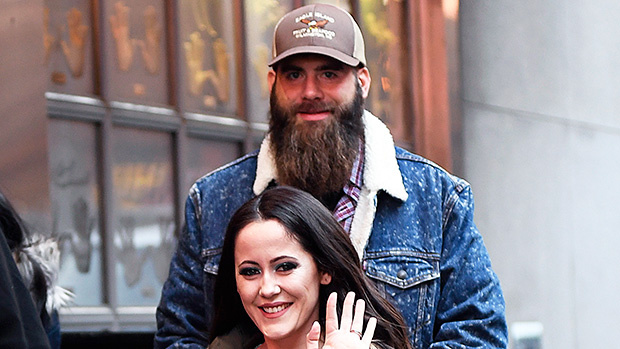 Jenelle Evans, 27, and her husband David Eason, 31, are in the Big Apple! The couple touched down for New York Fashion Week, and were spotted front row at the InstaSleep Mint Melts Presents New York Fashion Week Nolcha Show on Saturday, September 7, where popular online brand Elf Sacks unveiled their latest line. Jenelle and David, who live in Wilmington, North Carolina, appeared to be enjoying a fun date night without their kids: 2-year-old Ensley — who they share together — along Jenelle’s sons Kaiser, 5 and Jace, 10 and David’s daughter Maryssa, 11.

For her big night out, the Teen Mom star rocked a skintight plaid-print mini dress with stripes down the side, accentuating her curves. Keeping in the ’90s theme, she wore a vintage-looking denim jacket over her shoulders and strappy black high-heeled sandals. The 27-year-old finished her look with a slick, high ponytail, a bright red lipstick. David was also dressed for the occasion, with a red pant — matching his wife’s lip color — a beige-toned button down and black leather shoes.

Jenelle proudly posted a photos of the two out-and-about on Sunday, September 8, captioning the images “Happy & healthy 💓 #MarriedLife #NYFW.” The couple posed at the event venue, with the photo call backdrop visible in the background. In the first snap, Jenelle lovingly places her hand on David’s chest as he puts his arm around her, and in the next, they are both seen smiling. Jenelle documented the experience on her Instagram stories, and the couple continued their evening festivities with cocktails at popular spot Sugar Factory. Fellow Teen Mom star Farrah Abraham was also spotted making an appearance at the event.

The reality star has expressed an interest in getting involved with the fashion industry, and recently announced she’s launching her very own cosmetics line. “I have a big support team that helps me out [with the line],” she told TMZ‘s cameras outside of the event. “We’re really excited for the launch and we can’t wait.”

The appearance comes after a wildly dramatic two months, which led to Jenelle and David temporarily losing their kids after David shot their family dog Nugget on May 1. They were able to regain custody in July after weeks of court dates, and but appeared to be in good spirits outside the event. “We’re happy and healthy in our married relationship…everything is back to normal,” Jenelle said. She also shut down rumors about another baby or possible pregnancy, admitting she’s had her “tubes tied and all that.”