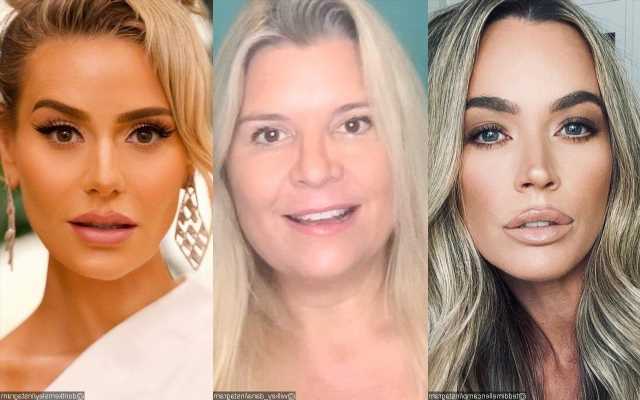 The ‘RHOBH’ star accuses Dana, who has appeared as a friend on the Bravo reality TV show, of putting the fashion designer and her family ‘in danger’ with her post.

AceShowbiz –Teddi Mellencamp seemingly believed that Dana Wilkey was the one to be blamed over the robbery at Dorit Kemsley‘s house. On Thursday, October 28, Teddi accused Dana, who has appeared as a friend on “The Real Housewives of Beverly Hills“, of putting Dorit and her family “in danger” with her post.

“I hope you sleep really well tonight,” Teddi commented on a picture of a deposition which Dana had posted on Instagram before the incident. “You put her and her kids in danger by posting this. Disgusting.”

The said deposition showed Dorit’s LLC, which is named after her residential street. The document, however, didn’t reveal the fashion designer’s exact home address. While it’s unknown why Dana posted the doc, she did raise people’s eyebrows with her caption which read, “Guess why I’m posting this?” The post has since been deleted.

Dorit’s husband Paul “PK” Kemsley also explained that deposition is a “normal statutory document” before accusing Dana of wanting to stir things. “The first [reason] is because she’s thirsty and wants more followers (don’t follow her) and thinks this will help, the 2nd answer is because she’s trying to imply to her less informed followers that this public document in some way suggests we the Kemsley’s [sic] have done something wrong and are crooks/con people,” PK wrote on Instagram.

“This is a statutory document that’s required by law and simply provides basic information about an LLC…,” so he noted. “Because you have attempted to hurt my family’s reputation in a sad attempt to garner more attention I’m delighted to award you C..T of the week.”

Dorit was held at gunpoint during a home invasion on Wednesday night. The reality TV star was allegedly at her Encino Hills, California home with her two children, Phoenix and Jagger, when the incident occured.

Two of the three male suspects allegedly walked into Dorit’s bedroom while she was sleeping, prompting her to wake up. “Don’t hurt my babies. Don’t kill me, I’m a mother,” she reportedly begged the intruders. One of the men apparently responded, “Kill her.”

According to reports, the robbers ransacked the house for 20 minutes before making off with all of her jewelery, handbags and $100,000 worth of her valuables. Thankfully, Dorit and her children were not harmed.