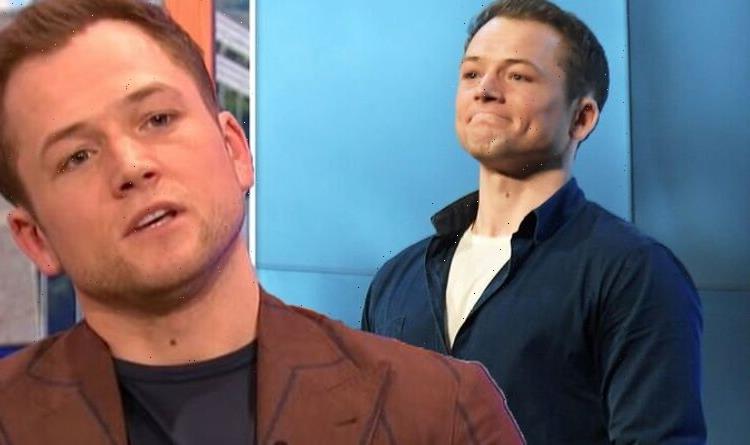 Taron Egerton has quit the West End show Cock which he was starring in alongside Bridgerton actor Jonathan Bailey. The actor’s exit from the play was announced in a statement made by the show’s official Twitter account, which said the star, 32, had left the show for “personal reasons”. The Rocketman actor had previously fainted on stage during the opening night of the play and was replaced by his understudy after contracting Covid.

In view of their 1,400 followers, the show made the announcement confirming Taron’s exit.

It read: “Joel Harper-Jackson will take over the role of M in Mike Bartlett’s razor sharp, hilarious play Cock until the end of the run.

“The part was originally played in this production by Taron Egerton, who has had to withdraw from the production due to personal reasons.

“Joel understudied the role and has been playing the part of M for the past ten days while Taron was absent from the production having tested positive for Covid,” it added.

The show’s director Marianne Elliott branded Joel an “absolute hero” and a “gifted actor”, adding that audiences have been “cheering” for him.

Meanwhile, the show’s star, Bridgerton actor Jonathan, called him an “immense talent”, saying that he is “proud” to appear on stage with him.

The play follows John (Jonathan) who falls in love with a woman (Jade Anouka) after going on a break from his long-term boyfriend (Taron).

The announcement comes after Taron fainted on stage during the first run of the play.

Following the concerning incident, a statement read: “During this evening’s first preview of Mike Bartlett’s play ‘Cock’ at the Ambassadors Theatre, Taron Egerton fainted towards the end of the performance.

“A doctor who was in the audience attended to Taron immediately after the incident, and whilst he felt fine, it was decided that Taron’s understudy, Joel Harper-Jackson would continue in the role to complete the performance.”

Addressing the incident, the star took to Instagram to break his silence following the events on opening night.

He told his 2.5 million followers: “As some of you may have heard, I passed out during the first performance of COCK last night.

“I am completely fine. Slightly sore neck and a bruised ego, but I’m fine.

“I’ve decided to put a positive spin on it and I would appreciate it if anyone who was in the theatre last night just said that I gave such a committed, electrifying performance that my body couldn’t handle it and check out.

“That being said, apparently you’re meant to actually do the full show and not just three quarters of it” he added.

The Rocketman star went on to promise that he will be returning to the stage imminently.

Taron continued: “I’ll be back with a vengeance tomorrow night.

“Thank you to the amazing team at the theatre and my wonderful cast mates for being so lovely.

“But mainly I wanted to say thanks to Joel Harper Jackson who stepped in to do the last bit of the play.

“Joel is an amazing actor and a lovely person. Thank you, Joel. T x,” he ended his post.

Cock is running at the Ambassadors Theatre until June 4 and tickets can be purchased here.