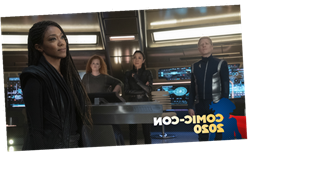 Trekkies have been patiently waiting for over a year to devour season 3 of CBS All Access’ Star Trek: Discovery. While there hasn’t been an official premiere date (yet), Thursday’s [email protected] panel revealed the plan is still to return some time this year.

The stars of Discovery, along with co-showrunner Michelle Paradise, virtually reunited to discuss the season 2 finale and what awaits the USS Discovery crew after they blasted off a thousand years into the future to parts unknown.

Series star Sonequa Martin-Green intimated that the time jump, which forges a new path for Discovery in season 3, is a “salvation, of sorts” for main heroine Michael Burnham. By traveling into the distant future, Martin-Green said Burnham and the crew “are deciding to sacrifice everything that we have for the the future.”

“There’s the obvious hope that that works, that the plan works. And even logistically, that we land where we’re supposed to, that we defeat Control, that we save the world and save the universe. There’s inherent hope in that,” Martin-Green previewed. “And also, the hope to continue discovering myself as Burnham. That’ll always be there. That hope of continual unveiling and finding that perfect, sweet balance between all the forces that wage within me.”

But not everyone on Discovery is looking at the future through a positive lens. Exhibit A: Philippa Georgiou.

“I think she’s really pissed off. It’s like, ‘Michael Burnham, don’t get in my way!'” laughed Michelle Yeoh, who has her own Section 31 spinoff in development at CBS All Access. “She is one who always finds her way into adapting because she is a survivor with many skills, and a formidable ally or an enemy.”

“She goes in there very pissed off but I’m sure very quickly, she’ll find a way around,” she hinted. “Power is something inherently that she has. She doesn’t even seek it, she just has it. Scary, huh?”

Added Mary Wiseman, who plays Ensign Sylvia Tilly: “We’re all on the edge of the unknown. So all of our ideas of what the future holds and who we are and who we want to be are transformed.”

Watch the Star Trek Universe panel at [email protected] below.

Star Trek: Discovery returns this year on CBS All Access.