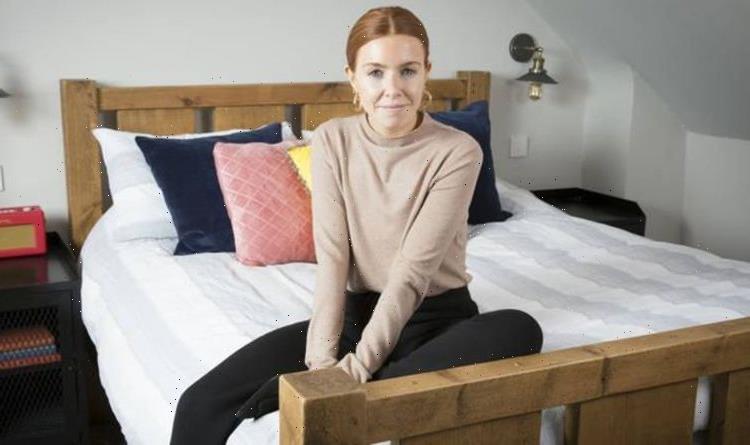 As if that weren’t enough, the former Strictly Come Dancing winner is hosting a new podcast and also recently appeared on The Great British Celebrity Bake Off. How does she juggle it all? “It’s funny, isn’t it, how you end up doing things you never thought you could do,” she says. “So I wouldn’t have imagined that I would be able to multi-task, but I’m hanging on in there.” It is extraordinary to think that someone who can’t walk – not waltz, she hasn’t “looked at a dance floor since 2018” – into a supermarket without being mobbed was never destined for this life of fame and ubiquity.

In fact, Stacey, 34, was plucked from obscurity – and a perfume counter at Luton Airport where she was working after leaving school at 16 (she grew up nearby) – to be a contributor on Blood, Sweat and T-shirts, a 2008 BBC Three documentary about the clothing industry in India.

The series followed six fast-fashion ­consumers in their early twenties as they lived alongside the Indian garment workers who make clothes for sale in Britain’s budget high street chains.

Stacey was such a natural in front of the camera that she was asked to be a co- ­presenter and the series was nominated for a Bafta in 2009. BBC bosses were so impressed that she was immediately offered her own BBC Three series, Stacey Dooley Investigates. And the rest is TV history. 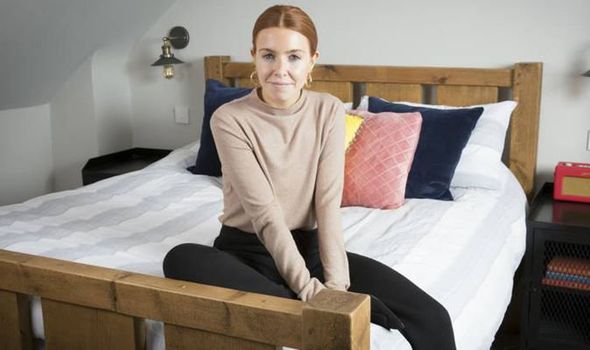 Many people would have let all this success go to their heads, but talking to the Express, Stacey, wearing large statement earrings and a ­glamorous, shimmery top, is in a buoyant mood but remains touchingly grateful for the unexpected opportunities that have come her way.

“I never take it for granted,” she insists. “Even if I’m knackered or I’ve got the hump or I feel like I’ve been working non-stop, I feel really lucky to be able to do this for a living. What a gig.

“I’ve had the most extraordinary life. I can’t quite believe it. It’s been well ­documented, but it was never really meant to play out like this.”

Strictly – and the subsequent romance with her professional dancing partner Kevin Clifton, with whom she now lives – brought about a seismic shift in Stacey’s profile.

“It definitely changed the demographic,” she says. “I think up until Strictly, I had a real presence on BBC Three, but I don’t think I was a household name by any stretch of
the imagination.

“I was known for documentaries, but then Strictly catapults you into a different space. Suddenly, Mary in Tesco knows who you are. So it’s definitely changed my life for the better.” 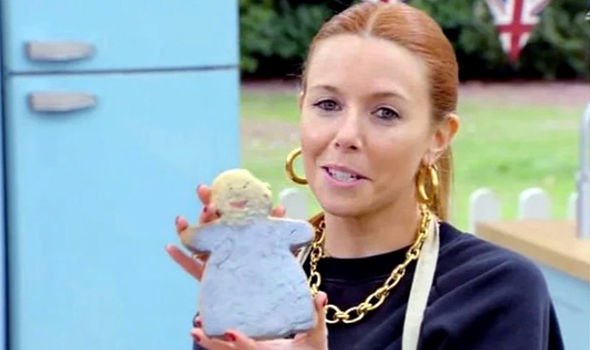 Her career has not been entirely without controversy. Two years ago Stacey made a film for Comic Relief in Uganda and after posting a picture of herself with a young boy there, she was criticised by some for being a “white saviour” – someone who travels to poorer, black nations ­without truly understanding the history and causes of the poverty or what needs to be done.

But Stacey is quick to defend herself: “Ultimately, the only people I care about are the people on the ground. I was texting them yesterday. They’re very happy with how we behaved. We had consent from the family to use the picture. On my part, I feel OK with what we did.”

Central to her appeal is a pleasing line in self-deprecation. After watching this second series of Stacey Dooley Sleeps Over, in which she spends the weekend with such unusual people as Britain’s answer to Tiger King, the family of a child model and a clan of eco warriors, she says that visitors to her own home might be slightly disappointed.

“What I take from the families I stayed with is how incredibly dull I am! They have really brilliant conversations and they stand for something. After being immersed in their lives for 72 hours, they make you realise how un-rock ’n’ roll you are. I come home and live a very mundane life. The telly is on, I have a cup of tea, Kev’s asleep on the sofa and the washing hasn’t been done. Nothing to write home about, I’m afraid.” 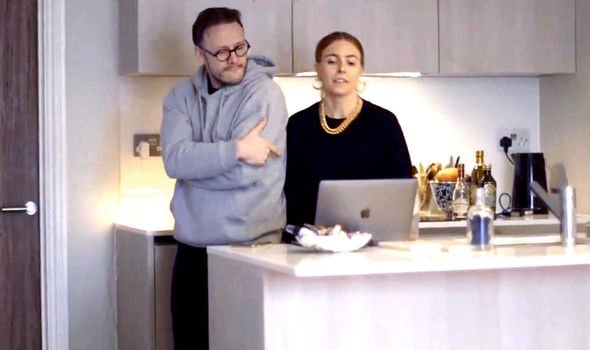 Despite mastering the unusual trick of switching between jolly game shows such as This Is My House, and serious documentaries (Back On The Psych Ward), both for BBC2, Stacey cheerfully refers to herself as “an idiot” and chuckles about being the butt of jokes at work.

“In this series, Reece [The British Lion King] had a load of monkeys. I went into their cage with lots of food, and it was like a scene out of Jurassic Park.

“The monkeys were all over me. I was screaming, and at the same time trying not to scream because I didn’t want to scare them. All I could see was my producer standing outside the cage crying with laughter. I immediately thought, ‘that’s the trailer!’ And of course, it is!”

The antithesis of an out-of-touch Oxbridge-educated presenter, Stacey oozes empathy and her girl-next-door quality shines through on the show.

“I’m often filming in hostile environments, but this feels like a familiar landscape. We’ve all been to Nottingham or Glasgow or Essex. Instantly, it feels like, ‘that could be me or my neighbours’. 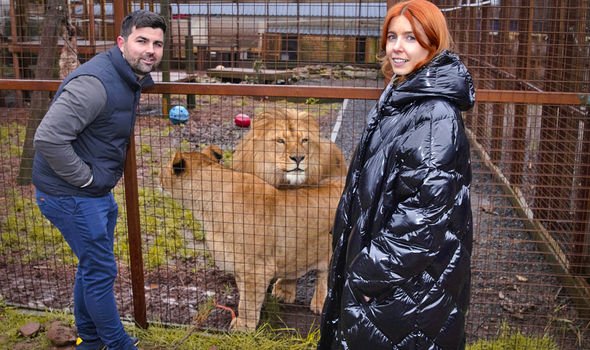 “I go in with an open mind. You don’t have to be shouting and kicking off and rude. As long as you’re willing to have a rational conversation, people don’t mind being pushed about their opinions.”

In the current divisive climate, Stacey believes this tolerant approach is “really, really healthy, especially as we are now so polarised and so tribal. We only go around with people who vote the same as us and speak the same as us. Are you Left or Right? Are you a Brexiteer or a Remainer? It’s really important to listen to opposing views because it makes you think.”

These divisions are fuelled by social media “which is one of the reasons I came off Twitter,” says Stacey. “I recognise now that it really isn’t the place for nuanced debate. It’s not where you can have a rational, reasonable conversation.”

If the presenter were offered a third series of Stacey Dooley Sleeps Over, how about living with a family of ballroom dancers?

“It’s definitely a unique community. I love that world and I love dancing. But I already live with a ballroom dancer, so I would learn nothing.” 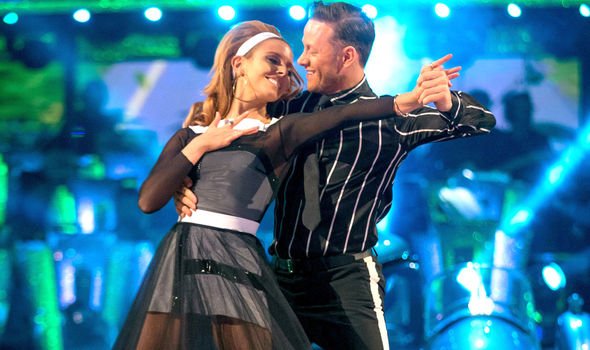 Not that Strictly wasn’t a huge challenge at the time. Talking about one of the dances that helped her and Kevin grab the show’s Glitterball trophy, she said: “If you could have seen the state of that dance on the Thursday of that week! We were seriously thinking, ‘Either we are going to have to change the routine or I’m going to have to pull a sickie’. But we got there in the end.”

Speaking of struggling with the challenges of the job, does she actually spend the night in these people’s houses or just sneak off to the nearest five-star hotel when filming ends?

“People always ask me, ‘Do you really sleep over?’ And I say, ‘Yes! I have to creep out of bed at 3am when I need to wee and quietly go across the corridor to the toilet’.”