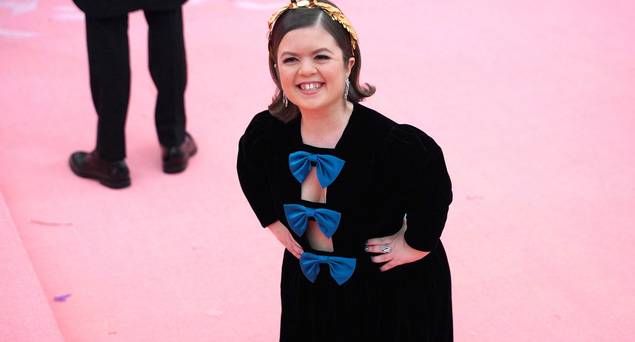 Britain’s Duchess of Sussex handpicked Sinéad Burke to partake in a line-up of women blazing a trail across the globe.

There are those who are quibbling the exclusion of the Queen among Meghan Markle’s list of women representing ‘forces of change’.

There are those also querying its originality, considering Markle herself was featured in a rather similar ensemble of trailblazing women back in 2016 — a book compiled by Australian writers Samantha Brett and Steph Adams, entitled The Game Changers.

There are also those — yours truly included — who think the inclusion of the mirrored panel, reflecting readers’ image and therefore suggesting their respective ability to also be instrumental in change, is a bit on the heave-inducingly twee side.

Instead of focusing on everything wrong with Meghan’s guest-edited edition of British Vogue, we’re instead choosing to applaud the positive, mostly the presence of Irish activist, writer, TED-talker, podcaster and all-round fashionista Sinéad Burke.

Tweeting about her inclusion in the esteemed line-up, Burke said: “I’m so very proud, incredibly honoured and humbled to be one of the fifteen Forces for Change featured on the cover of @BritishVogue’s September issue, chosen by a very special guest editor, the Duchess of Sussex.”

How did a young Irish blogger get to this impressive point, sharing the world stage with 14 other global icons at the forefront of their respective fields?

Born in the heady days of 1990, Burke lives in Navan and has four younger siblings. She inherited achondroplasia and her theatrical verve from her Brummie dad, Chris. By way of example, Sinéad’s ability to command a stage led her to become the reigning Alternative Miss Ireland — the competition came to a close in 2012.

But who is Sinéad Burke and how did she get to this point? Behold a scant history of sorts: Sinéad knew she wanted to be a teacher after her first day in school. Having an innate understanding of the importance of being heard, particularly in infancy, Sinéad trained to become a primary school teacher at Marino Institute of Education, graduating top of her class.

She is busy adding strings to her expanding bow by working on a PhD in Trinity, focusing on human rights education and exploring the voice of the child in the classroom. Sinéad’s use of language can be as zippy as it is prolific, lending itself across an array of mediums. She cut her writing chops as blogger Minnie Melange over a decade ago. While entrenched in her studies, she started penning articles about the fashion industry, and — by extension — its spurious claims about inclusivity.

She’s been a contributing editor of British Vogue, appeared on the front cover of Business of Fashion (The Age of Influence edition), as well as featured in The Financial Times, The Telegraph, and The New York Times.

She has also interviewed a litany of ‘Extraordinary Women’ in a series which appears on her website (sinead-burke.com), including Saoirse Ronan, Sinead Gleeson, Paloma Faith and Stephanie Roche. Has she penned a book? Not yet, but it’s inevitable. In 1998 her parents founded the charity organisation LPI (Little People of Ireland), providing a much-needed voice reminding us of the ongoing stumbling blocks to a truly inclusive society. Trying to pay for services at a till, negotiating toilet locks, and the perils of being handed hot drinks are just a few of the issues experienced by little people in everyday life.

While writing for Vogue, Burke penned an article charting the abuse she has suffered because of her height.

Recently, a teenage boy leapfrogged her on O’Connell Street, while his friends recorded the footage. Through her activism, she works closely with the Gardai in an attempt to irradicate such hate crimes, all to the benefit of the many little people of Ireland.

Not only does Sinéad host a regular podcast (As Me with Sinéad, via Lemonadamedia.com), she has also been invited to talk at the World Economic Forum, Davos, where she waxed lyrical about the concept of ‘Designing for Everyone’ and had one-on-ones with the likes of Oprah and Joe Biden.

She also hosted her own TEDtalk on design inclusivity in 2017. From her fashion blog, to highlighting how being effectively forced to wear children’s clothes is wrong and infantilising, to then becoming the first little person to walk the red carpet at the 2019 MET Gala, fashion has been a driving force for Sinéad.

She is literally at the cutting edge of design in the industry (don’t believe me? Just seek out her Business of Fashion front cover for further clarification), ensuring that everyone — big and small — matters.

As for what this latest accolade means for Burke, personally?

Well, it’s “Bananas… I’ve been collecting the September issue of Vogue for as long as I can remember. They were my gateway to a world that I couldn’t visualise myself within.

“Those September issues still line my bookcases at home and now, I’ll get to add one more to that collection!”

The issue reaches newsstands this Friday