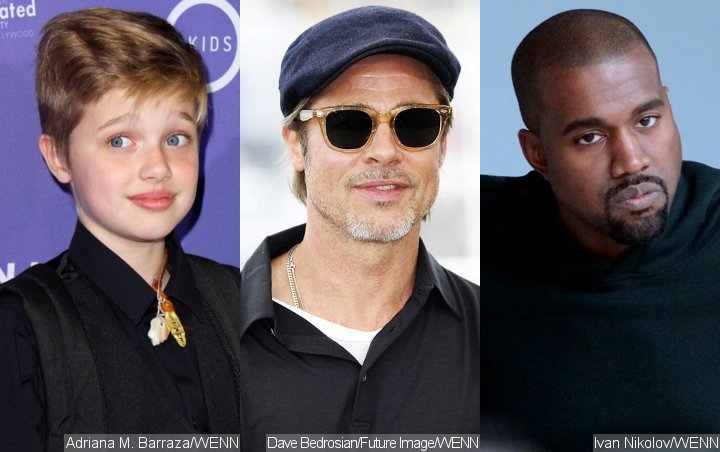 The 13-year-old daughter of Brad and Angelina Jolie reportedly wants to move in with her dad soon after he showed ‘out of character’ behavior by recently joining the rapper’s spiritual gatherings.

AceShowbiz -Fans were apparently not the only one surprised by Brad Pitt‘s recent appearance at Kanye West‘s Sunday service. His daughter Shiloh was reportedly taken aback by her father’s behavior, which is described as “out of character”, when he attended the rapper’s spiritual gatherings, which some have labeled a “celebrity cult.”

According to New Idea, the “World War Z” star is feeling increasingly sad about his estranged relationship with his children after Maddox’s move to South Korea, where he’s studying bio-engineering at Yonsei University. The 55-year-old actor allegedly tried to find solace at Kanye’s outdoor church service.

“Brad’s feeling really disillusioned about his relationship with some of his kids, and it’s really tearing him up inside,” a so-called insider tells the site. “He wants to get in touch with his spiritual side again and let go of all the tension that’s consumed him since the divorce and thinks Kanye can help.”

But Brad’s behavior only caused his daughter Shiloh to worry about him. The 13-year-old girl has reportedly reached out to her father and urged him to seek professional help rather than turn to Kanye’s Sunday service. Shiloh additionally plans to move in with her dad sooner than later so that she can keep a close eye on him, according to a source.

A source said earlier this year, “She just wants to stay with her dad.” Another source told HollywoodLife.com in May, “She’s crazy about her dad, so spending time with him is at the top of her wish list.”

Meanwhile, Angelina Jolie is said to be planning to adopt another kid after Maddox’s leave for college. A source tells Radar Online that the 44-year-old actress has had the plans for a while, and she “wants it to happen within the next few months.” The source reveals, “This has been in the works for a while, but she put it on hold until after Maddox officially left home.”

The “Maleficent: Mistress of Evil” star, however, has not made a decision regarding where her seventh kid will be adopted from. “Because of her ties to so many countries, Angie has several options to choose from that won’t involve too much red tape or background screening,” another source explains. “She’s doing this very methodically and still favors picking a child from an impoverished region she’s familiar with, like Syria or another part of the Middle East.”