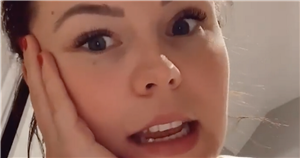 Shelby Tribble has confirmed that she will not be returning to The Only Way Is Essex and has admitted that she is “much happier place” now compared to when she was filming the show.

The former TOWIE star, 28, who gave birth to son Abel in November, revealed all in an Q&A on Instagram as she caught up with her 482,000 followers online.

Shelby found fame when she appeared on the show in its 22nd series in March 2018, in which she got together with ladies' man Pete Wicks.

The pair called it quits in September that year after a number of explosive rows between Pete, Shelly and his ex-girlfriend Megan McKenna.

Shelby has admitted that she is still in regular contact with co-stars Amber Turner, Chloe Meadows, Courtney Green and Liam Gatsby, but she has “decided to come away from it all” to focus on being a mum after she announced she was expecting her first child last year.

The 2015 Miss Great Britain winner left the ITVBe hit reality show after only one series to dedicate herself to her relationship with Sam Mucklow and bringing up their beautiful baby boy together.

This comes after Shelby shared a candid statement on why she tries to avoid social media.

The new mum reached out to her followers on her Instagram stories and opened up about her feelings as she admitted it makes her feel unhappy with her appearance.

The model said: “I barely spend time or post on my social media because every time I go on it, it makes me feel so s**t about myself and the way I look.

“To try and keep up with a certain standard is hard work. I already suffer with low confidence and self-esteem. It honestly makes me want to get a face and body full of surgery.”

Shelby admitted that social media has had a detrimental effect on her mental health and how she views herself, but the mum of one also hit out at trolls who have left hateful messages on her posts.

The protective mother was recently forced to defend her baby son Abel after a vile troll commented on his appearance and called him “ugly.”

She was left furious by the incident and named and shamed the culprit. Alongside a screenshot of the comment, the TV personality wrote: "I am SO angry please report. How dare some vile human write that about my innocent GORGEOUS boy.

"I hope whoever you are you go back to your sad, miserable, little hole and disappear !!!"