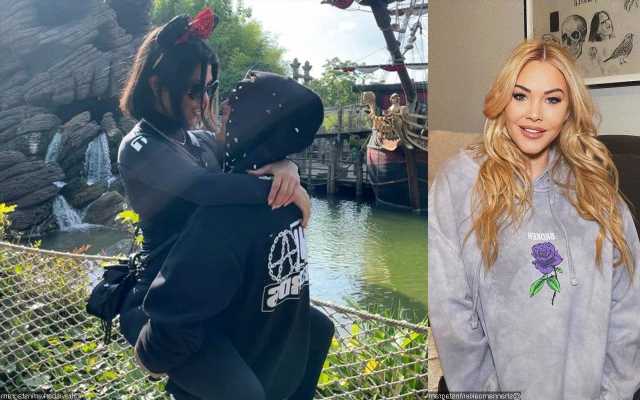 Shutting down rumors suggesting that she is jealous of the newly-engaged couple, the former Miss USA insists that she is now ‘very happy where I am at in life.’

AceShowbiz –Shanna Moakler claimed she’s not aware of her ex Travis Barker‘s engagement to Kourtney Kardashian. When asked about the matter, the former Miss USA claimed that she hasn’t “heard anything about it.”

“Really, they got engaged? I didn’t think about it,” the 46-year-old told Page Six during a recent outing with her on-again beau, Matthew Rondeau, in Woodland Hills, California. “I haven’t heard anything about it.”

Regardless, Shanna said she’s “super happy” for Travis and Kourtney. “I think they’re very deserving of one another. I hope they get good ratings,” the mother of three further noted.

When asked about whether she’s jealous because of her apparent shades on social media, the former winner of the Miss New York USA pageant cracked up and explained, “I’m not jealous or bitter. I honestly am very happy where I am at in life.”

Travis proposed to Kourtney on October 17 at Rosewood Miramar Hotel in Montecito, California. However, Shanna seemingly found it unpleasant as she took a break from social media after the couple broke the news. A source additionally told HollywoodLife.com that the model was hurt knowing that her kids, Landon and Alabama, went to the lovebirds’ engagement party. She’s also caught removing all recent pictures with her children from her Instagram page.

As for Shanna, she allegedly parted ways with Matthew in April. It was not until July for Matthew to confirm their split. “I broke up with Shanna months ago, and I’m happier than I have ever been,” he admitted when speaking to Life & Style Magazine. “I’m focusing truly on finding myself again as a person emotionally and mentally.”