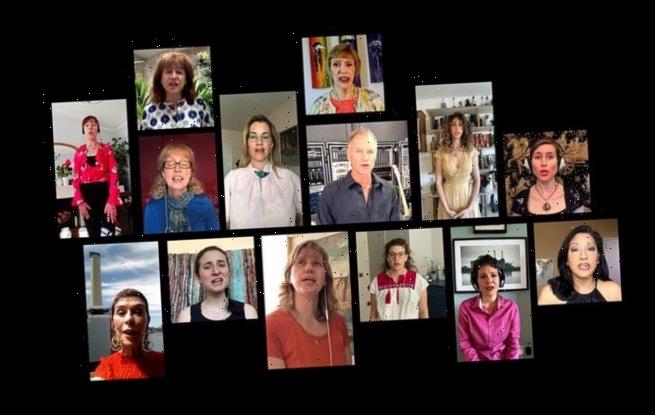 Last month he was saddened by the death of his beloved tour manager of 40 years, Billy Francis, inspiring him to write a tribute, in which he reflected that he ‘couldn’t have had a better teacher, big brother, protector, mentor’.

Then he was forced to cancel his residency in Las Vegas. But today, Sting has cause to celebrate.

He has, I can disclose, just unveiled his own lockdown anthem, produced in tandem with the most improbable collaborators in his dazzling film and pop career — including a fishmonger.

All are members of the 70-strong Battersea Power Station Community Choir, formed in 2016 when the iconic London building was re-born as a residential development. 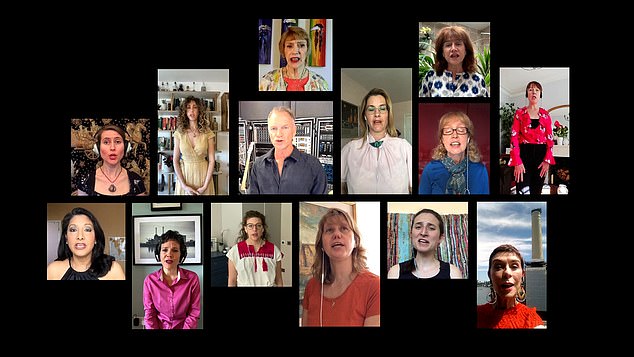 A few weeks ago, the choir was holding its weekly rehearsal when its founder, Alex Baker, startled members by introducing them to Sting — albeit by Zoom

A few weeks ago, the choir was holding its weekly rehearsal when its founder, Alex Baker, startled members by introducing them to Sting — albeit by Zoom.

Aware that Sting was in lockdown in the power station flat he and his wife Trudie Styler bought five years ago, Baker sent her eminent neighbour the choir’s rendition of Something Inside So Strong.

Shortly afterwards, Baker received an invitation, asking if the choir would collaborate on a version of Hymn, a song Sting wrote for his musical, The Last Ship.

‘Sting joined the choir for rehearsals,’ his spokesman tells me.

Though Sting has properties in Wiltshire and the Lake District — as well as in Malibu and Tuscany — he holds Battersea dear.

‘It was the first place I lived when I moved to London,’ he says, adding that the power station reminds him of his hometown, Wallsend [on Tyneside] — ‘when I lived next to the shipyard. We all need our community now more than ever.’ 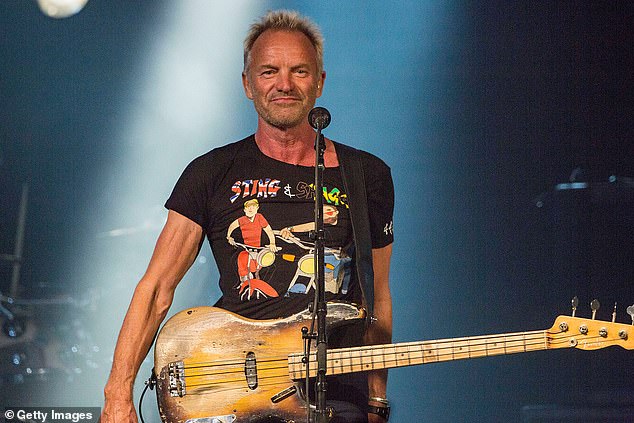 Glastonbury organiser Emily Eavis urged fans not to make their way to the Somerset site last weekend, despite the music festival’s cancellation owing to the crisis. ‘There’s usually a few waifs and strays,’ she says. ‘There was a guy who’d walked all the way from France to see Radiohead on our last year off. I felt so bad for him, he was so tired.’

Amelia eats up all her greens

When the Tatler cover star and aspiring fashion designer tucked into a plate of greens, including broccoli, she made a meal of it by co-ordinating the dish with her outfit. Sporting an olive-green top and a similarly coloured skirt, the Duke of Kent’s 24-year-old granddaughter dressed the table with a green cloth and baby cactus. ‘Seasonal Greeningz,’ she captioned the picture. Bon appetit! 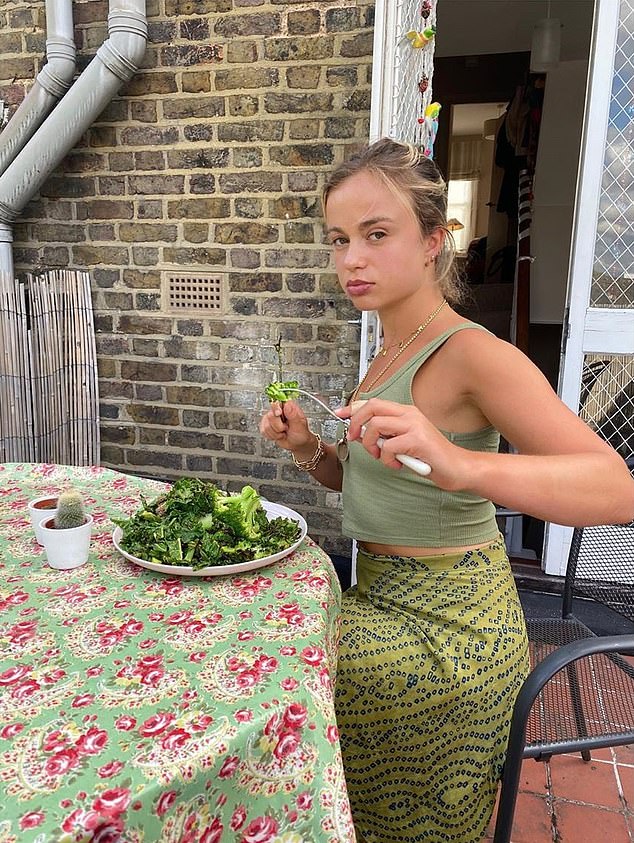 Hats off to Clarissa Avon, who celebrated her 100th birthday on Sunday. Anthony Eden’s widow and a former Oldie of the Year was given a small, socially distanced alfresco lunch in her London apartment by her niece, Sally Ashburton. Fellow guest royal historian Hugo Vickers says: ‘Over the years, I have come to relish what I think of as her “positive negativity”. She once expressed the wish to leave a dinner in Patmos, with: “I think we have exhausted the social possibilities of this evening, don’t you?” ’

Matthew Rhys, star of the new version of classic legal drama Perry Mason, has been spending lockdown in the Catskill Mountains in New York State. ‘Every night the kids say: “Can we have a dog?” and I go, “No”,’ Rhys says. ‘But a bear came close to the house, so they’re now saying: “Well, if we had a dog, it would warn us about the bear.”’

Cleaning up your Freddie act, Kate?

Pearl Harbor star Kate Beckinsale took her obsession with the late Freddie Mercury to new heights at the weekend to mark Pride, a celebration of the LGBT community.

The 46-year-old motherof-one impersonated the singer by dressing as he did in the video for Queen’s 1984 hit, I Want To Break Free, which included pushing a vacuum cleaner around.

Completing the look with a pink top, leather skirt, thigh-high stockings and black high heels — plus black wig and fake moustache — Kate, who admits to being a ‘horrible singer’, spared her fans by lipsyncing in the video she shared online.

Pearl Harbor star Kate Beckinsale (left) took her obsession with the late Freddie Mercury (right) to new heights at the weekend to mark Pride, a celebration of the LGBT community

Combined reserves in his two main companies went down from £9.1 m to £8.5 m, according to figures covering the 12 months to the end of June 2019.

That was the period just before his acrimonious bust-up with girlfriend Summer Monteys- Fullam when he demanded she sign a non-disclosure agreement about their relationship.

Neither company reveals how much Hollywood paid himself, but he was hit with a £255,000 tax bill for one of the firms.

The two companies manage his media income from shows such as Bake Off as well as other commercial interests.

After splitting with Summer last year, Hollywood had a clear-out of his fleet of cars and splashed £100,000 on a SVR Range Rover.

After Firth, Livia falls for a skunk!

The eco-fashion campaigner reveals she is now besotted with a female companion named Iris — a skunk — and shared a picture of their first encounter online. Livia, 50, who has two sons with Firth, the star of the The King’s Speech, was visiting her friend’s farm at the weekend in her home country of Italy, where she wore a vintage skirt re-fashioned as a strapless dress.

‘The first skunk I have ever met, and I am in love,’ she declares. 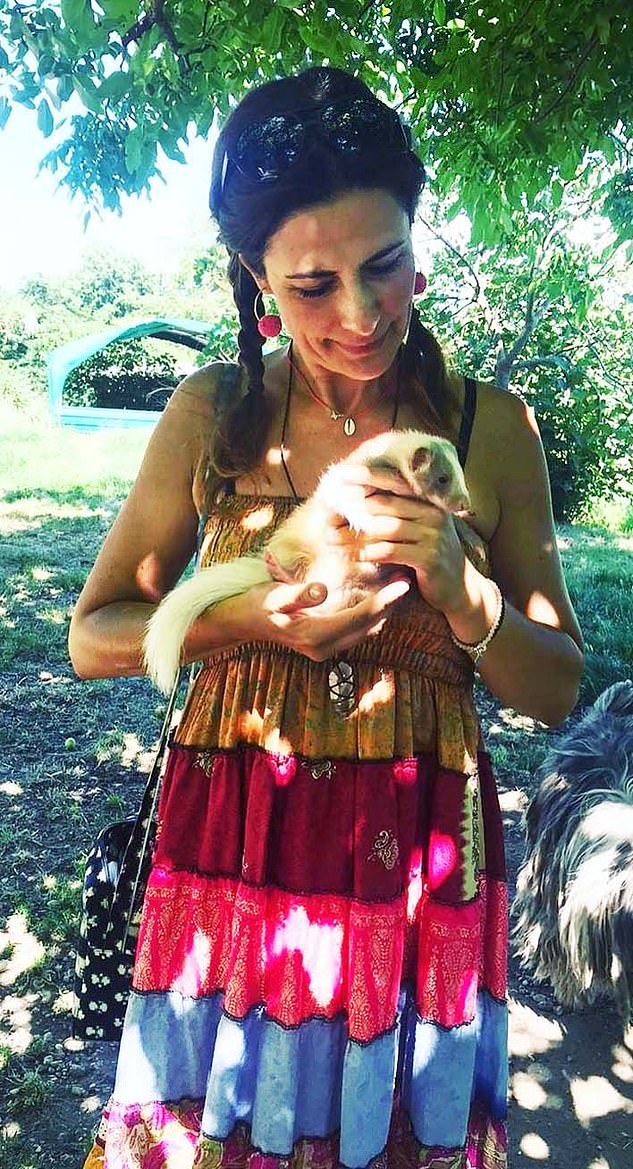