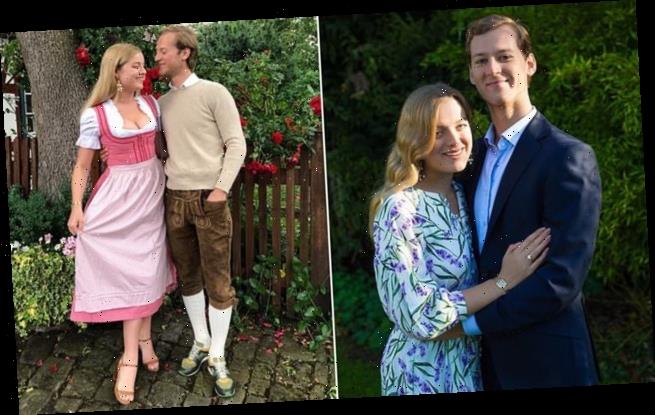 Prince Harry is not the only royal from the younger generation to find love overseas. While he married an American actress, his cousin Flora Ogilvy has got engaged to a sporty Swede.

The 24-year-old granddaughter of Princess Alexandra is to wed Timothy Vesterberg, 26, who was a professional ice hockey player in his native Sweden.

‘We’re engaged,’ confirms Flora, a great-great-granddaughter of George V. ‘My beloved Timothy asked me to marry him and we’re blissfully happy.’

She shows off her sparkler in this picture taken by her father, the landscape designer and photographer James Ogilvy. 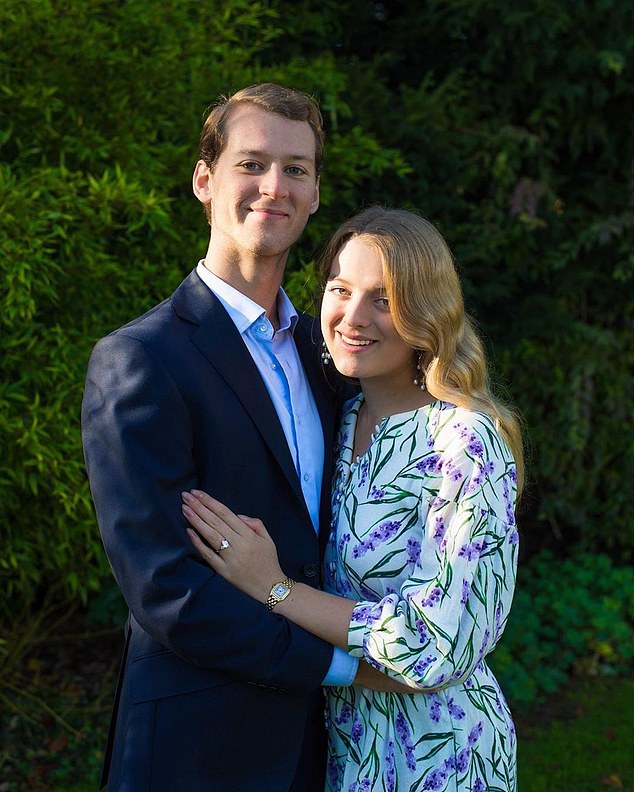 She shows off her sparkler in this picture taken by her father, the landscape designer and photographer James Ogilvy

‘Always and forever,’ comments Vesterberg, who became an investment manager after hanging up his hockey stick and is now based in London, where Flora works as an art consultant. The couple decline to say when the ceremony will be held, but royal weddings usually take place within six months of an engagement announcement. 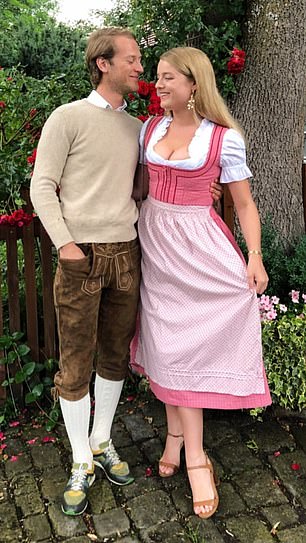 The 24-year-old granddaughter of Princess Alexandra is to wed Timothy Vesterberg, 26, who was a professional ice hockey player in his native Sweden

It means there are likely to be two royal weddings next year, as Princess Beatrice has already announced her engagement to property devel- oper Edoardo Mapelli Mozzi.

Flora is a regular on the balcony at Buckingham Palace with the Queen at Trooping The Colour and has been a guest at most recent royal weddings, except that of Harry and Meghan last year. The Duke and Duchess of Sussex didn’t invite any of the children and grandchildren of the Queen’s cousins, the Duke of Kent, the Duke of Gloucester, Prince Michael of Kent and Princess Alexandra.

The move was particularly striking as there was no pressure on space, given that Meghan had only a handful of members of her family there and St George’s Chapel has space for 800.

Flora’s pals are pleased she’s found happiness, as she declared last year that she was too busy for love, explaining: ‘I can’t even think about going there.’

Old Etonian Alex Gilkes appears to be following in the footsteps of his friend, the Duke of Cambridge, who toured Africa last year as president of United For Wildlife.

Keen to learn about endangered animals, the 40-year-old ex-husband of the Duchess of Sussex’s best friend, Misha Nonoo, has taken his girlfriend, Wimbledon champion Maria Sharapova, 32, on safari.

‘Our week culminated in a meeting with the mountain gorillas in beautiful Rwanda,’ says Alex, founder of online auction house Paddle8. ‘Rwanda has been so successful in conserving these national symbols that the mountain gorilla is no longer critically endangered.’

Pippa and the in-laws raise a glass to sobriety

The Duchess of Cambridge’s sister Pippa Middleton ditched booze earlier this year to get back in shape after giving birth to her son, Arthur.

This week, the 36-year-old, who is married to hedge fund manager James Matthews, turned out to support her brother-in-law Spencer Matthews’s new low and zero alcohol brand, The Clean Liquor Co.

The former Made In Chelsea lothario, who is now married to Irish model Vogue Williams, 34, with whom he has a one-year-old son, Theodore, launched the company in London.

‘Alcohol just got in the way. It affected my work life, my clarity and my creativity,’ Spencer, 31, tells me.

‘In the year-and-a-half that I’ve been sober, and in the comfort of married life, Vogue and I have welcomed our son and become a family of our own. We’re happy.’ 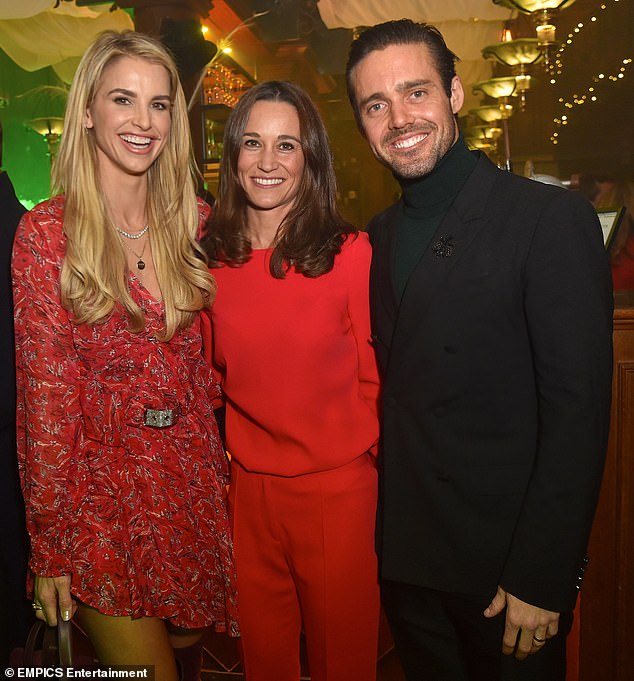 Ladies in red: Vogue and Pippa with Spencer at the low-alcohol launch

She is the nation’s favourite actress, an Oscar winner and a life-long Labour supporter.

But is Dame Judi Dench wavering in her loyalty to Jeremy Corbyn’s party? ‘I have no idea at the moment [who to vote for],’ she tells me. ‘I am more concerned about the young people, whose future it is, and inspiring them to vote.’

Dame Judi, 84, was speaking at a champagne launch of Lymphoedema Christmas charity cards at Fortnum & Mason.

Her current political indecision contrasts with her fervour back in the heady days of New Labour.

In 2009, she recalled of Tony Blair’s election victory in 1997: ‘I just remember dancing in the streets when Labour got in.’ She also once went on a Ban The Bomb march with Vanessa Redgrave, a contemporary of hers from drama school.

Former Labour donor and singer Mick Hucknall has already deserted Corbyn, calling him ‘spineless and cowardly — he’s not fit to lead this country. And the same goes for John McDonnell and Diane Abbott’.

M&S model David Gandy is not just a pretty face — he’s turned quite a handsome profit too, with his own fashion brand. ‘I’m fortunate to work in the fashion industry but it is a lot of hard work,’ he tells me at the switching on of the Burlington Arcade Christmas lights. ‘You can’t get stale. I have a business where I’ve turned over, with my brand, £70 million for M&S. That’s not modelling, that’s saying something different.’

Age has not withered actor John Standing, nor has a spell in hospital. The 85-year-old trouper was admitted to hospital for hernia treatment a week ago yet is refusing to cancel his one-man show on December 3 at the Pheasantry — a cabaret and pizza haunt in Chelsea. ‘Heavens no,’ he told me yesterday. ‘I have performed my show in New York and in private houses and Boodle’s Club in London.

‘I tell terrible stories about my life and say f*** quite a lot. In fact, the more I swear, the more people laugh.’

Emilia and Luc get their skates on…

The 45-year-old actress brought her boyfriend, talent agent Luc Chaudhary, 44, whom she has been dating since June, to accompany her as she showed off her skating skills.

The mother of one, who was previously married to actor Jared Harris before her on-off relationship with fiery TV chef Marco Pierre White, remains optimistic about love.

‘I’m a diehard romantic and I’d love to get married again one day,’ she says. ‘I have to look forward to the future.’ 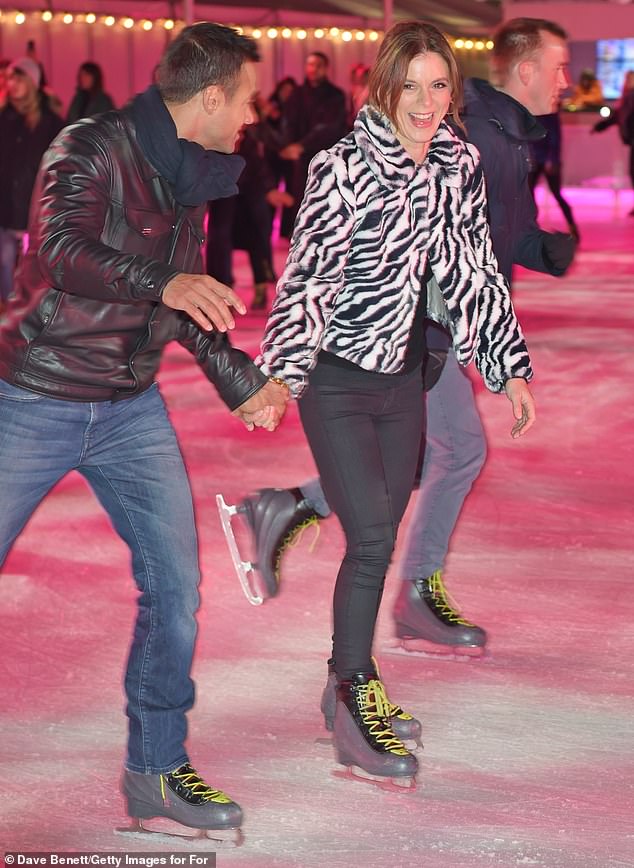