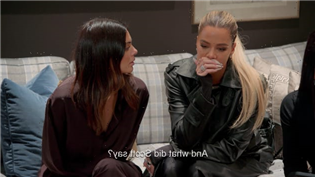 The Kardashians walked viewers through everything that led up to Travis Barker proposing to Kourtney Kardashian.

What the world at large did not know until now is how Scott took the news.

On this week’s episode, we all saw and heard it for ourselves.

Travis proposed to Kourtney in October, meaning that The Kardashians has a slightly lower delay between filming and airing than your average reality show.

Kourt was the last to know, as Kourtney’s friends and family gathered for a surprise party.

Kim admitted that Scott was “going to lose his f–king mind” after he learned that the mother of his children had become engaged.

Travis’ kids, 16-year-old Alabama and 18-year-old Landon, were there for the engagement party.

But while that sounded odd, their own grandmother explained why it wouldn’t have been right to include them in this particular event.

“For us to have to lie to Scott and get them here under false pretenses would’ve been really hard for all of us,” Kris Jenner explained.

Lying to bring three children to a fairly adult party is weird, especially if neither parent can know in advance. It was the right call.

However, after Travis’ proposal, Scott had a heart-to-heart to Khloe, which she shared with her family on camera.

“‘You guys are gonna kick me out now. I’m not involved in the family,'” she quoted Scott as having said.

“And then [he] was asking, ‘Why weren’t my kids there?'” Khloe revealed. “And we said, ‘Because they were too young.'”

Kourtney told the confessional camera: “I think that it’s really important for Scott to be accepting of our relationship so that the kids can feel good,”

She added: “I’m sensitive to him and his feelings and I communicate with him about the kids and I make sure that he’s good.”

“But beyond that,” Kourtney emphasized, “I just got engaged and I want to be happy and be in the moment.”

“I just don’t think that this moment is about Scott,” Kourtney expressed.

Khloe also reasoned that, if anything, Kourtney’s kids might feel like they have to “choose” and are “losing” their dad, which is not the case.

Khloe was clearly thinking back to her own feelings when Kris remarried (the conversation included some awkward deadnaming of Caitlyn, but Cait is in charge of how her loved ones refer to her in the past).

Later in the episode, Khloe stopped by to visit Scott, even bringing a care package for him — tasty comfort food.

“Don’t get me wrong, I’ll always love your sister,” Scott assured her.

“I wasn’t that caught off guard,” he admitted. “I thought that they’d already be married [based on] the way that she was talking.”

“It wasn’t crazy. Thank God,” Scott said of his reaction to the news.

“Because at another time in my life if I’d heard that, life would’ve been over for me,” he admitted.

Scott, having composed himself, said: “It does give me a lot of relief that she’s happy, somebody else is taking care of her.”

“I kind of in a selfish way feel like a lot has been lifted off of me,” Scott expressed.

“I think in the end it’s kind of a good thing. I couldn’t do the job of being with her, so I salute Travis,” he claimed.

Scott continued, shadily: He’s in for a lot of work… Kourtney is not the simplest when it comes to everything.”

Scott had even more to say to the confessional camera.

“I always felt like that was my fault for breaking up our family,” he shared.

“So,” Scott explained, “I always felt like I had this responsibility to be there for her and take care of her and make sure she was all right, even though we weren’t together.”

“I just felt that guilt, so it was a lot to handle,” Scott admitted.

While he claimed to be just fine with the engagement, he did have one major issue: their kids being excluded.

Scott told Khloe: “They didn’t understand why they were watching TikToks of his kids there and they weren’t there.”

“Me personally, if I got engaged 50 minutes away, I’d say, ‘Someone get in the car and drive the kids here,'” he shared.

“[Penelope] would’ve been ecstatic,” Scott said. “We’re acting like the place is 10 hours away.”

Scott added: “I just don’t want to be pushed out of family affairs that include the kids and things that we normally would do.”

He emphasized: “I just don’t want to lose the dynamic of having all of you guys.”

Scott went on: “I definitely think Kourtney and I need to speak about certain things that she doesn’t really want to. We’ll get there. We always do.”