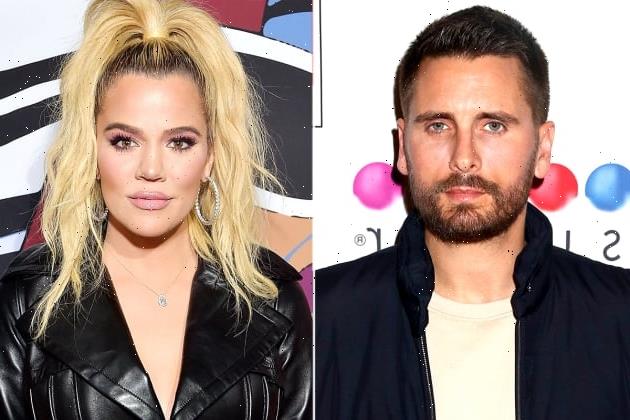 By now, you’ve probably heard about the latest major development in the life of Kourtney Kardashian:

After less than a year of dating, Blink-182 drummer Travis Barker popped the question to Kourtney, and she said yes!

That’s exciting news for the happy couple, of course, but there are some folks who are less than thrilled about the engagement.

Chief among them is Kourtney’s baby daddy, Scott Disick, who has not been able to hide his displeasure with the situation.

Insiders say Disick has been suffering a full-blown breakdown in the days since Kourtney and Travis went public with their engagement.

Some have gone so far as to claim that Scott hates Travis, although that seems like it might be a bit of an exaggeration.

The more likely explanation is that Scott feels a bit betrayed by Kourtney.

And according to a new report from Hollywood Life, Kourt’s not the only Kardashian who’s on Scott’s sh-t list these days.

Longtime viewers of Keeping Up With the Kardashians know that Scott and Khloe have always enjoyed a particularly close relationship.

So it’s not surprising that Scott was upset to learn that Khloe knew her sister’s engagement was coming — but decided not to give Disick a heads up.

“Khloe and Kris [Jenner] knew that Travis was going to ask Kourtney to marry him and they could’ve prepared him for the news,” a source told the outlet.

“Instead. they pretended that they didn’t know anything and kept him in the dark. He doesn’t know if he can ever forgive them for this. Scott has been there for Khloe through all of her darkest times and he would always stick up for her whenever anyone came for her,” the insider added.

“She always made him believe that she was his sister and that there was nothing she wouldn’t do for him.”

Obviously, Scott shouldn’t expect Khloe to be more loyal to him than she is to Kourtney.

But insiders say that Khloe exacerbated the situation by misleading Scott about the seriousness of Kourtney and Travis’ relationship.

“Khloe and her sisters led Scott to believe that this whole Travis thing was a phase and that they were rooting for him,” the source said.

“But when the engagement took place, Khloe jumped ship and liked every single post that Kourtney and Travis posted on Instagram,” the source revealed.

“Scott expected this from Kim, but Khloe and Kris always had his back and always insisted that they wanted nothing more than for him and Kourtney to hash it out and be together.”

Khloe has apparently been acting as a sort of middle man between Kourtney and Scott for several months now.

When Kim Kardashian hosted SNL earlier this month, Khloe even contacted Disick to let him know that the Kravis romance would be the subject of some envelope-pushing jokes.

“Khloe and Kim made sure that Scott knew about the SNL roasting and he was all about it,” the source told Hollywood Life.

“And just before that, Khloe came to support him at his clothing line launch.”

Insiders say Scott was even upset to see that Khloe had congratulated Kourtney and Travis following their engagement.

“I’m so happy for you my beautiful sweet sister! You deserve every kiss. Every ounce of love. Every happy thought,” Khloe wrote on Instagram.

Sure, the two of them have become quite close over the years.

But at the end of the day, Kourtney is still her sister.