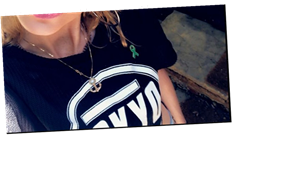 Sarah Harding has revealed her dreams of becoming a mother have been stolen after undergoing intensive chemotherapy for her breast cancer.

The 39 year old singer announced in August last year she had been diagnosed with breast cancer which advanced to other parts of her body.

While she has been having chemotherapy and radiotherapy, Sarah wrote in her book Hear Me Out it makes her “cry” thinking about how she won’t ever get the chance to have children.

“It might seem odd to worry about not having children when I don’t even know how much of a life I have left, but it’s there,” she shared. “The truth is, even if my prognosis is better, it still wouldn’t be on the cards because of all the chemotherapy I’ve had.

“That treatment, harsh as it is, will have killed any chance I might have had. It’s making me cry just thinking about it.”

Sarah, who was told by doctors that her Christmas 2020 would “probably be her last”, also spoke about how badly she wants to feel like herself again. “Sometimes, it’s like every single part of your body is screaming at you that you’re not the person you think you are in your head; that you can’t possibly be that person again,” the star bravely told her readers.

“That’s how I’m feeling right now. I want to get back to normal so badly.”

Sarah added: “It’s all I want, just to feel like me. But I know that’s never going to happen again.”

It comes after the Big Brother star revealed her treatment seems to be working as her brain and lung tumours have shrunk.

“Before I put this book to bed, I wanted to share a little bit of positive news,” she stated.

“MRI scans at the end of December revealed that the tumours in my brain and in my lung have shrunk a bit with the treatment."

Sarah also added she is focussing on enjoying “every second of my life, however long it might be”.

She went on to explain: "I am having a glass of wine or two during all this, because it helps me relax. I’m sure some people might think that’s not a great idea, but I want to try to enjoy myself.

“I’m at a stage now where I don’t know how many months I have left. Who knows, maybe I’ll surprise everyone, but that’s how I’m looking at things.”