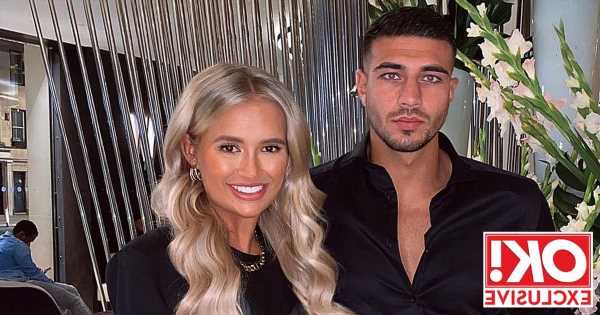 The past few years have thrown us plenty of surprises and while they haven't all been good ones, there's plenty to look forward to in 2022.

And while it's tough for most of us to guess what might be around the corner, celebrity psychic Sally Morgan has shared her insight into what we can expect.

From pregnancies and weddings to huge career triumphs, it looks like these stars – including Strictly Come Dancing contestants, Love Islanders and TOWIE favourites – could have plenty to celebrate.

Last year was huge for Love Island star Molly-Mae Hague, with the 22 year old being announced as the Creative Director of fashion brand Pretty Little Thing.

And while the career success will continue, Sally predicts a huge addition to Molly-Mae and boyfriend Tommy Fury’s life in 2022.

Sally says: “I see a pregnancy for Molly-Mae. I think she really wants a child and she’ll be pregnant this year. She’s going to feel very fulfilled and she’s doing what she wants. March is a month where she’ll be moving forward, she’ll get a lot of work then.

"But her personal life is going to interrupt decisions around her career. She’ll try to juggle both, but she’ll find it difficult to concentrate.” Tommy, 22, may have made waves in the boxing world last year, but Sally doesn’t reckon he’ll quite reach the levels of brother Tyson.

Sally reveals: “He won’t succeed in following in his brother’s footsteps. Boxing will be something that is his career, but there are lots of ways to do it – you can be a promoter, coach, or own a gym. He’s going to make hay while the sun shines on the name, but he has lots of difficulties coming this year. He’ll get through them, but 2022 isn’t the best for him. “

The 47-year-old has had her fair share of heartbreak over the last few years, but Sally is convinced that 2022 is the year the singer will find lasting love.

She explains: “Louise has got her life together now and moved on from her marriage. She’s such a lovely person and this year will see her dating again – and there might not just be one guy!

Between busy careers, family commitments and a house renovation, it’s been a busy few years for Mark Wright and Michelle Keegan. But according to Sally, this year will test the couple. Sally says: “I think they are very much in love, but there will be challenges in their relationship this year.

"A few cracks will appear. They can be healed, but a lot of pressure will be put on them. It has nothing to do with money, it’s to do with the dynamics of the extended family.

"They’ll have a really special May – they’ll be busy with work. Their relationship probably works because there are periods when they’re away from each other, absence makes the heart grow fonder.”

For mum-of-three Rochelle, 32, this year will see her juggle her career and young family. Sally says: “Her career is flying right now, but she could want to slow down in 2022. There are going to be wonderful opportunities, but she’ll turn down a lot of work to spend more time at home and around the children.

"She’ll still do bits and pieces with hubby Marvin. There’s longevity there, and they have a good relationship. I see them being together forever.”

The GC is very much in love with boyfriend Rami Hawash and is enjoying being a stepmum, and according to Sally there are big plans on the horizon for her in 2022.

She says: “There’s a wedding on the cards for Gemma. It’s going to be a GC wedding – let your imagination fly, but it will never reach the heights Gemma will be at! She wants a baby.

"She’ll diversify her career and try to do some more serious stuff. She may even be offered her own talk show and go down that route.”

Last yea,r Stacey pushed back her wedding when she announced she was expecting daughter Rose. And now Sally thinks Stacey, 32, will wait until the end of 2022 to marry partner Joe Swash, 39.

“I can see a winter wedding on the cards for Stacey and Joe, it could even be a Christmas one, and Pickle Cottage will be a part of it,” Sally explains. “She has the baby and is a fantastic mum, but she’s also very focused on her career. I don’t think she’ll have another baby, but work opportunities will be on the horizon – she could do another TV series.”

It was tough for Sheridan in 2021, who endured her fair share of challenges, including a break-up from fiancé Jamie Horn. But according to Sally, she will continue to pick herself up.

Our psychic says: “Sheridan wears her heart on her sleeve, she struggles in certain ways and will continue to. But as much as there are challenges, she pulls herself up and gets on with life. I think she’s going to do a Lady Gaga and release an album with someone else, potentially a man. Her musical career is something she gets so much pleasure from.”

AJ’s star turn on Strictly will pave the way for plenty of opportunities this year, Sally tells us. There’s also love on the cards – but not as you’d expect.

“There’s no romance between AJ and Strictly partner Kai Widdrington. I think there’s a great friendship and enormous respect, but I don’t think it goes further than that,” Sally says.

“Her career will fly this year, but at times she could jump into things too quickly and regret it. She’ll have amazing offers, but she shouldn’t rush – she should take her time and choose wisely. There will be other romance on the cards – she has someone who was once in her life teetering on the edge of coming back into it.” It will be a year of great success for our Kerry, 41, as she’ll be on our screens a lot.

Sally says: “For Kerry, 2021 was a springboard where she started to fly. In 2022, she maintains that momentum. Like lots of other celebs, she’ll be offered things on a daily basis and she wants to do it all as she’s the breadwinner in her family.

She has an amazing year ahead and we’ll see her on TV shows, on panels and judging boards. I can see some work in Australia for her too, it’s calling her.”

There’s no doubt Love Island star Dani, 25, had a tough 2021, but Sally sees good things for the mum-of-one this year – in the form of a sibling for little Santiago!

She explains, “I can see her having another baby. I think it will be another boy with her current partner. I predict she’ll marry the person she has her next baby with.” We’re going to see much more of Cheryl, 38, in 2022, but it won’t all be plain sailing for the popstar. Sally says, “Her music career is going to falter, there will be a lot of stop-starts, but she’ll keep going with it.

She may go through a couple of record labels, but it shows me that she is tenacious and determined to have another hit. She’s incredibly private about her love life, but there will be another man. She will find love in 2022!”

Lisa may be loved-up with boyfriend James Green, but the road ahead might be a bit bumpy.

Sally says, “She’s an amazing make-up artist and will continue to be succcessful in her career. She struggles at times to trust men, so her relationships can be tricky. She’s a very independent, strong lady.”

For all the latest celebrity interviews and exclusives, sign upto OK!’s daily newsletter.