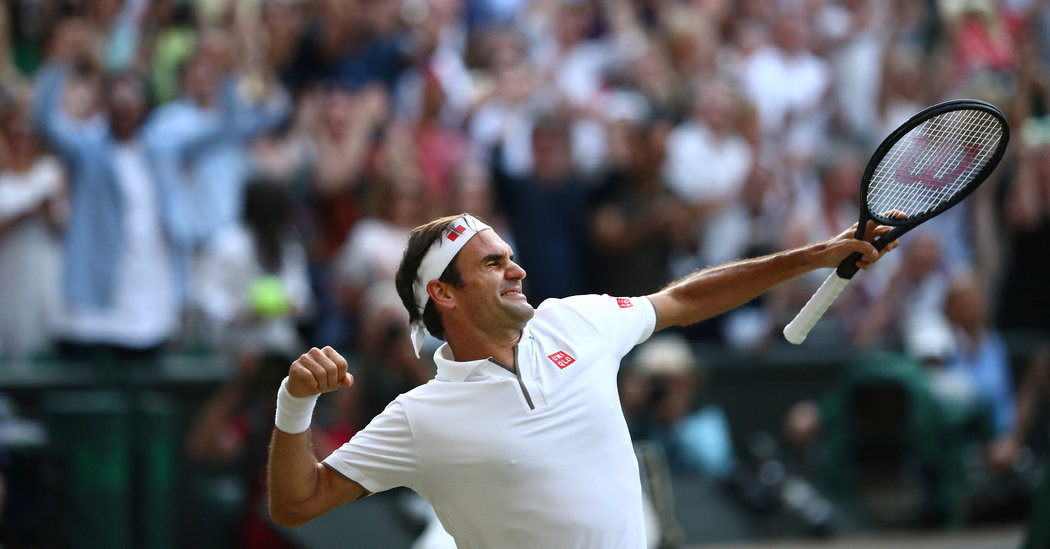 WIMBLEDON, England — This one, unlike Roger Federer and Rafael Nadal’s 2008 duel into the twilight on Centre Court, was not a contender for the greatest match of all time.

This was only a semifinal, after all, but it still had its moments, both tense and transcendent. It also had a different finish.

Nadal won that magnificent 2008 Wimbledon final, prevailing 9-7 in the fifth set after four hours and 48 minutes, finishing in something much closer to darkness than daylight.

“It lived up to the hype,” said Federer, who will face Novak Djokovic, the defending champion, in Sunday’s final.

Federer was correct. Even though the match lacked the consistent mutual excellence and set-by-set tension of its 2008 precursor, palms still got sweaty in the stands, and Federer and Nadal still came up with strokes of genius under duress that brought fans almost involuntarily to their feet.

These two uncommonly friendly rivals, who are scheduled to play a charity exhibition together in South Africa in February, should get extra credit for being able to play another such Wimbledon match after 11 years and all the changes in their lives.

Federer is now a father of four. Nadal owns and helps operate his own tennis academy on Majorca, his island home in Spain. They have earned hundreds of millions of dollars in the last 11 years, and yet they push on and push each other on.

“We know that every time there are less chances to play against each other in these high quality, highly important matches,” Nadal said.

That said, it is too easy to obsess over age at this stage, to shake your head at Federer’s ability to handle the pace and the pressure with his 38th birthday looming next month. Too easy to marvel that Nadal, at 33, has the same unquenchable thirst for victory that he possessed when he was 22, though then with quite a bit more hair and no sleeves.

But down the stretch on Friday, such thoughts receded as these great athletes tested the limits of each other’s talents and nerves.

The match was mesmerizing in the fourth set, not because Federer and Nadal were defying time, but because they were defying each other. 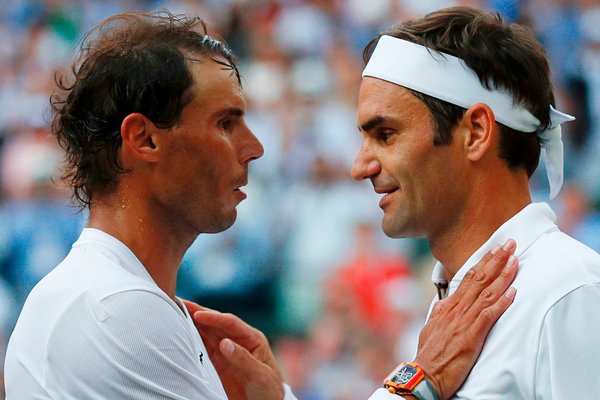 “They aren’t thinking about age out there, I can tell you that,” said Jarkko Nieminen, the retired left-hander from Finland who warmed Federer up to face Nadal on Friday.

The victory earned the second-seeded Federer a chance to renew another grand rivalry, this one with Djokovic, the world No. 1.

Djokovic advanced earlier in the afternoon on Centre Court with a hard-fought 6-2, 4-6, 6-3, 6-1 victory over Roberto Bautista Agut.

Bautista, a flat hitter from Spain, had beaten Djokovic twice this year on hardcourts on the regular ATP Tour. He won many more baseline duels on Friday.

But in a best-of-five-set format, Djokovic’s staying power and ability to rise up on the biggest points were too much to overcome.

Djokovic, 32, has won four Wimbledon singles titles. Federer has won a record eight and is the oldest man to reach the Wimbledon final since a 39-year-old Ken Rosewall lost to Jimmy Connors in 1974.

“I’ve played with Roger in some epic finals here a couple a years in a row,” Djokovic said. “So I know what to expect.”

Federer now holds a 3-1 edge over Nadal at Wimbledon. But Djokovic holds a 2-1 edge over Federer, having beaten him in the 2014 and 2015 finals.

Djokovic has cracked the code on grass with his ability to return Federer’s serve effectively, to stay tight to the baseline in rallies, and to defend and counterattack well in the corners.

Federer needs no reminding, and after summoning the intense concentration and enormous energy necessary to defeat Nadal, he must regather himself and try to do the same against Djokovic, who leads their head-to-head series, 25-22.

“Of course it’s difficult,” Federer said. “For the younger guys to get over the hump, they have to beat two of us in a row, which is something very tough to do. I know it too well myself. Rafa, as a lefty, poses different problems to me or others than Djokovic does. Djokovic stays on his line, hits flat, moves differently and covers the court differently. So for this you have to adjust tactically.”

“But the most important thing is the confidence,” he said. “If you don’t have the confidence, it’s very difficult to beat Rafa and Novak back to back.”

Federer has yet to do it in a Grand Slam tournament, but he demonstrated plenty of belief in himself on Friday. Though Nadal still leads their series, 24-16, Federer has won six of their last seven matches, the only loss coming on red clay last month in the semifinals of the French Open.

At Wimbledon, with the ball bouncing lower and his serve clicking, Federer won a remarkable 62 percent of his second-serve points against Nadal and finished with 51 winners to 27 unforced errors, despite driving the majority of his backhands instead of slicing them.

Federer took control of the first-set tiebreaker by winning the final five points. He then rebounded quickly after an ugly, unsettling passage of play in the second set when he mistimed shot after shot and lost 20 of the set’s final 23 points.

But while Nadal’s emotions have become easier to read since 2008 — it is now possible to surmise from his body language if he is winning or losing — Federer was more impassive than usual on Friday. He kept the mid-match celebrations and perseverations to a minimum, not even cracking a smile when he hit one of the best shots of the match, a sprinting backhand crosscourt winner off a short ball that no 37-year-old (or 27-year-old) had any business reaching.

Above all, he summoned the inner peace to shrug off Nadal’s fire and intermittent brilliance in the closing games as the Spaniard tried urgently to recover from an early break of serve in the fourth set.

Serving at 3-5, Nadal saved two match points with excellent serves and held serve with a lunging drop volley winner and an ace.

Federer then served for the match, missing an overhead from deep in the court at 30-all to give Nadal a break point. But Federer shook off that gaffe and averted the danger when Nadal missed a sliced backhand approach shot into the net, an error that was emblematic of his day.

“I had small chances, a couple of ones, and was not able to convert,” Nadal said. “I just didn’t play as well as I’ve played earlier in the tournament.”

It was deuce, with the court covered in shadows and shouts of “Roger” and “Rafa” coming from the stands.

“Quiet, please,” said James Keothavong, the chair umpire, just as Pascal Maria had repeated so often with the 2008 final hanging in the balance.

But this was Federer’s moment on Centre Court. And after he secured the final two points, with Nadal’s last backhand sailing long, Federer pumped his arms and grinned, then walked forward to give his friendly rival a firm handshake and a few pats on the back.

Unlike 11 years ago, no trophy ceremony awaited them. This time, Djokovic awaits Federer, and it would be quite a surprise if he did not pose a stiff challenge on Sunday.

The thought of it was enough to make Federer remember, for a change, that he is 37.

“Age kicks in,” Federer said of the recovery process. “I know it’s not over yet. There’s no point to start partying tonight or get too emotional, too happy about it, even though I am extremely happy.