Rihanna looked cozy and comfortable for a dinner date that may hint at a musical collaboration.

On Tuesday night, the singer was spotted out with John Mayer in Los Angeles. For the meeting, she opted for a comfortable loose-fit ensemble—a brown twisted crop top, an oversized tan knit cardigan, and a pair of wide-leg jeans—and accessorized with chunky layered necklaces. Mayer looked equally relaxed in an open patterned shirt worn over a simple white T-shirt and jeans.

Though their meeting was rumored to be about business, Rihanna and Mayer have also reportedly been friends for years. Per Page Six, Katy Perry introduced them in 2013, back when she and Mayer were dating. 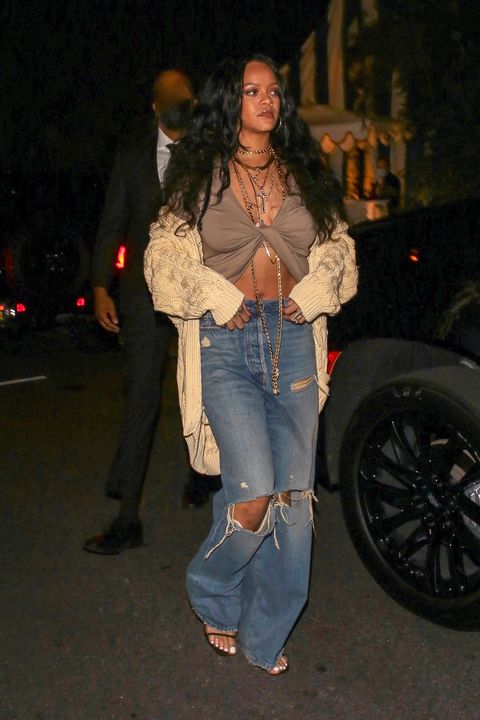 The newly minted billionaire has remained busy with her own professional engagements. She recently launched the third edition of her Savage x Fenty fashion show, with various celebrities, including Emily Ratajkowski, Gigi Hadid, and Vanessa Hudgens, strutting a runway in pieces from her latest collection.

She’s also been collaborating with boyfriend A$AP Rocky on songs for his upcoming album, All Smiles. Back in July, the two were spotted cozying up atop a fire escape in New York City while filming a music video for what is presumably a track on the rapper’s upcoming album. The pair each wore fuzzy neon while filming: Rihanna in a bright pink coat and Rocky in a coordinating neon-green hat.

Rihanna and Rocky were officially confirmed as a serious item as of December 2020, following a romantic trip to Barbados, though their romance has been budding privately for years. Back in May, Rocky gave an interview to GQ about his feelings for Rihanna, confessing to the magazine that the singer is “the love of [his] life” and “the One.” He also mentioned that he’s loved collaborating with her, saying she’s “absolutely” been a source of inspiration throughout his musical creative process.