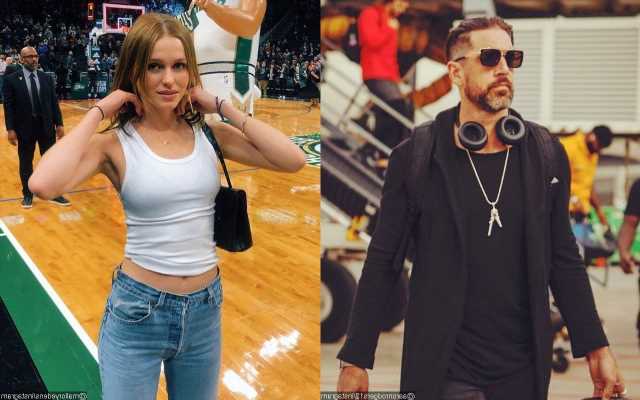 Last month, the Green Bay Packers quarterback was spotted celebrating his 39th birthday with the 26-year-old model as they’re seen sitting next to each other at a Milwaukee Bucks game.

AceShowbiz –Aaron Rodgers has found a new girl. If a new report is to be believed, the Green Bay Packers quarterback is dating model Mallory Edens, the daughter of Milwaukee Bucks owner Wes Edens.

On Wednesday, January 4, Sportsgossip.com confirmed that the 39-year-old football player is currently in a relationship with the model. “Well, it has finally happened. Mallory Edens has had her eye on Aaron Rodgers for a very long time,” the so-called insider said.

“Mallory has always wanted to be in the public eye. It looks like she might’ve found her ticket. Mallory was at the Packers’ last game, and she was supporting her new boyfriend and favorite team by wearing their gear,” the informant further said. “Nothing says I’m all in like throwing on your boyfriend’s team’s gear.”

Last month, Aaron was caught celebrating his 39th birthday with Mallory. He was photographed sitting next to the 26-year-old beauty at a Milwaukee Bucks game. They were joined by his teammate, Green Bay Packers wide receiver Randall Cobb.

That wasn’t the first time Aaron was joined by Mallory courtside. The model shared a photo of herself and the quarterback at a Bucks game in 2019 on her Instagram page. Fast forward to April last year, Aaron was also snapped sitting next to her inside the Fiserv Forum while cheering on the Milwaukee Bucks.

Previously, Aaron was romantically linked to Blu, real name Charlotte Brereton. They were first linked in June last year. They were spotted with similar tattoos shortly after, but their whirlwind romance reportedly came to an end, with Blu currently stuck in Peru in the middle of political unrest.

Prior to dating Blu, Aaron was engaged to Shailene Woodley. The duo began dating in 2020, then first split in February last year, ending their engagement amid controversy over statements the athlete made about COVID-19 and his vaccination status. They then reunited to give it another shot, only to end it again for good in April 2022.

More recently, Shailene sparked rumors that she’s dating her “The Fault in Our Stars” co-star Ansel Elgort after they’re seen snuggling up to each other during an Italian dinner. In photos posted on Ansel’s Instagram feed in September, the two shared a cuddle at a restaurant. Adding more fuel, a few weeks later, Ansel’s longtime girlfriend Violetta Komyshan announced that she’s “single.”