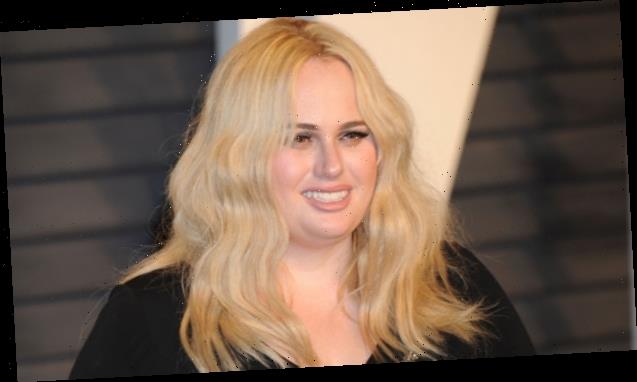 Rebel Wilson ventured out to an abandoned zoo in Los Angeles, where the ‘Pitch Perfect’ star explored old animal closures in a fab workout outfit!

Rebel Wilson, 40, ventured off the beaten path for her latest hike. On Oct. 19, the Isn’t It Romantic star explored the Old Los Angeles Zoo historical landmark, which once used to operate as the Griffith Park Zoo between 1912-1966. The zoo has long been abandoned and has since been converted into a hiking trail and park, but the old animal enclosures and cages have been left in-tact (well, for the most part). The eerie surroundings served as the perfect backdrop for a spooky photo shoot.

Rebel posed in front of a stone cave in one of her Instagram photos, rocking a navy Tommy Hilfiger T-shirt with shiny spandex pants in a steel color. She matched her high-sheen workout pants with a holographic visor that also doubled as a face shield (a smart solution for protecting yourself against UV rays and the coronavirus). In another video, Rebel got a little silly as she used this visor/face shield to hide her face as the introduction to the song “The Strip,” from the 1959 Broadway production Gypsy, played.

On her Instagram Story, Rebel shared another photo of herself posing inside one of the cages! Even behind aging iron bars, the Australian actress still manages to look fabulous. In May of 2020, she revealed her goal weight of 165 pounds. “I’ll be honest with you guys—with my ‘Year of Health’ mission I’m trying to get to 75kg’s and career wise am trying to get one of my movies into production before the end of the year,” Rebel wrote in the since-deleted message (75 kilograms converts to 165 pounds).

Rebel has followed through on her weight loss goals since then, and revealed by October 4 that she was only “3kg’s” (or six pounds) away from reaching her goal weight. When she’s not working out, Rebel’s spending time with her new beau, Anheuser-Busch brewery heir Jacob Busch, 29 (pictured above). A day before Rebel’s zoo hike, she and Jacob enjoyed a night out at Nights of the Jack, which is a Halloween attraction in Calabasas that allows visitors to drive through and marvel at pumpkin carving installations!