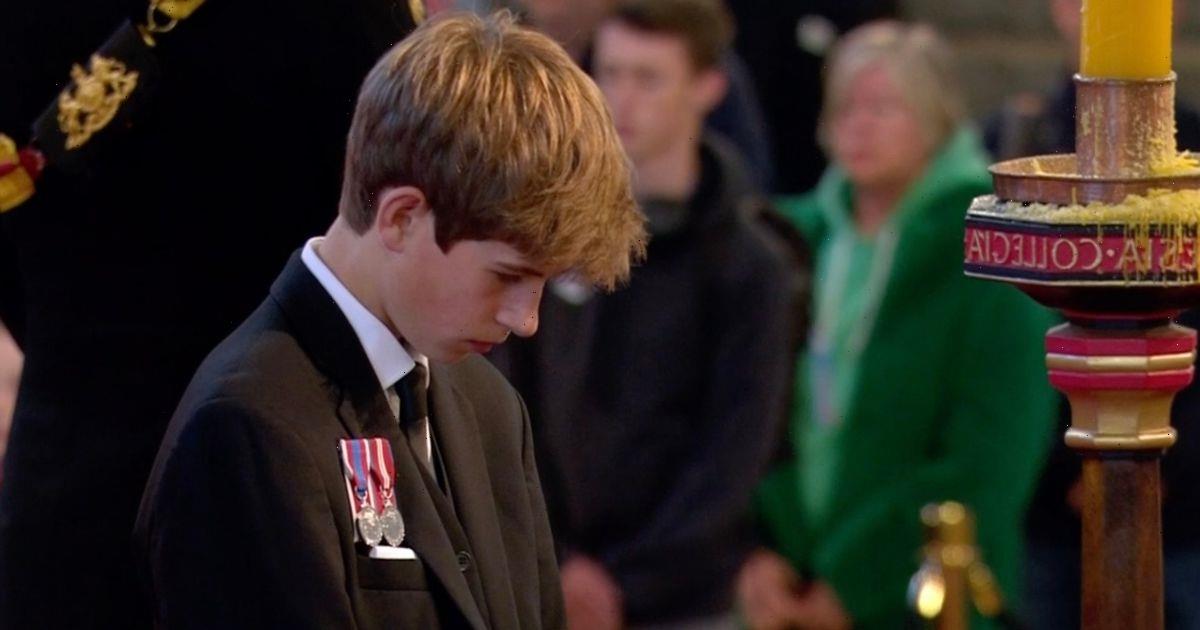 The Prince of Wales, 40, led his brother Harry, 37, and his cousins Zara Tindall, 41, and Peter Philips, 44, Princesses Beatrice, 34, and Eugenie, 32, alongside Lady Louise Windsor, 18, and her younger brother James, 14, as they made their through Westminster Hall before taking their places.

William stood at the head of the coffin, while the Duke of Sussex could be seen standing guard at the rear. James, Viscount Severn, meanwhile, stood on Harry's left – with his bowed down as he donned a black suit.

For all of the latest updates, sign up for OK!'s Royal newsletter

Royal fans couldn't help but praise James for showing incredible strength by taking on the task, while others made a comparison between him and a young Prince William who attended his own mum Princess Diana's funeral in 1997.

"is it me, or does James, Viscount Severn look like a young Prince William here. Reminiscent of Diana's funeral, walking behind the coffin." one person wrote.

Another shared: "Bless all the royal grandchildren for that vigil. Especially the Wessex children: so young and not much in the spotlight, hope someone gave them a hug after. Couldn't help thinking how much James Viscount Severn with his teen floppy hair looked like William at Diana's funeral," with a sad face emoji.

A third said: "Young James Viscount Severn looks so much like Prince William when he was of a similar age and having to go through so much pain publicly, such a brave young man #Respect".

While a fourth added: "Prince William and his last cousin Viscount Severn are really look alike, James really has a lot of William when he was young, they both lost someone dear at the age of 15 #skynews #grandchildren #QueenElizabeth".

Days before the vigil of the grandchildren, Prince William and Prince Harry put aside their differences as they walked in solidarity together behind The Queen’s coffin on her journey to Westminster Hall.

The brothers, who have had a strained relationship in recent years, walked united in grief during the Queen’s procession from Buckingham Palace to Westminster Hall, where the coffin is current Lying-in-State until the funeral on Monday September 19.

William and Harry walking together behind the Queen's coffin was a heartbreaking echo of the funeral of their mother, Princess Diana.

The brothers were aged 15 and 12 when they walked behind the coffin of their mother along with their father Charles on September 6, 1997.

This 100 page tribute looks back at the life of our most beloved monarch, Queen Elizabeth II, marking key events during her remarkable 70-year reign, as well as her childhood as a young princess, her enduring love for Prince Philip and her family, and the lasting legacy she leaves our nation.

This edition is available to buy in stores now or it can be purchased online here.

Discussing the matter, the heir to the throne said to a member of the public who'd laid down flowers for the Queen, as per The Mirror: “He told us yesterday had been particularly difficult and following the coffin had reminded him of his mother’s funeral, of Diana. He said it had been very difficult.”

They added: "I said your mother would be so proud of you and thank you for sharing your grief with us and he said, ‘I’m learning that she was everyone’s grandmother – the way people have reacted’.”