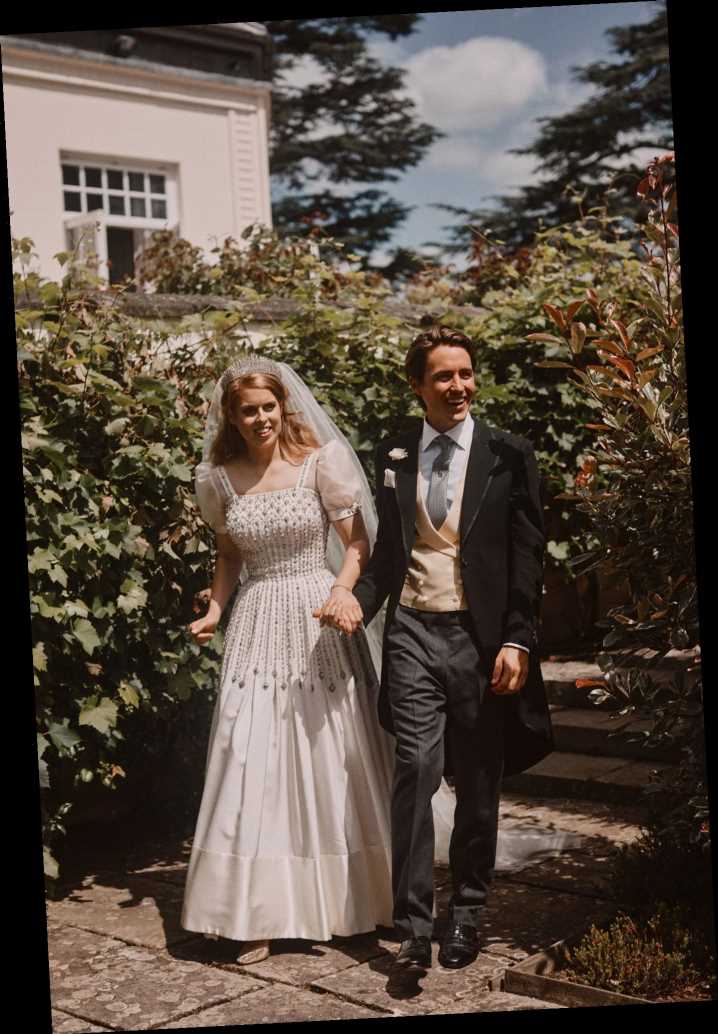 While Princess Beatrice's monogram is topped by a crown, symbolizing her status as a "Her Royal Highness," her new husband did not receive a royal title. Instead, the "E" representing his first name is adorned by a bee — paying tribute to Beatrice's nickname.

Queen Elizabeth's granddaughter has adopted the bumblebee as her own personal symbol, using it on her stationery and even sporting a bee pin at sister Princess Eugenie's wedding in 2018, when she served as maid of honor. The bee makes an appearance on some of the souvenirs above Princess Beatrice's monogram as well. Items in the official wedding collection include a pillbox, a tea towel and even shortbread to keep in a handbag "for emergencies."

"The beautiful and exclusive design shows the couple’s initials surrounded by a bouquet of pink roses, peonies, lemon blossom and thistles, secured with a York Rose," according to the Royal Collection Trust's shop. In addition to the fun souvenirs, Princess Beatrice's hand-me-down wedding gown is now on display at Windsor Castle along with her recycled Valentino shoes and a replica of her bridal bouquet. The daughter of Prince Andrew and Sarah Ferguson wore a floral dress and face mask to see the exhibit on Wednesday ahead of its official opening. Beatrice, 32, made a last-minute request to the Queen, 94, to borrow her 1960s-era dress by Norman Hartnell — the same designer who crafted Elizabeth's own WWII-era wedding gown — for the big day. The Queen first wore the taffeta gown for a State dinner at the British Embassy in Rome during a State Visit in 1961. Her Majesty wore it again to the London premiere of the film Lawrence of Arabia in 1962 and for the State Opening of Parliament in 1966. Much of Princess Beatrice and Edoardo's low-key royal wedding (nuptials were scaled back amid the coronavirus pandemic) has remained a secret, but a few details from their big day have been revealed, including the romantic poem that was read during the ceremony.

The short service featured both personal touches and current pandemic health practices: In accordance with government guidelines, no hymns were sung, but the bride’s and groom’s mothers (the Duchess of York Sarah "Fergie" Ferguson and Nikki Williams-Ellis) read two of the couple’s favorite poems, Sonnet 116 by William Shakespeare and “I Carry Your Heart with Me” by American poet E.E. Cummings.

The poem begins, "I carry your heart with me (I carry it in my heart), I am never without it (anywhere I go you go, my dear; and whatever is done by only me is your doing, my darling)."