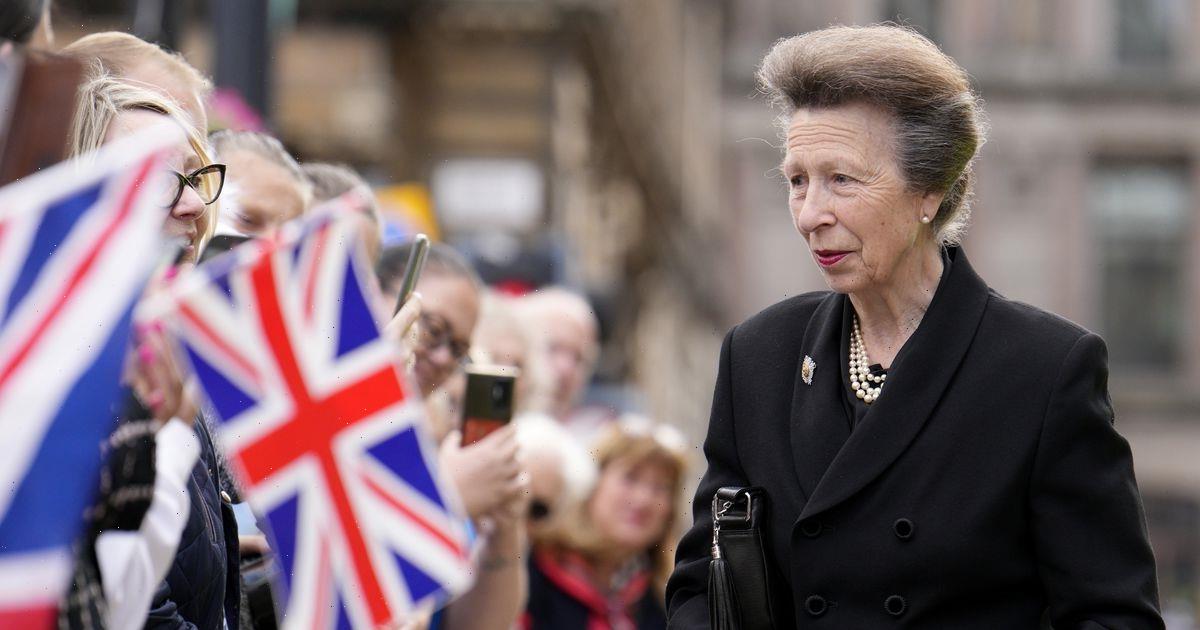 She is touring the Glasgow City Chambers, one of the city's most celebrated works of architecture, and meet with representatives of organisations of which the late Queen was a patron.

Anne was accompanied by her husband Sir Tim Laurence, was pictured chatting to crowds outside before reading messages left on bouquets.

This comes after Anne, 72, has taken a front-and-centre position during the preparations for her mother's funeral, appearing alongside her brothers and nephews during the coffin's procession from Buckingham Palace to Westminster Hall yesterday.

The late Queen's only daughter has made history in the last few days, becoming the first woman to 'stand guard' for the Vigil of the Princes.

Speaking about her late mother in a statement, the Princess said: "It has been an honour and a privilege to accompany her on her final journeys."

She continued: "I was fortunate to share the last 24 hours of my dearest Mother’s life. It has been an honour and a privilege to accompany her on her final journeys.

"Witnessing the love and respect shown by so many on these journeys has been both humbling and uplifting.

"We will all share unique memories. I offer my thanks to each and every one who share our sense of loss.

"We may have been reminded how much of her presence and contribution to our national identity we took for granted."

Referring to the new monarch, she added: "I am also so grateful for the support and understanding offered to my dear brother Charles as he accepts the added responsibilities of The Monarch.

"To my mother, The Queen, thank you."

The Princess Royal has paid a sweet tribute to her late mother with her choice of accessories in recent days.

She has been seen, on numerous occasions, sporting her favourite Grima pearl earrings presented to her as a gift from her parents in the 1960s.

Anne previously wore these at her father's funeral in 2021 and has chosen to sport them again in another sentimental tribute to her loving parents.

The staple piece has been a go-to for Princess Royal for more than 50 years but it's not just for sad occasions. Anne sported the stunning accessory to her very own wedding to Vice Admiral Sir Tim Laurence in 1992, and at age 19 while on her first tour in Australia with her mother, she wore them.