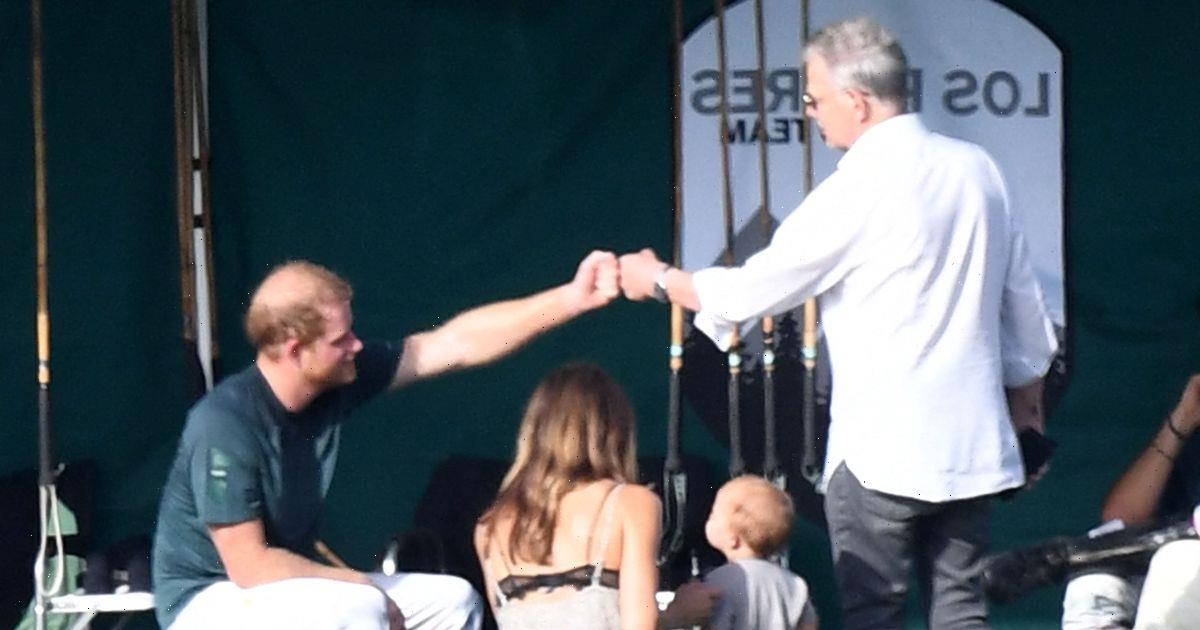 Prince Harry was spotted showing his bond with composer David Foster, the husband of Meghan Markle's school friend Katharine McPhee at his polo match, where he fell off his horse, at the weekend.

While the Duchess of Sussex, 40, and their children Archie, three, and Lilibet, one, opted to stay at home for the Santa Barbara Polo game, which took place near their home in California, the Duke of Sussex was supported by close friends instead.

According to reports, Harry, 37, has developed a "close relationship" with his "other father" David in the months since his own with dad Prince Charles broke down.

David, 72, was pictured supporting Harry as he got ready for the match, and the pair even fist pumped in a sweet moment.

American Idol runner-up Katharine and their little boy Rennie, one, were also by his side.

David is just a year younger than future king Charles, 73, and has been a "father figure" to Harry since he made the move to the US in 2020.

What's more, the composer helped the Sussexes find a home in Canada during their initial move across the pond.

The Duke and Duchess settled on Vancouver Island, British Columbia, before eventually deciding to make the permanent move to the states.

Sharing the details of David and Harry's special bond to Access Hollywood nearly two years ago, Katharine said: "My husband has a really, really beautiful relationship with Harry. "They're so cute. They're like father and son," the actress gushed.

Katharine also explained that her husband is very resourceful and "loves to help people", which was the main reason he assisted in finding the couple a home.

"We just hope they end up somewhere where they feel like they can really settle down," the actress added to the publication.

Katharine and Meghan used to star in school musicals together decades ago, and while they were never "close friends" at the time, the actress shared an adorable throwback of her and the Duchess as bright-eyed teenagers on her Instagram. In the snap, Katharine wore a stunning emerald green sequinned ball gown, while Meghan was dressed in a black satin frilled gown that featured white lace on the bust.

Both girls went for full-glam theatre makeup with bright red lipstick to match their smokey eyes.

"Meghan and I did musicals together as kids," Katharine captioned the post. "She grew up to be the Duchess of Sussex and I grew up to star on the West End, so same life if you ask me. #TBT."

Fans loved the connection, as fellow stars in the industry also shared their thoughts in the comments.

"This is the best!!!" one person exclaimed, as another joked: "Meghan slid into my DMs back in the day so I'm basically Mr Markle."

For all the latest Royal stories, sign up for OK!'s daily newsletter here.