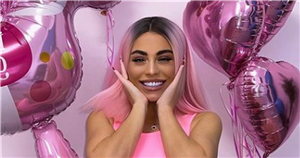 The 26 year old former glamour model, who made history on the ITV2 dating series for being part of the show's first ever same-sex couple alongside fellow contestant, the late Sophie Gradon, announced yesterday that she and fiancé Harry are due to welcome a baby girl later this year.

In an Instagram Q&E with her 261,000 followers this morning however, Katie – who shares her time between living in both the UK and Thailand – announced that she would be continue to upload content to OnlyFans during and after her pregnancy.

After being asked, "Will you stop doing OnlyShe and stuff now you have a baby?", the Liverpool-born reality star replied: "For now, I still love doing exclusive content for me fans. Having a baby isn't stopping anything that I do."

She added: "I have more goals and purposes than ever. I have some exciting things launching though however, and that will take main focus in my business."

Katie and fiancé Harry – to whom she got engaged to on Christmas day last year – have been creating racy content together on X-rated subscription site since they became an item.

The app launched in 2016, was once used predominantly by sex workers, but now a number of famous faces can be seen uploading content, typically charging fans a monthly subscription fee to see their latest photos and videos.

Showing off her blossoming baby bump yesterday in a neon pink swimsuit beside a pair of oversized teddy bears and pink unicorn balloons, Katie revealed that she was expecting a daughter.

She captioned the photo: "Baby girl! Mummy and daddy are patiently waiting to meet you. Just a few more weeks."

She first took to Instagram to announce the pregnancy back in January, also revealing that she was already six months pregnant. Sharing a montage of images and videos of her pregnancy journey at the time, the reality star wrote: "First came love, then came you!

"6 months pregnant with our biggest blessing. I’ve kept this between close friends and family for a while but my beautiful baby bump is getting hard to hide. We love you so much already baby and cannot wait to meet you."

The Love Island star also revealed that she and Harry already have a name for their little girl, telling fans yesterday: "She's had one for a long time. We all refer to her by name now. Close family anyway."

For the latest Love Island news, sign up to our daily OK! newsletter.