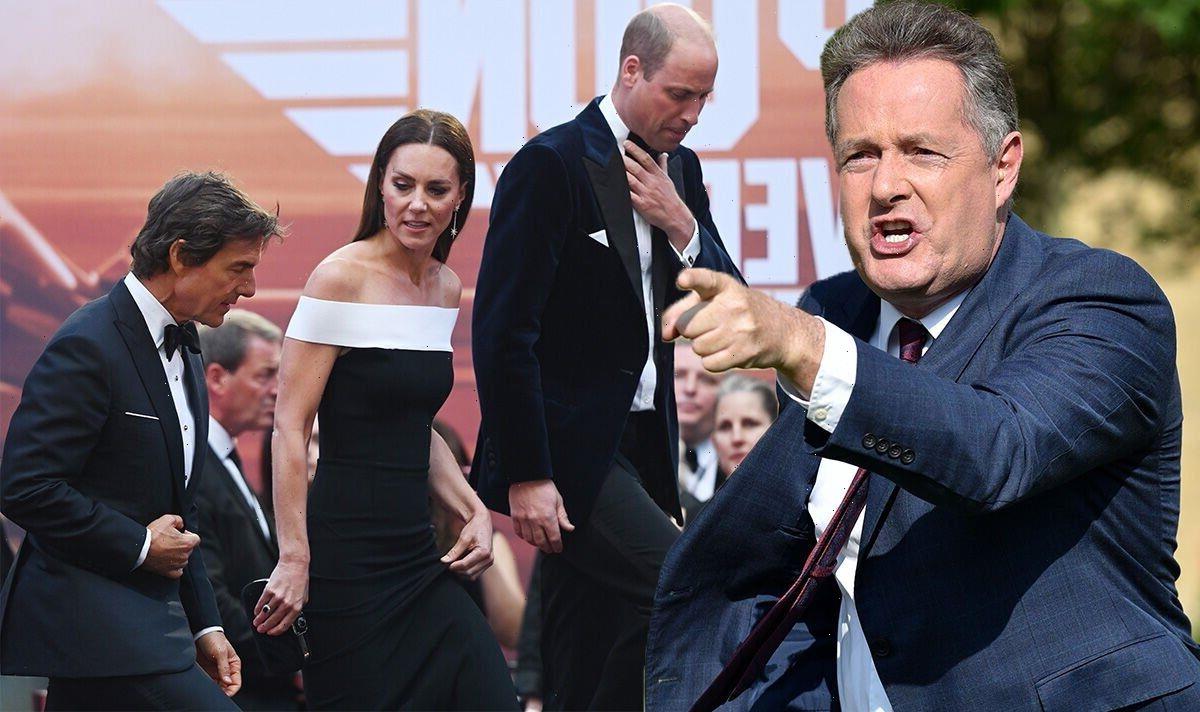 Piers Morgan poked fun at Tom Cruise on Twitter yesterday after he attended the Top Gun: Maverick premiere in London’s Leicester Square yesterday. The actor met the Duke and Duchess of Cambridge at the event, where they could be seen catching up on the red carpet.

Piers, 57, reacted to a post from fellow journalist Roya Nikkhah, who shared a video of the moment.

The clip showed Kate Middleton, 40, looking tall and elegant as she came to greet Tom, 59, and shook the actor’s hand.

Roya captioned the video: “The Duke and Duchess of Cambridge have arrived at the

@TopGunMovie premiere in Leicester Square, with Tom Cruise welcoming them on the red carpet.

“Kate is in @RolandMouret #TopGunMaverick,” the journalist added in reference to the royal’s outfit.

Piers then retweeted the video in view of his 7.9 million followers with a cheeky jibe at Tom.

This is not the first time someone has made fun of Tom for his height, with the actor previously admitting in a 2011 interview that he was “very sensitive” about the subject.

Roya posted a number of other videos to Twitter further showing Tom’s interactions with the royals.

One clip showed Kate and husband Prince William standing beside Tom as they smiled in front of a huge replica aeroplane prop for the premiere.

Another video saw Tom graciously lend the Duchess an arm as he helped her climb the stairs of the red carpet.

Piers’ followers took to the comments section to share their thoughts on the TalkTV host’s dig at the action star.

Verity Kalcev commented: “Is that news? She’s probably wearing heels. So what. Heightist.”

“Perspective and heels. Aren’t you there?” asked Moira Bates.

“And he’s taller than you if he stands on his wallet,” quipped Aetos.

“It looks like Kate isn’t wearing her usual high heels tonight as William looks much taller than her,” Kathryn suggested.

“It does look like Tom has got his heels on to try and balance out the height difference.

“I don’t know why it bothers him, he’s an excellent actor and clearly beloved by his fans,” she added kindly.

Tom’s latest Top Gun film premiered in London’s Leicester Square on Wednesday as a follow up to the hit 1980s film, with the actor reprising his role as Pete “Maverick” Mitchell.

Tuesday marked the movie’s first premiere at the Cannes Film Festival, where Tom and his co-star Jennifer Connelly, who plays Penny Benjamin, walked the red carpet.