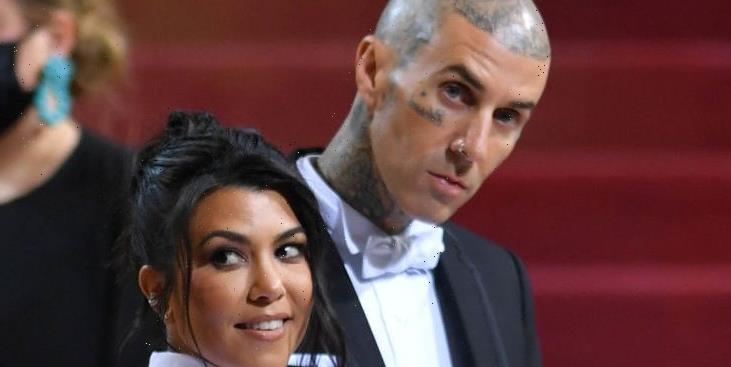 As you will know by now, Kourtney Kardashian and Travis Barker recently held their third (and I guess final?) wedding bash over the weekend in Portofino, Italy. With the stunning coastal scenery, opulent decor and clear blue skies, they really are living our Italian wedding dreams right now. But, it seems the extravagant Italian food banquet may not have been quite what you’d expect from Kravis… after a picture of the wedding food appeared online, prompting fans to all ask the same question.

Details about the event have been appearing on social media gradually over the last few days, and it’s in the Instagram Stories that we’re really getting the insight. With the ocean backdrop of Portofino, Kylie Jenner gave us a little BTS look at the magical wedding set up. It was everything you would expect from the loved-up pair, except for one thing…

She uploaded a video to her Insta Story showing a lovely little (emphasis on the little) traditional pasta bar that was fitting for their theme. But it wasn’t quite the piled plate of spaghetti you were hoping for. Fans were genuinely gobsmacked when they saw the video revealing the tiny pasta portions that were being served up to guests. There are small portions, then there are SMALL portions. Sorry Kravis, but this was the latter. People had a few things to say about it, too.

the pasta portion size at kourtney kardashian’s wedding is the one of the saddest things i’ve ever seen pic.twitter.com/Xq4XUMe5mq

One Twitter user said “The pasta portion size at Kourtney’s wedding is one of the saddest things I’ve ever seen.” Others were quick to agree, commenting “that’s a mouthful, not a portion,” “I’ve never seen someone do shots of pasta before 🤣” and “chippy on the way home.”

Chippy on the way home

I’ve never seen someone do shots of pasta before 🤣

the pasta portion sizes at Kourtney Kardashian’s wedding yesterday. personally if a portion isn’t the size of my face I’m not interested pic.twitter.com/Hgeu9CdNqr

The tomatoey spaghetti goodness was fresh and piping hot when twisted onto patterned plates, and did look tasty but if this was the ‘main course’ we imagine there may have been a few growling stomachs. In defence of the meal, Kylie’s stories also showed there was a cannoli bar, and of course, traditional Italian meals often involve multiple courses, but at the minute… this is all we can see.

Twitter users continued to comment on the pasta dish and what they think a real portion of spaghetti looks like. One said “Personally, if a portion isn’t the size of my face I’m not interested. Someone else added “The correct adult portion size is what’s in the pan,” while another said “Had better be a 30 course meal.”

That’s a mouthful, not a portion.

the correct adult portion size is what’s in the pan

had better be a 30 course meal