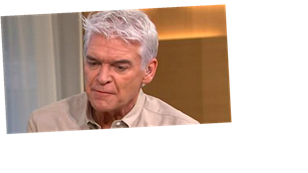 Phillip Schofield received an outpouring of support when he came out as gay earlier this year.

But, one of his former girlfriends, Markia Tautz, has said him coming out earlier in his career could have “jeopardised it all”.

The 58 year old This Morning star’s ex has opened up about their romance in the 1980s, when the pair dated after meeting in New Zealand.

Marika explained: “We were an item for a couple of years.

“We got on really well. He was a funny guy, kind, sensitive. He wrote me the most beautiful love letters.

“His only vice was smoking, but he was a considerate smoker and would go outside or wind down the windows in the car.”

She added to Mail Online: “He went from being an ordinary bloke to a celebrity. When we went out to dinner, people would ask for his autograph.

“He was very well groomed and maybe he came across as a bit gay. There was probably something underlying but when he was with me I never knew. We had a full physical relationship. He was a regular guy, I never suspected anything.”

A year on in their romance, Phillip, who has recently reportedly moved into a bachelor pad, presented Marika, a TV floor manager at TVNZ, with a promise ring on her 21st birthday celebrations.

She said: “All my family and friends were there at a big party.

“Phil gave me this big box wrapped up. There was nothing in it except at the bottom a tiny box, and inside that was a promise ring — the promise to get engaged.”

Phillip went on to meet and marry wife Stephanie Lowe, but he reportedly plans to divorce her after coming out as gay 27 years after saying ‘I do’.

TV star Phillip’s former lover, who now works as a nurse in America, has since said that as he was working on a pop music show for teens it could have been “impossible” for him to come out.

She added: “If he had, it could have jeopardised it all.”

Earlier this year, Phillip released an emotional statement to reveal he was gay.

It read: “You never know what’s going on in someone’s seemingly perfect life, what issues they are struggling with, or the state of their wellbeing – and so you won’t know what has been consuming me for the last few years. With the strength and support of my wife and my daughters, I have been have been coming to terms with the fact that I am gay.

“This is something that has caused many heart-breaking conversations at home. I have been married to Steph for nearly 27 years, and we have two beautiful grown-up daughters, Molly and Ruby. My family have held me so close; they have tried to cheer me up, to smother me with kindness and love, despite their own confusion. Yet still I can’t sleep and there have been some very dark moments.

“My inner conflict contrasts with an outside world that has changed so very much for the better. Today, quite rightly, being gay is a reason to celebrate and be proud. Yes, I am feeling pain and confusion, but that comes only from the hurt that I am causing to my family.

“Steph has been incredible – I love her so very much. She is the kindest soul I have ever met. My girls have been astonishing in their love, hugs and encouraging words of comfort. Both mine and Steph’s entire families have stunned me with their love, instant acceptance and support. Of course they are worried about Steph, but I know they will scoop us both up. My friends are the best, especially Holly, who has been so kind and wise – and who has hugged me as I sobbed on her shoulder. At ITV, I couldn’t hope to work with more wonderful, supportive teams.

“Every day on This Morning, I sit in awe of those we meet who have been brave and open in confronting their truth – so now it’s my turn to share mine. This will probably all come as something of a surprise and I understand, but only by facing this, by being honest, can I hope to find peace in my mind and a way forward.

“Please be kind, especially to my family. Phillip.”