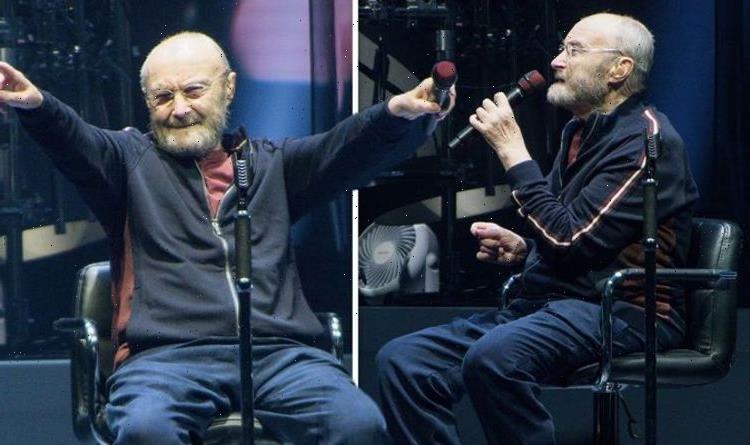 Phil Collins admits he can 'barely hold a drumstick'

Phil Collins, 70, looked frail as he took to the stage with his band Genesis at the UBS Arena in New York last night. Alongside his bandmates Mike Rutherford and Tony Banks the musician performed seated after battling a number of health issues over recent years.

Genesis performed some of their most iconic songs, including I Can’t Dance, Follow You Follow Me, the Mama and more.

Confined to a chair, Phil was able to hold a microphone and a tambourine during parts of the two-hour show.

However, he has had to relinquish his beloved drums and piano due to his declining health.

Phil dislocated a vertebra in his upper back when he was performing in 2009.

He then had surgery to correct the injury, which went wrong.

This left him with crippling nerve damage in his hands which has left him unable to play the instruments he is famous for.

For this reason, Phil’s 20-year-old son, Nic, has stepped in to play the drums throughout Genesis’ 47 tour dates across Europe and North America.

Despite his ailments, Phil’s voice appears to still be in fine form.

“Musically, he is sound, strong and often pleasantly surprising.”

Phil has admitted that this tour is likely to be his last.

He told Mojo: “This English and American tour, that will be enough for me.”

Mike Rutherford then chimed in saying: “We are a good age.

“I’ve loved it. But at the same time, you can’t get too lost in work.”

Phil has also been plagued with acute pancreatitis, which has been linked to high alcohol consumption which Phil admits he turned to after his split from wife Orianne Cevy in 2006.

He opened up about turning to drink to cope with his emotional turmoil in a 2016 press conference.

He said: “Within months you’re drinking vodka from the fridge in the morning and falling over in front of the kids.”

Phil is also a type two diabetic and had to receive treatment in a hyperbaric chamber after a diabetic abscess developed on his foot and became infected, reports MailOnline.

The North American leg of Genesis’ tour kicked off on November 15 and will run until December 16.

The band will return to Europe in the Spring and perform in Germany, France, The Netherlands and three dates at London’s O2 Arena.