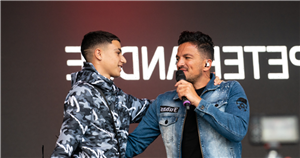 Peter Andre has revealed that his son Junior is 'becoming the same kid that he was' during his Mysterious Girl days after signing a huge record deal.

The 48 year old dad-of-four, who recently unveiled an exciting insight into 16 year old son Junior’s upcoming album, exclusively revealed to OK! that he reflects on the earlier days of his career, including hits such as Flava, with 'fondness'.

Peter, who is dad to son Junior and daughter Princess, 14, and shares Amelia, seven, and son Theodore, four, with wife Emily, 32, said: "It feels great looking back at the old pictures of the Mysterious Girl days. You know, I can't believe what was achieved from that one song.

"I love looking back at it in fondness and looking and seeing that my son Junior is becoming that same kid that I was when I was 20."

It comes after Junior announced that he had 'been secretly working' on the 'massive project' with Columbia Records UK, who represent the likes of Harry Styles, in partnership with Rebel Records, while Peter is also preparing to head back into the studio following his tour.

Meanwhile Peter, who is currently playing Teen Angel and Vince Fontaine while on tour with Grease, opened up about the 'pressure' of keeping in good shape during the early days.

The TV presenter has joined forces with Ben Smith, who also co-founded one of the most successful online nutrition plans in the UK to launch health app, #itsfine, in a bid to break away from fad diets in exchange for a more sustainable and healthy lifestyle.

Peter, who has flaunted his torso on calendars throughout his career in the public eye, described how he felt a 'huge pressure' to stay in shape after he shot to fame following the release of Mysterious Girl in 1996 and his stint on I'm A Celebrity…Get Me Out of Here in 2004.

Speaking about body image, Peter, who is keen to encourage people to have balanced lifestyle and to not feel guilty about indulging in a slice of cake, said: "Of course in the early days I felt a huge pressure but I put that pressure upon myself because, you know, I would train so many hours a day that no matter what I ate – I just could not put on any fat or weight.

"I was doing weights, dancing rehearsals, the whole thing. When it comes to my calendars I don't necessarily go on a diet. There is a big difference between staying trim and looking good and being ripped for a calendar – that is a different situation.

"When you are going to be ripped for a calendar you have got to up your protein a lot but to maintain looking trim in clothes and feeling great is what I have been doing for most of my life which is basically having a balance of all the foods that I love.

"Only when it comes to calendar time or things like that I sort of top up my protein a lot more and less of the other stuff but only for a specific look I want."

Peter, who is an advocate of eating in moderation and intermittent fasting, added: "I’ve been using this approach for years but I just hadn’t found anything to help me with it."

"Experiencing the pressure put on people in the entertainment industry to lose weight caused me to see a wider problem in society. In searching for my own solution, I found Ben and the #itsfinelifestyle and joined the business with the goal of rescuing people from fad diets.”

Asked about mealtimes in the Andre household, Peter, who lives in a gorgeous Surrey mansion, said: "The kids have a very balanced diet I do breakfast, lunch and dinner for them but when I am on the road my diet is slightly different.

"I have always believed in intermittent fasting without realising I was doing it so I skip breakfast, I always have, and it just means I have a certain amount of time to eat the foods that I want to eat in."