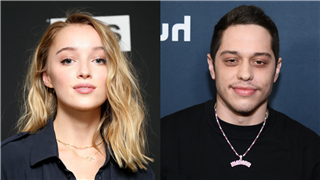 Pete Davidson and Phoebe Dynevor are spending time together across the pond. On Sunday, the rumored couple was spotted near Stoke-on-Trent, an English city just south of Manchester, in photos obtained by The Daily Mail.

The pair was seen visiting a grocery store, before taking a stroll together. While on their walk, during which they were seen laughing and joking around, Davidson and Dynevor had their arms wrapped around each other.

Davidson wore blue pants, a beige pullover, and a baseball cap for his outing. The Bridgerton  actress, meanwhile, wore gray sweats and a denim jacket, finishing off her look with a baseball cap and sunglasses.

Davidson, 27, and Dynevor, 26, first sparked romance rumors in March when an eyewitness told ET that the pair was allegedly holding hands while in the United Kingdom together.

That same month, a source told ET that the Saturday Night Live star and Dynevor “really hit it off” after meeting at a New York City gathering.

“They started off as friends and quickly realized there was chemistry between [them],” the source said. “Pete and Phoebe started out casually dating but things have gotten a bit more serious recently.”

The source added that Davidson and Dynevor “have traveled between New York City and England to spend time with one another while also working.”

During a virtual Q&A with Marquette University students in April, Davidson also revealed that he’s “with my celebrity crush.” Around the same time, fans pointed out that Davidson and Dynevor wore seemingly identical monogrammed necklaces during separate interviews.