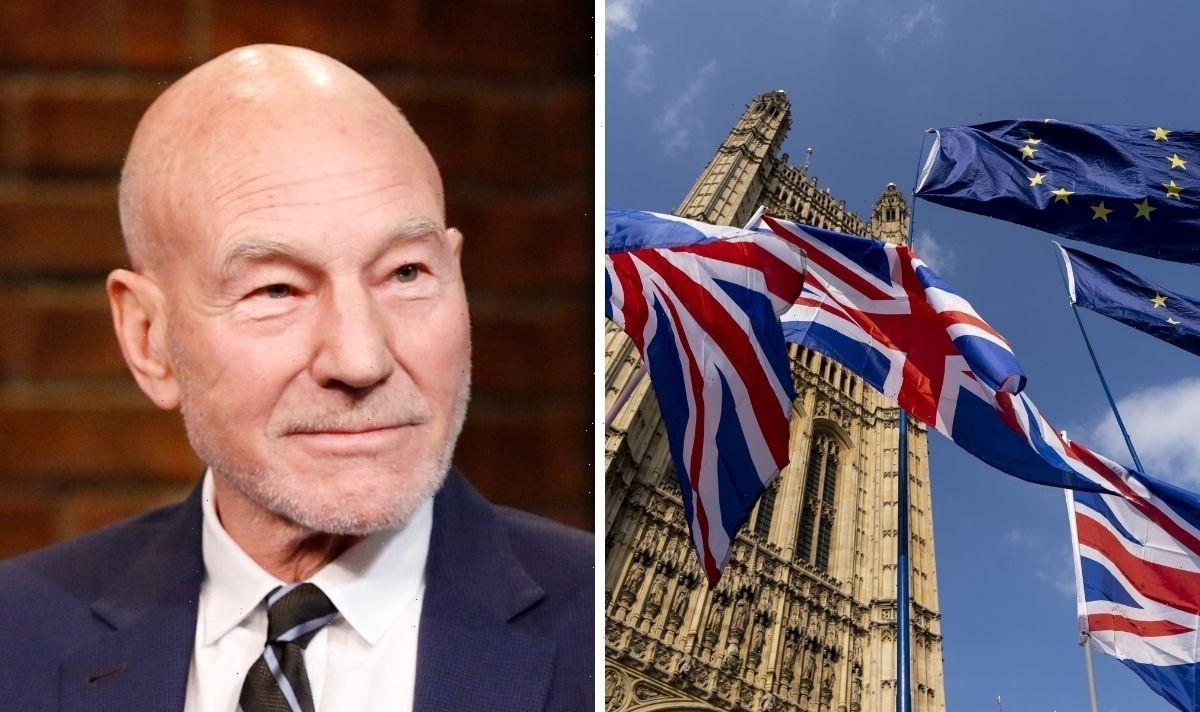 Sir Patrick Stewart apologises to Europe for Brexit in 2017

Tonight, Sir Patrick’s iconic role as Captain Jean-Luc Picard is once again on show when Star Trek Generations airs tonight on Film4 from 6:45pm. The film follows Picard as he travels into a time vortex to seek the assistance of his predecessor, James T Kirk, played by Hollywood legend William Shatner, after an alien threatens to demolish a star system. Sir Patrick’s performances as Picard have earned him glowing reviews from TV and film fans from across the globe, and even spawned a new Amazon Prime series named after his protagonist.

But despite the goodwill the actor has received, Sir Patrick, 81, was once incensed at the UK’s historic decision to take back control in 2016.

Four years after Brexit was voted for by the public, Sir Patrick voiced his frustrations at the vote, describing it as the “grimmest thing” to have happened to him in his political experience.

Speaking to PA Media, Sir Patrick described the vote as something that “makes me very, very sad”.

He continued: “I think what is happening with the European Union is actually the saddest, grimmest thing that has happened to me since I have been involved in politics.”

His confession wasn’t the first time that Sir Patrick would air his grievances with the political system, not only in the UK but in the US.

In an interview with Esquire in 2020, the Yorkshire-born legend described the ongoing presidency of then-US leader Donald Trump as “very disturbing”.

He compared it to the UK’s situation with Prime Minister Boris Johnson, who he noted he’d previously “always enjoyed when he was Mayor London because he was witty”, yet wasn’t someone who “should be in Downing Street”.

“And then there is Brexit. Our leaving the EU was one of the saddest days of my life.”

The star detailed how when carrying out Picard duties in Berlin, in particular a Q&A with an audience, Sir Patrick was asked something about Brexit.

During his “little speech”, Sir Patrick explained how saddened he felt at the UK/EU break-up, adding that the word union was “one of the most important words that could ever be attached to politics”.

He concluded: “The audience rose to their feet and applauded, and I’ve never had that happen before, it almost brought me to tears.

“It was very humbling and heartwarming.”

Sir Patrick has previously discussed his own political beliefs, with “fairness” and “equality” at his core.

The Labour Party, the star told the Independent in 2003, was the organisation he supported in the UK, considering himself a socialist.

He said: “My father was a very strong trade unionist and those fundamental issues of Labour were ingrained into me.”

Sir Patrick added: “What the hell are people going to do if they don’t support Labour? Who else is there?

“I stand by the party absolutely. It doesn’t mean you’re an enthusiast for every action that the Prime Minister, the Cabinet or the party takes.

“But, fundamentally, it stands for what I believe is the most just kind of society we can have here.

“I lived under those 18 years of Conservatism, under that monster [Margaret] Thatcher.”

While he remained a key Labour supporter, Sir Patrick once had to deny he had left the party after concerns he held over former leader Jeremy Corbyn.