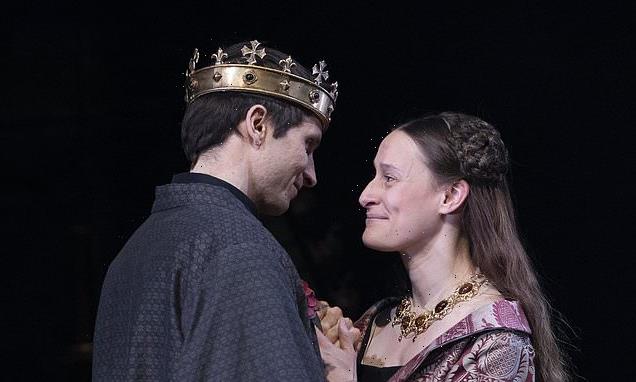 Let it not be denied that the second lot of three hours, in this two-part, Royal Shakespeare Company history marathon, proveth somewhat testing.

It’s an epic cycle charting the life of the medieval King Henry VI. Getting through it in a single day might have defeated even the Bard. But not me; and, more importantly, not the terrific cast in Owen Horsley’s seismic production.

Originally written in three parts, the plays are some of old Bill’s earliest works and are often avoided by producers — not for want of quality but for the sheer excess of quantity. 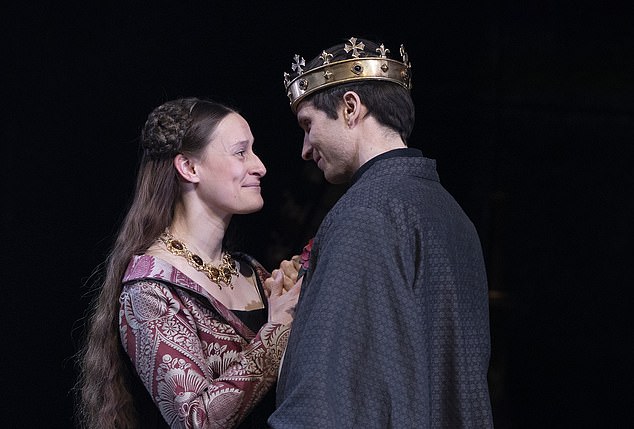 Let it not be denied that the second lot of three hours, in this two-part, Royal Shakespeare Company history marathon, proveth somewhat testing. It’s an epic cycle charting the life of the medieval King Henry VI. Getting through it in a single day might have defeated even the Bard. Minnie Gale as Margaret with Mark Quartley as Henry VI

They record a tumultuous period of history in the bitter aftermath of Henry V. He may have conquered the French at Agincourt, but he bequeathed an empty exchequer and left a warring nobility, divided over rival claims to the throne by the houses of York and Lancaster.

Best seat in the house

If you’re hungry for more history, Game Of Thrones star Kit Harington runs out in UK cinemas for the next three weeks as Shakespeare’s medieval warrior King Henry V, in a live recording of the Donmar Warehouse’s recent modern dress production.

Into this cauldron, Shakespeare threw one of his finest, wildest characters — Henry’s French Queen, Margaret. Played here by Minnie Gale, she is a highly sexed strategist whose hobby of tapestry weaving serves as both a sham of submission and a metaphor for her scheming.

Most excitingly, Gale has an eager appetite for the raw meat of Shakespeare’s characterisation; moving through the gears from volatile, to scornful, shrewd, decisive and, in due course, panic-stricken.

Mark Quartley, as her timid husband, could not be more different, but is no less fascinating. Fretful, credulous and holy, he is forever on the brink of tears, or clutching his chest as if experiencing palpitations.

But he turns out to be the melancholy conscience of a play where all around him are dogs of war, hunting his — and each other’s — scalps. (Be warned: there is a fair bit of gore in the shows; and a lot of very realistic heads on pikes.)

The saga teems with plenty of menacing characters, too; including the scowling Oliver Alvin-Wilson as Henry’s main rival, York.

He holds himself in extremely high esteem and rules his band of macho, chest-beating sons like a dead-eyed mafia boss.

Among the brothers, Arthur Hughes, as Henry’s eventual nemesis Richard, is deliciously sardonic — and gives a promising audition for his turn as Shakespeare’s villain-in-chief, Richard III (which will open in Stratford this June).

Despite the chaotic bear-pit of characters, Horsley’s production (co-directed with RSC boss Greg Doran), brings clarity to the plays’ multitudinous strands, while relishing the rich language and baroque theatricality.

Horsley proves himself to be one of the best directors of Shakespeare to have emerged at the Royal Shakespeare Company in recent years. And his staging serves as a reminder of just how engrossing the Bard’s dialogue can be, when spoken directly, with pleasure and excitement.

Stephen Brimson Lewis’s spartan set of bare boards and projections of stormy seas and majestic skies allows Horsley to focus on the characters, while he marshals never-ending tides of vigorously choreographed battle scenes — although it’s these rounds of slaughter that eventually prove exhausting.

My only other quibbles are that Horsley’s weakness for projecting poorly lip-synched scenes filmed backstage sometimes gets in the way of our relationship with the actors on stage before us.

And maybe he could have edited the plays down to a more merciful two lots of two hours.

But this is still a theatrical triumph, in a bloody, unruly field.

No offence to taxidermists — or their daughters — but author Kate Mosse has contrived to turn her pot-boiling Edwardian melodrama of a novel into a lifeless, stuffed bird of a play.

Mosse is the author of the 2005 bestseller The Labyrinth, about a quest for the Holy Grail. This lesser work, from 2014, is set in and around the Chichester of 1912; and is about a young woman called Connie, who is haunted by memories of a strange lady from her childhood.

The individual in question had been living in an asylum, before escaping and mutating into an avenging serial killer of local men. In a densely opaque plot, the titular taxidermist appears to top her hit list. 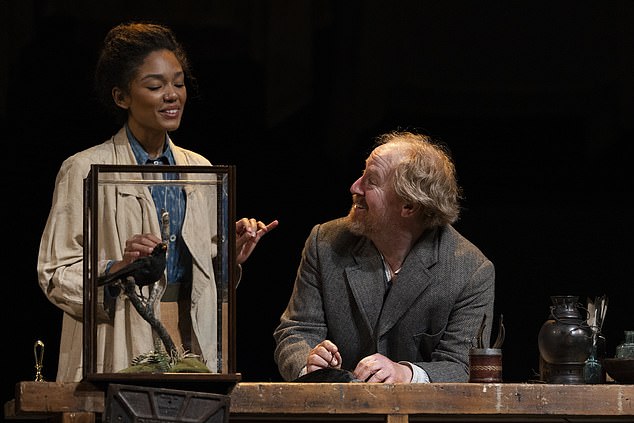 No offence to taxidermists — or their daughters — but author Kate Mosse has contrived to turn her pot-boiling Edwardian melodrama of a novel into a lifeless, stuffed bird of a play. Daisy Prosper with Forbes Masson as her father

Mosse’s story mobilises a good many clichés — chief among them a cabal of powerful white men who have committed a heinous crime and now hide their guilt behind a Masonic omerta.

The play’s real problem, though, is that Daisy Prosper’s Connie lacks dramatic purpose and has been encumbered with portentous dialogue so wooden you could use it to make furniture.

Only feisty Forbes Masson, as her louche father, seems determined to wring some life from the rigid script.

Otherwise, we’re meant to be perturbed by the witchy antics of Pearl Chanda, as Cassie, the avenging serial killer nursing a mysterious grudge . . . rooted in something occult.

She does at least get to savour a deliciously gruesome murder, which she commits after the interval. But there is no such fun for the rest of us in Roisin McBrinn’s murky production, fitted with cloudy taxidermy display cabinets onto which scenes of West Sussex marshland in the rain are projected.

Eerie groans, tolling bells, beating drums and echoing children’s laughter strain to generate atmosphere, but are no substitute for dramatic suspense. Without that, this is simply an avian stiff with little hope of ever taking flight.