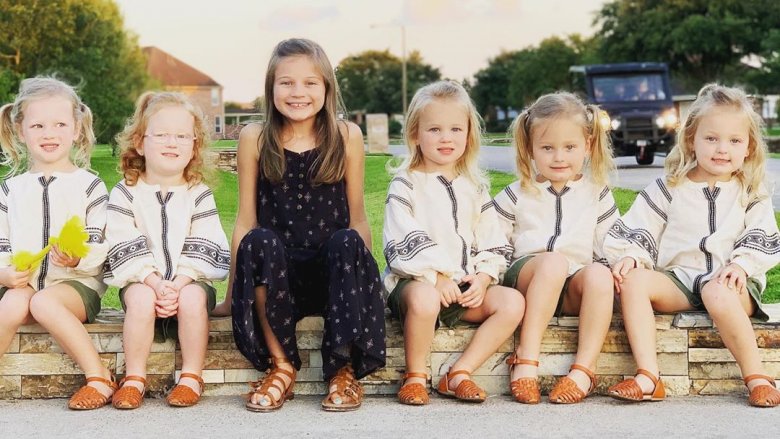 OutDaughtered stars Danielle and Adam Busby are envisioning the brightest future possible for their children. Proud mama bear Danielle recently gushed to In Touch about what her daughters — 8-year-old Blayke, and 4-year-old quints Ava, Olivia, Parker, Hazel, and Riley — might be when they’re older.

“The girls really enjoy STEM (Science, Technology, Engineering, and Math) learning and activities which is why we have them in a STEM-focused program at school and why we love Learning Resources toys so much in our home,” explained Busby (the TLC stars partnered with the educational toy company).

Eldest daughter Blayke is the most curious of their six kids, according to Danielle. “She just loves to learn and know everything about everything,” explained the OutDaughtered star, saying that Blayke is hoping to be a “veterinarian or a teacher.” As for Blayke’s younger sisters, Hazel is “for sure our little engineer, but with a free spirit,” Busby said, noting that Hazel reminds her of herself as a child “with the joy of problem solving and building things, she is very hands on.”

Elsewhere Parker is the one who questions things most often. “She loves to know how things work and why they do what they do, and she is a perfectionist,” Busby revealed. Ava and Olivia, meanwhile, are similarly focused. “They love things a certain way, love to coordinate objects, colors, numbers, but both so full of goofiness,” their proud mother explained.

Last but not least, Riley. No surprise here — Danielle calls her “the leader of the pack when it comes to the brains in the whole family,” and admits the 4-year-old is already smarter than she is. The OutDaughtered star even suggested hopefully, “She is going to be president one day!”

Adam and Danielle have been the focus of some online parent-shaming in recent weeks, after announcing that one of the quints would be skipping a grade ahead of her sisters. Riley, who scored so high on her preschool testing, went straight to kindergarten, while her sisters went to pre-K at the beginning of the new school year.

The Busbys are taking it all in stride, defending their decision as the right one for their family. “Knowing where [Riley’s] at right now, this was our decision based on her. Of course we looked at the family and how this change affects everyone else,” Danielle told People.

We have no doubt that all six Busby kids will be wildly successful in whatever vocation they choose, with plenty of support from Adam and Danielle along the way.