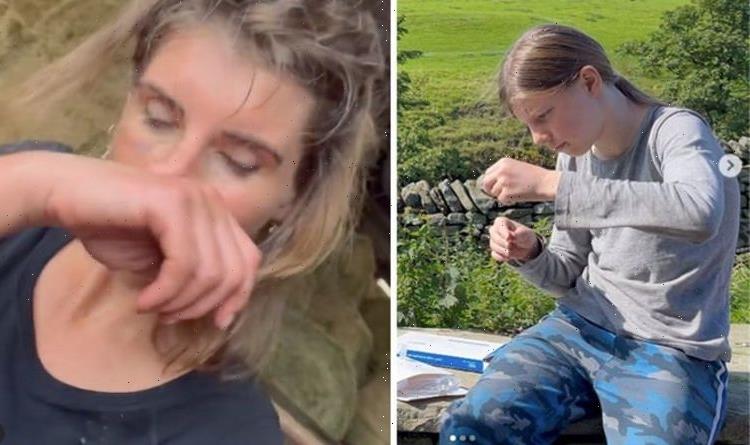 Our Yorkshire Farm’s Amanda Owen took to social media yesterday to reveal that her family had been “laid low” with illness. And today the mum-of-nine admitted that they are feeling “fed up and fractious”.

The shepherdess posted a series of pictures online which showed her youngest children eating their dinner together outside.

A third image captured one of her daughters taking a Covid lateral flow test.

“These have been ‘testing’ times to say the least!” Amanda wrote alongside the snaps, which she posted on Instagram.

“But we are not making a meal of it as we are all fine (albeit a bit fed up fractious). #yorkshire #covid19 #recovery #outdoors #test,” she continued, in view of her 392,000 followers.

Amanda was inundated with messages online as fans wished the family a speedy recovery.

“Aww bless you all Hope you are all feeling better now, must have been an ordeal with so many of you poorly,” one social media user wrote.

“A true Yorkshire woman getting on with whatever is thrown at you! Great to see you last week while walking by Ravenseat (my happy place), take care all of you and will get up there for a cream tea one day,” another added.

“Not the best way to spend the summer holidays! Good to hear you’re all fine,” a third remarked.

“So pleased to see you posting again hope you are all well,” a fourth chipped in.

The update comes after Amanda took a short absence from social media to look after her family.

Before last night’s offering, the Channel 5 star had not posted on the picture-sharing site since August 22.

Yesterday she spoke publicly about the family’s Covid battle for the first time.

Amanda shared a video which showed one of her children skipping down a pathway before running towards the camera.

“We’re fine but a few of us have been laid low with a dose of the [virus emoji],” she wrote beside her video.

Signing off with the hashtags: “#ill #recovery #covid_19.”

Earlier this month, Amanda announced that she is releasing a new book that is currently available to pre-order.

The 46-year-old’s release, which will be available on October 28, is titled, Celebrating the Seasons with the Yorkshire Shepherdess.

The TV star has already penned several books that follow her life on the farm.

The family live on Ravenseat in Upper Swaledale with their numerous animals.