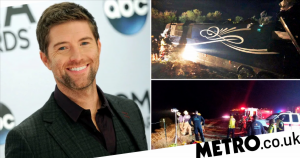 One person has been killed after country star Josh Turner’s bus crashed on Wednesday night.

According to reporters, seven passengers were injured after the bus carrying eight members of Turner’s road crew crashed off Highway 46 while leaving the Vina Robles Amphitheatre in Paso Robles, California.

The San Luis Obispo County Fire Department confirmed on Twitter that Josh, 41, and his band were not on the bus.

They wrote: ‘#CenterIC Confirmed Tour Bus of the Josh Turner Road Crew was involved in this accident. Mr. Josh Turner and band were in different buses and not injured. #CHP and #Firefighters will be at scene several hours for investigation and clean up.’

According to KSBY News, the California Highway Patrol explained that for unknown reasons, the driver of the bus ‘left the road’ and drove 200 yards until the bus crashed off a 50 foot cliff.

Two passengers were ejected from the vehicle, one of whom was killed.

The person who died in the crash was identified as David Turner, Josh’s sound engineer.

The 64-year-old, who is of no relation to Josh, is survived by his wife, Jamie, and daughter, Ada, as well as two grandsons.

Drugs and alcohol have been ruled out as causes of the crash, and the CHP is impounding the bus to investigate whether there were any mechanical issues.

It was also reported that it is being investigated whether the driver, who is believed to be in his 50s, had any medical issues which may have caused the crash.

A representative for Josh said in a statement: ‘Josh Turner and his road family have suffered a devastating loss. Please keep the crew, band and Josh in your thoughts and prayers!’

The musician has cancelled his concert tonight at the Central Washington State Fair in the wake of the tragedy.

Turner is best known for his songs Long Black Train, Time Is Love, Firecracker and All Over Me, and is a star on both the country and gospel scenes.