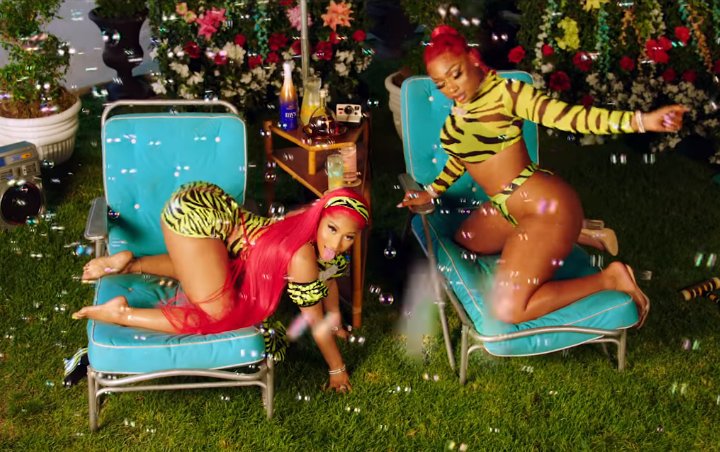 ‘Nicki trying to twerk on the chair has me dead,’ one Twitter user says after watching the video, while one other admits to wanting to ‘punch my phone looking at Nicki twerk.’

AceShowbiz -Despite having an enviable body, there is something that Nicki Minaj can’t do. The Young Money artist has recently been trolled on social media following the release of “Hot Girl Summer” music video, in which she appeared alongside her collaborator Megan Thee Stallion and Ty Dolla $ign.

People can’t help but laugh at a scene in the visuals where Megan and Nicki were lounging on pool beds as they started twerking. The “Big Ole Freak” rapper, unsurprisingly, did the dance flawlessly, though her fellow raptress appeared to be having a hard time doing the dance. This prompted people to clown Nicki for not being able to twerk despite having a great bod to do it.

Pointing out at how the chair was shaking so hard, an individual said, “Nicki trying to twerk on the chair has me dead. Instead of her a** to shake, it was the chair that was shaking.” Another comment similarly said, “Look how hard Nicki chair moving. Sis was really trying hard ! I wouldn’t even try to twerk a damn hair next to Meg.”

Someone even said that s/he “wanted to punch my phone looking at Nicki twerk. Her a** must got a boot on it. Like how your s**t don’t move.” One other, meanwhile, just couldn’t believe why Nicki did not know how to twerk when she has a big booty, calling it a true “mystery.” Some others pointed out her butt implants were the reason why she was struggling to twerk in the video.

Her bad twerk aside, Nicki definitely served looks in the music video. Posing seductively during a pool party, the “Megatron” rapper rocked a tiger-striped neon green dress before changing her ensemble into a pink bodysuit with major cut-outs that put her side and under boobs in full display.