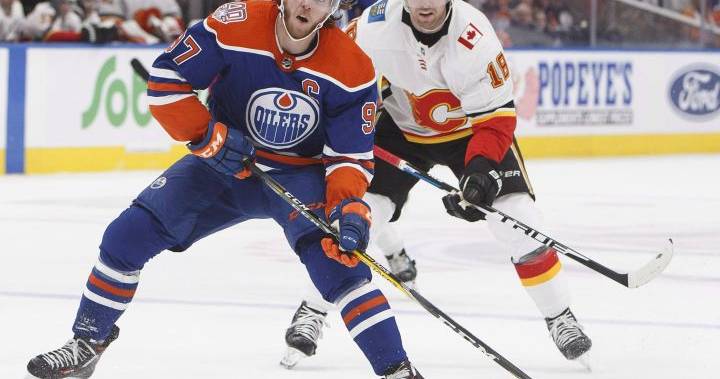 They’ve missed the National Hockey League playoffs the last two years and only made the post-season once since 2006 but new Edmonton Oilers forward James Neal says he believes he and his new teammates have a chance to present a clear and present danger to anyone who doesn’t believe in them.

“With the guys that we have, with (Connor) McDavid and Leon (Draisaitl) and so on, I think we’ve got a great young group,” the 31-year-old winger told 630 CHED’s Reid Wilkins this weekend. “When you have guys like that, you have a chance to win a Stanley Cup, so I think that’s our end goal.”

The native of Whitby, Ont., was traded from the Oilers’ Alberta rivals the Calgary Flames last week in exchange for veteran power forward Milan Lucic and a conditional draft pick. The move was largely seen by hockey commentators as a way for each player to get a fresh start and to find their game again after disappointing tenures with their respective Alberta teams.

Watch below: Some Global News videos about James Neal.

“[I’ve] just put it behind me,” Neal said of his disappointing year with the Flames.

There were big hopes the forward would live up to his reputation as a consistent goal-scorer when he signed a contract with Calgary last summer, but in 63 games, he was only able to score seven goals and 19 points.

“I think you learn from it, you get better,” Neal said. “It was a tough year.

“I went to Calgary with expectations and I wanted to do very well, but sometimes some things don’t work out and I think after two years of being in back-to-back Stanley Cup finals, it wears on you.”

Listen below: James Neal spoke to 630 CHED’s Reid Wilkins on Saturday about becoming an Edmonton Oiler.

While he has yet to play for a Stanley Cup champion, Neal made it to the NHL championship series with the Vegas Golden Knights in 2018 and with the Nashville Predators in 2017. The forward suggested that while the goal of a player is to go deep in the playoffs, having an earlier summer break this year may prove to be beneficial.

“[If you reach the final], you finish June 16 [or] 17 and you start training July 16 — it’s tough to get back in shape,” Neal said. “Obviously you don’t want to use that as an excuse, but I feel good this summer, and I’m looking forward to the opportunity.”

Prior to becoming an Oiler, Neal’s career has seen him spend time with the Dallas Stars, Pittsburgh Penguins, Predators, Golden Knights and Flames. With the Stars, who drafted him with the 33rd overall pick in 2005, he spent a season being coached by a man who will now be coaching him again in Alberta’s capital — Dave Tippett.

“[Tippett’s] a guy I know very well from Dallas when I just started in the league, so I know he’s going to bring a great element to our team,” Neal says of the Oilers’ 57-year-old bench boss who was hired by the team this off-season.

Watch below: Some Global News videos about Dave Tippett.

Tippett won’t be the only familiar face for Neal when he first sets foot in the Oilers’ locker-room at Rogers Place; his former Flames teammate, goaltender Mike Smith, also joined the club this summer when Oilers general manager Ken Holland signed him to a contract.

“Just his presence in the locker-room changes a lot of things… the Oilers are lucky to have him… [and] I’m really happy to be with him.”

Watch below: (From March 2018)A Calgary girl gets the thrill of a lifetime after sending a letter to Mike Smith.

Which line Neal will play on for the Oilers will be heavily debated in the coming weeks, but most hockey fans and pundits believe it’s almost certain he’ll share the ice with one or more of Ryan Nugent-Hopkins, Draisaitl or the team’s captain, McDavid, someone who is no stranger to him as they both train with former Flames star Gary Roberts in the off-season.

“Connor’s been there a long time so I get to see him a lot and this guy, he’s on another level,” Neal said.

Watch below: Some Global News videos about Connor McDavid.

Neal added that McDavid exemplifies the new NHL, in which young superstars are at the fore and that it’s up to players like him to adapt.

“I think you have to adapt every year,” he said. “[Look at] how skilled they [young NHL superstars] are, how fast they are — I think everything changes year to year and obviously you see that with Connor and Leon and how fast and high-paced they play.

“So you have to adapt but at the end of the day, I think you have to be ready to battle for each other.”

Despite a difficult 2018-19 season, Neal has been remarkably consistent as a scoring threat since coming into the NHL. In 766 career regular-season games, the winger has amassed 270 goals and 514 points while adding another 55 points in 104 career NHL playoff games. In 2011-12, he reached a career-high 40 goals with the Penguins. Neal says he hopes to return to form in Edmonton in 2019-20.

“To be able to have a good summer, get the body back to where it needs to be, train and regroup, and be ready to go, I think that’s going to do a lot for me,” he said, before joking about how he hopes he’ll become a bigger threat with the Oilers the next time they play the Flames.

“I haven’t scored a goal in the Battle of Alberta (yet), so hopefully I’m on the right side of it now,” he said. “It’s an exciting atmosphere — the Flames and the Oilers, they go back a long way.”