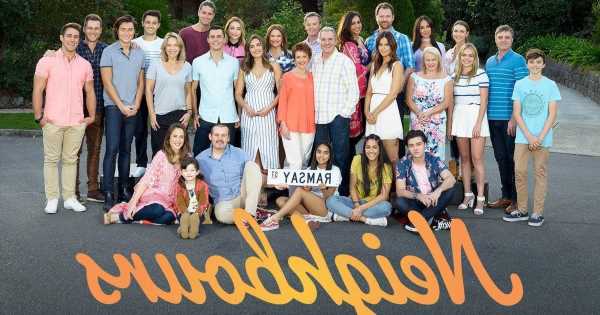 Although fans were heartbroken when Aussie soap Neighbours was axed earlier this month, it still celebrates its 37th birthday today. So what better way to commemorate the much loved show than with a look back at some of the show's maddest moments.

The soap has had some ridiculous storylines over the last four decades – here are some of the most memorable….

“Rack off, Bouncer!” is the obligatory phrase Brits use when doing an impression of an Aussie – and it’s all down to Ramsay Street’s original – and best – pet.

The labrador was so important to residents and viewers, he was given his own storyline – an iconic sequence in which he dreamed he was marrying Rosie, the border collie next door. The cast hated it, calling it a “strange” move, but even now the lovesick lab’s night-time fantasy remains one of the soap’s best ever moments.

Surely the most recognisable face in Erinsborough, Harold Bishop has gone down in legend as one of the greatest soap characters of all time. So his death in 1991 – when he fell off a cliff, leaving only his glasses behind – hit viewers hard. His wife Madge was also devastated by his demise, though she needn’t have worried. Five years later, Harold returned (suffering from amnesia, obvs), much to the surprise and delight of fans – and of course his beloved Madge. Proof you can’t keep a popular character down.

Neighbours loves a good ghost. We’ve counted at least nine over the years, with the likes of Madge and Drew Kirk making appearances from the afterlife. But the first Ramsay Street spirit was the most shocking. Popular student Todd Landers was killed on his way to stop girlfriend Phoebe Bright from having an abortion – but he wasn’t gone for long! He returned in the next episode as a vision in Phoebe’s mirror, to tell her she’d be OK. Even Bouncer felt his presence, so we can assume the apparition was real and not just a figment of Phoebe’s imagination

You have to feel sorry for Susan Kennedy. Not only did she have a hard time being married to that outrageous flirt of a dishy doc Karl, but she also suffered one of the most unfortunate injuries in soap history.The teacher was literally left crying over spilt milk when she slipped on an upturned bowl of cereal and suffered amnesia as a result. Thirty years were wiped in an instant and Susan spent the next few weeks believing she was 16 again!

Toadfish hasn’t had much luck when it comes to weddings, but his biggest OMG moment came just minutes after his marriage to the gorgeous Dee Bliss. Poor Toadie lost control of the car he was driving, sending it plummeting over a cliff and Dee to her death. Or so we thought. She reappeared 14 years later in 2017, wearing a wedding dress and, hot on the heels of an evil doppelgänger, scaring the bejesus out of Toadie.

Ahh, Neighbours! You shall be missed!

For the latest updates on your favourite soaps, sign up to OK!'s daily celebrity newsletter.