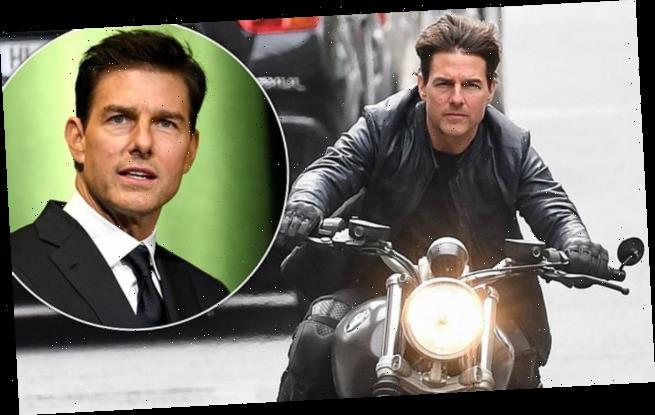 Filming at the £2m Mission: Impossible 7 set is thought to have been hit by more delays after a motorbike caught fire.

While doing a stunt on Tuesday the bike landed on pillows filled with cardboard and caught alight after the stuntman leaped from a ramp, reports The Sun.

Tom Cruise, 58, is believed to have been working with a parachute for a quarry ‘snow scene’ at the time of the blaze, which was attended by Oxfordshire Fire Service. 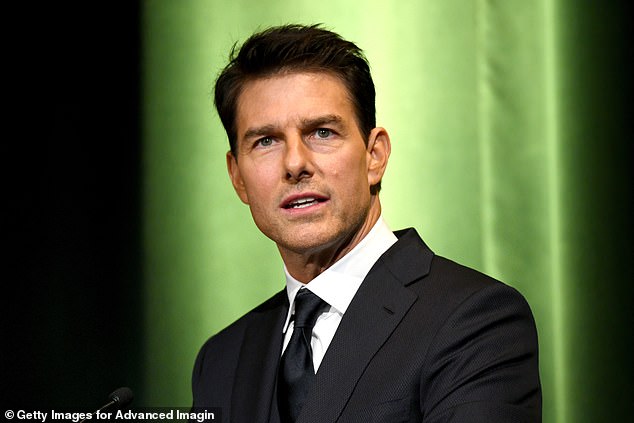 Delays: Filming for Tom Cruise’s Mission: Impossible 7 is thought to have been hit by more delays ‘after a motorbike caught fire and damaged the £2m set on Tuesday’ (pictured in 2019)

Photos obtained by the publication show the stuntman coming off the bike, before large clouds of black smoke fill the air.

A source told The Sun the stuntman was supposed to land on large pillows which had been filled with card to soften the impact while his bike would crash close by.

However despite ‘six weeks’ of planning, things didn’t go to plan and the motorbike hit the cushions sparking a fire.

They said: ‘This has been a massive challenge to stage and has cost a fortune, not to mention weeks and weeks of construction.

‘Unfortunately, it was miscalculated. The heat and the friction of the tyres meant that when the bike crashed, the cardboard padding sparked and went up in flames. 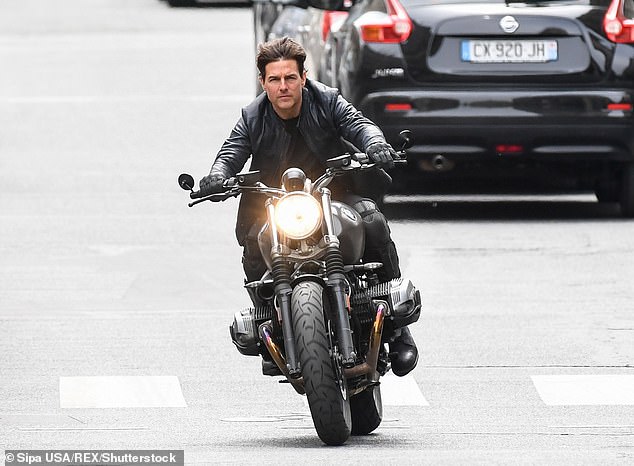 Stunts: A source said the stuntman was supposed to land on large pillows filled with card to soften the impact but his bike hit them as well, sparking the fire (Tom is pictured filming in Paris in 2017 for Mission:Impossible 6)

‘Fortunately, nobody was hurt but it’s a total catastrophe, not to mention extremely expensive for all concerned. Tom is very frustrated. Nobody wants more delays.’

MailOnline has contacted a representative for Tom Cruise and the Mission: Impossible film for a comment.

Filming for the seventh instalment of the franchise kicked off again last month after it had to pause because of coronavirus.

Tom, who famously likes to perform his own stunts but was not involved in Tuesday’s motorbike scene, recently threw himself out of a helicopter 10,000ft over the over the Oxfordshire countryside for another scene. 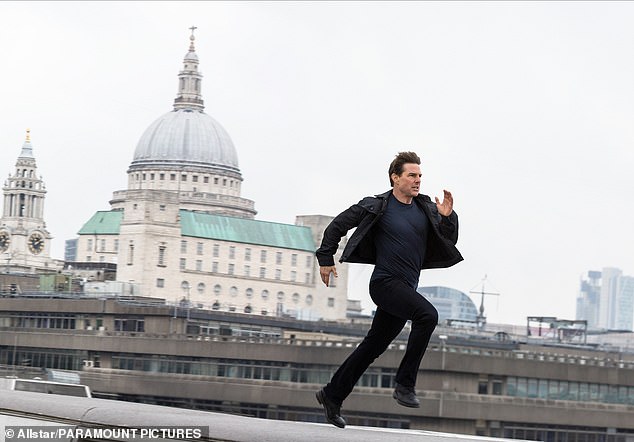 In action: Tom is known for doing his own stunts but it is not thought that he was involved in the one which went wrong on Tuesday (pictured in Mission: Impossible – Fallout in 2018)

Two of the other cast members joined him in the skydive after filming on Mission: Impossible 7 resumed following a Covid shutdown.

Writer-director Christopher McQuarrie has promised at least three ‘obscene’ stunts as the franchise continues, admitting that even he’s ‘terrified’ of his own plans.

Tom has been practising his stunts during lockdown, and has been seen racing around dirt tracks on a motocross bike and piloting a helicopter.

The actor broke his ankle while filming a stunt for the last Mission: Impossible movie in London three years ago, but that hasn’t dampened his enthusiasm for daredevil action.

He later recalled how he sustained the injury when his foot hit a wall during a heart-stopping rooftop chase involving co-star Henry Cavill. 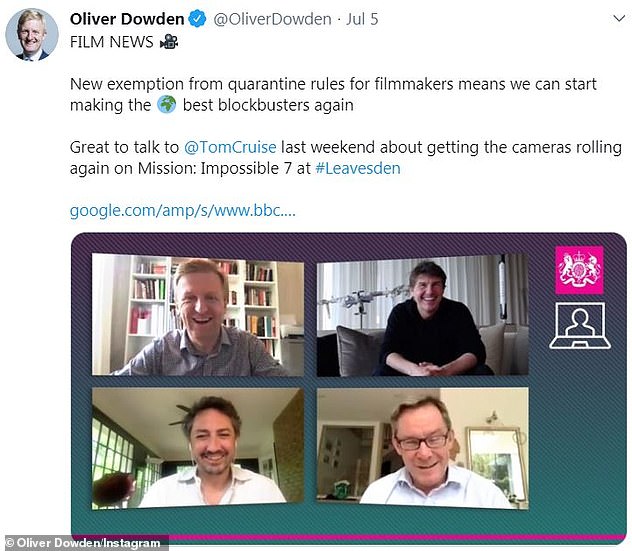 Adjustments: After delays from coronavirus, Tom discussed filming logistics with British Culture Secretary Oliver Dowden, who confirmed filmmakers will be exempt from certain quarantine rules on a video chat. It is also believed that the actor will be exempt in Norway

‘I knew instantly my ankle was broken,’ he said. ‘But I really didn’t want to do it again so just got up and carried on with the take.

‘[After the shot] I said “It’s broken, that’s a wrap, take me to hospital”, and everyone got on the phone and made their vacation arrangement.’

Tom– who is planning to shoot a future movie on board the International Space Station – personally lobbied Culture Secretary Oliver Dowden for permission to allow shooting to restart on Mission: Impossible 7, despite the coronavirus crisis, but with a reduced crew. It is now due for release in November next year.

While last month it was revealed that director McQuarrie wanted to blow up a 111-year-old bridge in Poland as part of the shoot, much to the consternation of locals.

At the end of August filming for Mission: Impossible 7 is due to move to Norway, where it is thought that Tom will be ‘exempt from quarantine rules’.

The actor revealed how ‘excited’ he was to start shooting the latest instalment of the franchise in a phone call with Norway’s Minister of Culture Abid Raja. 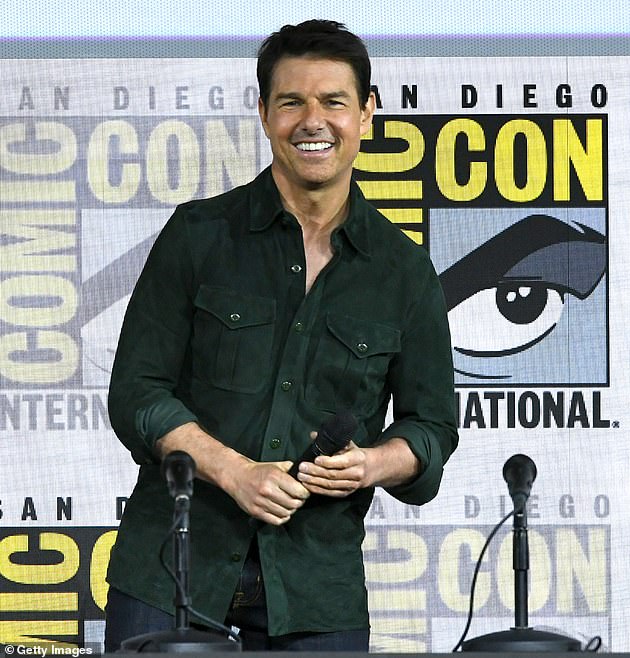 Back to work: Tom is believed to be ‘frustrated’ by more delays in filming  (seen in 2019)

Speaking about his return to filming in Norway, Tom said: ‘It’s a gorgeous country, I can’t wait to get back there. I’m very excited, as is the whole crew, about coming back.’

During the call, the minister told how Norway is ‘looking forward to having [Tom] back’ and claimed how the Hollywood star and crew are allowed to shoot in the country without having to quarantine at home first, Norwegian publication VG reported.

However cast and crew will have to pass two tests for coronavirus within 48 hours of landing in Norway and a series of daily rigorous health checks will be on place.

The set are expected to declare they are healthy, temperature checks will be completed and a mobile coronavirus test lab will be installed with medics on site, according to VG.

The plan is for Tom to arrive in Norway at the end of August with the crew set to start arriving in the latter part of the month, according to the minister.

Norway has provided the backdrop for the famous scene in Mission: Impossible – Fallout where Ethan Hunt hangs off the edge of Pulpit Rock known as Preikestolen.

The epic scene shows Ethan scaling the cliff face which boasts a 604-metre drop into the Lysefjorden. 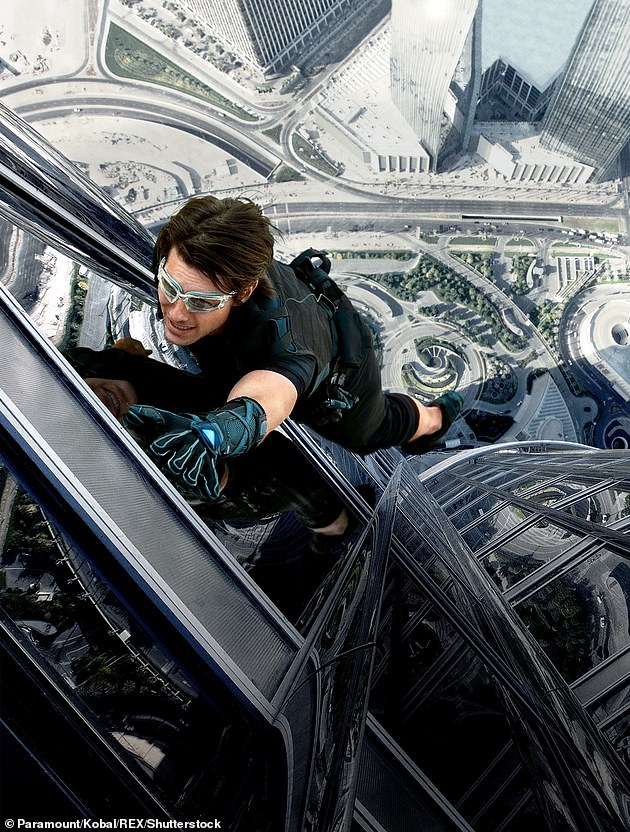 Upcoming: The films focus on agent Ethan Hunt, played by Tom, and will be directed by Christopher McQuarrie (pictured in Mission: Impossible – Ghost Protocol 2011)