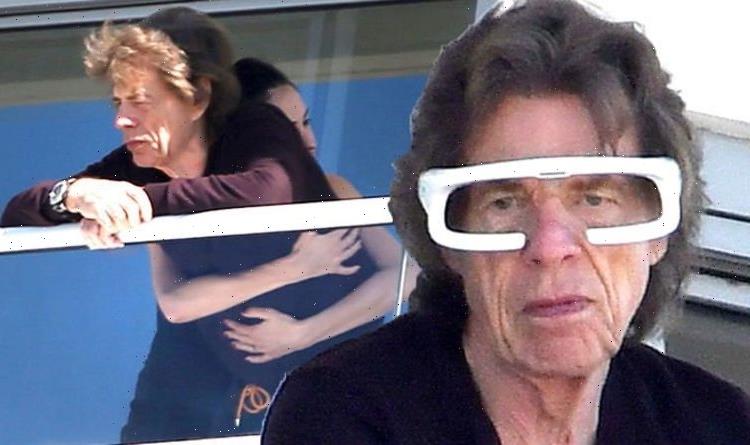 Rolling Stones legend Mick Jagger, 78, was seen cuddling his partner Melanie Hamrick, 34, on the balcony of their hotel. The star’s unusual eyewear he could be seen wearing was not a fashion statement, but rather a pair of glasses designed to combat signs of ageing.

After removing his high-tech eyewear, Mick was joined by a woman 44 years his junior, who he has been dating for some time.

Melanie appeared to come behind the star and give him a hug on the balcony of their Miami hotel.

The stunning ballerina and musician share one son together, Deveraux, who is five years old.

Aside from his glasses, Mick wore a dark red V-neck jumper and trousers, while Melanie wore her hair in a stylish up-do.

Light therapy glasses cast a blue light over the eyes and onto the face in order to treat a number of maladies.

They can be used for a variety of reasons including helping to relieve jet lag symptoms such as insomnia, sleepiness, and physical fatigue.

Light therapy is also a way to treat seasonal affective disorder (SAD) and certain other conditions, such as depression, anxiety and chronic pain, by exposure to artificial light.

Aside from the specs, which cost an estimated £130 to £300, the rocker could also be spotted using an electric shaver by passers by.

Later in the day, Mick could be seen kicking off his shoes and taking a stroll on the beach.

The star donned a straw hat and shades as he made the most of his downtime before he took to the stage once more.

That night, on 23 November, The Rolling Stones played the final show of their 58-date No Filter worldwide tour at the Seminole Hard Rock Hotel and Casino.

Mick has been married and divorced once, but has had a string of other high-profile relationships before he began dating Melanie in 2014.

He met American singer Marsha Hunt while she was married, and in spite of this, began a relationship with her in 1969.

The relationship ended in June 1970, when Hunt was pregnant with Jagger’s first child, Karis Hunt Jagger, who was born that same year.

The star then met Nicaraguan-born Bianca Pérez-Mora Macias in 1970 and married her the following year.

They separated in 1977 and she filed for divorce on the grounds of adultery in 1978.

In 1997 Mick also started dating American model Jerry Hall, whom he had four children with.

His relationship with Hall ended after she discovered he had had an affair with Brazilian model Luciana Gimenez, who gave birth to the rocker’s seventh child, Lucas Maurice Morad Jagger, in 1999.