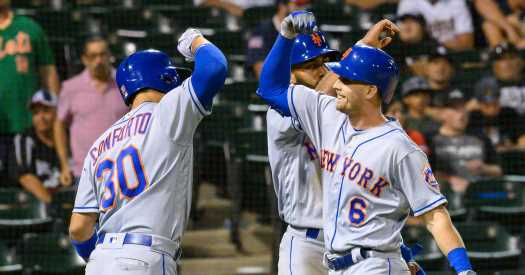 CHICAGO — Noah Syndergaard put aside trade talk to turn an eighth-inning lead over to his relievers, and the Mets rebounded from another bullpen meltdown when Jeff McNeil and Michael Conforto hit consecutive home runs in the 11th to beat the Chicago White Sox, 5-2, on Tuesday night.

In their first game since trading for the All-Star pitcher Marcus Stroman, the Mets extended a winning streak to five games for the first time since April 2018. After falling to 40-51, the Mets have won 11 of their last 15 games to move within the outer edge of the N.L. wild-card race.

The Mets dealt pitcher Jason Vargas to Philadelphia on Monday and there has been speculation Syndergaard or Zack Wheeler could be jettisoned before Wednesday’s trade deadline. Syndergaard posted a GIF to Twitter on Sunday of his image with the words “I HAVE NO IDEA WHAT’S GOING ON” superimposed.

Given a 2-0 lead, he allowed an unearned run in the sixth when third baseman Todd Frazier bobbled José Abreu’s two-out grounder, allowing Yolmer Sánchez to score. Syndergaard, a 26-year-old right-hander who is not eligible for free agency until after the 2020 season, struck out a season-high 11 in 71⅓ innings.

Seth Lugo relieved with the bases loaded and got Abreu to ground in to an inning-ending double play.

Edwin Díaz then blew a save for the fifth time in 28 chances when he walked Ryan Goins leading off the ninth, threw a wild pitch as Eloy Jiménez struck out, hit James McCann with a pitch, threw another wild pitch, then allowed a sacrifice fly to Tim Anderson.

Amed Rosario singled off José Ruiz (1-2) leading off the 11th for his fourth hit, and McNeil greeted Josh Osich with his 11th home run — his first this year off a left-hander, The drive barely cleared the fence in right-center.