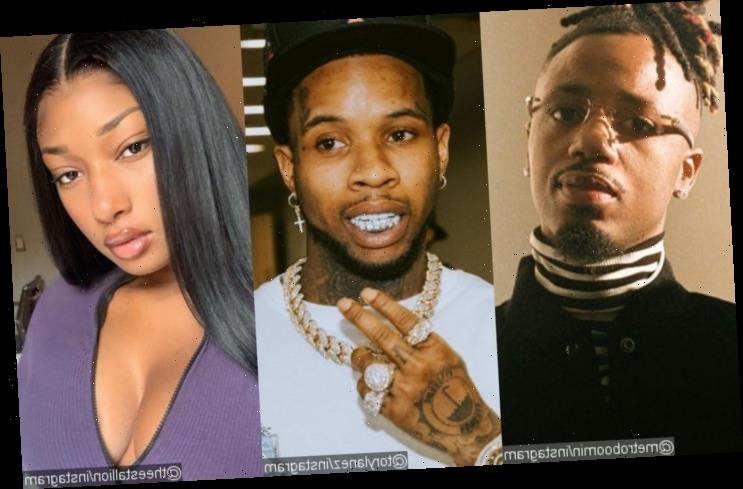 Upon seeing the post, some fans, however, slam the record producer for staying mum when femcee Nicki Minaj accused her ex-boyfriend Meek Mill of beating her.

AceShowbiz –Metro Boomin joins the list of celebrities who condemn Tory Lanez for allegedly shooting Megan Thee Stallion during an altercation in July. Taking to his Instagram account, Metro dragged the Canadian rapper for assaulting a woman.

“Any man who put his hands on and/or physically hurt a woman is a h*e,” the record producer wrote on Tuesday, August 25. Metro also said that “The Take” spitter “deserve to get beat.”

Upon seeing the post, some fans, however, slammed Metro for staying mum when Nicki Minaj accused Meek Mill of beating her. “Where was the energy when nicki said meek beat her up though LOL,” a fan questioned. One other added, “Idc they still work with meek, Rick Ross, [P. Diddy], pnb rock,sheck wes, French Montana and more so all of this is just posturing.”

Prior to this, Maxo Kream also weighed in on the drama involving Tory and the Hot Girl Summer. “I wasn’t going to speak on this s**t until I seen n***as and b****es coming for Megan, talkin’ like she 6ix9ine or something,” the Houston rapper said in a video that he uploaded on Monday. “Three days before Megan got shot I was in L.A., I was at the hotel. Tory Lanez’s b***h-a** was staying at the hotel too.”

He also said that his people held up their guns at Tory after the latter mistook his car for his own car while they were at a local Jamaican restaurant. “You would shoot a female but when some gangsters get on your a**, up sticks, n***as cop plea bargains,” Maxo added. “Tory Lanez a b***h, bro. Any n***a from Texas that ain’t standing up for Megan y’all some b***h-a** n***as too. Keep Megan name out your mouth, n***a.”

The “Savage” raptress opened up about the shooting incident on Instagram Live last week. “Yes, this n***a Tory shot me,” she confirmed. “You shot me. And you got your publicist and your people going to these blogs lying and s**t. Stop lying. Why lie? I don’t understand. I tried to keep the situation off the internet, but you dragging it. You really f**in’ dragging it. Muthaf**kas talkin’ ’bout I hit this n***a.”