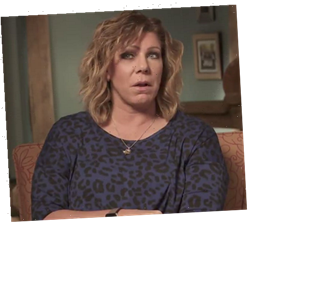 Meri Brown did something rather unusual last week:

She directly addressed her marriage to Kody Brown.

To be more accurate, we suppose, Meri really addressed a stranger online who directly addressed the Sister Wives star’s marriage to Kody Brown.

The veteran TLC personality spends a great deal of time on social media talking around this relationship, hinting at a great deal of drama and/or the end of her long-time romance with Kody.

She just never really gets specific.

This past Wednesday, however, Meri was hosting a Facebook Live session.

She was selling her barely-worn LuLaRoe clothing items during the online exchange with her followers… when one them made a reference to a certain Sister Wives episode this season.

“I’m super curious if anyone knows this episode. It’s a couple of years old. I’m just saying,” Meri said while holding up a $35 item.

“That one was the one I wore when I did some dance for Mykelti’s bridal shower. I had to dress ‘70s,” she added.

Whether a potential customer then asked a legitimate question or intended to embarrass Meri, this individual proceeded to post the following:

“Was that the episode where Kody said he doesn’t know why he married you?”

If you’ll recall, on an installment of this reality show from just a few months ago, Kody said he regrets Meri, telling a therapist that she plays the victim too much and is generally a downer of a wife.

When Meri saw the remark, she told her assistant to “block” the troll.

Meri is clearly growing a tad bit irritated with all the attention on her failed marriage.

Late last month, she turned off the comments on some of her Instagram comments because too many people kept asking too many questions about Kody.

The thing is, Meri is the one who keeps bringing Kody up — even if she never mentions him by name.

Instead, she quotes memes and poets and says things like she’s ready to be loved by someone else.

“I am free to become … to fail … to learn. I have the advantage of hope. I have the opportunity to be love … to be loved,” wrote Meri a few days ago.

On an April Sister Wives episode, meanwhile, Meri acknowledged all the problems in her relationship.

“People ask me all the time why I don’t just leave,” she said at the time.

While she and Kody admit they have issues, they said back then that their relationship is “fixable” — and Meri also noted she wasn’t interested in abandoning all of her loved ones.

Still, though, everyone hits a breaking point, right?

And it sounds very much these days as Meri has smashed right into hers.

Can anyone blame her?

Kody Brown and Meri Brown: All the Signs It’s Over (For Real)Start Gallery