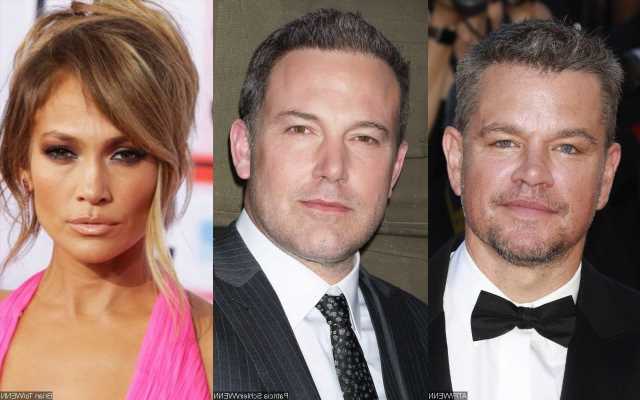 The ‘Stillwater’ leading man, who has been supportive of his ‘The Last Duel’ co-star’s romantic relationship, previously admitted that he’s ‘glad’ seeing his pal getting back together with the singer.

AceShowbiz –Matt Damon turned out to be the guy who third-wheeled Ben Affleck and Jennifer Lopez during their recent date. The “Stillwater” actor, who has supported his pal and the “Let’s Get Loud” singer to get back together, was photographed joining the couple while they were taking a stroll at Malibu beach near Paradise Cove.

In pictures published by TMZ, the 50-year-old was seen smiling ear-to-ear while walking next to the “Gone Girl” actor as the latter held the pop star’s hand. For the outing, the “Jason Bourne” star looked comfortable in a white T-shirt, shorts, a black hat and dark sunglasses.

Ben, meanwhile, donned a gray T-shirt, dark jeans and black sneakers. As for J.Lo, she looked stunning in a white slit dress that she accessorized with a beige belt.

Matt has previously shown his support for Ben and J.Lo to rekindle their romance. When asked about reconciliation rumors between the two, he told “Today” in May, “I love them both. I hope it’s true. That would be awesome.”

After the mother of two confirmed her romance with the “Justice League” actor on July 24, “The Martian” star said that he’s “just so happy for [his pal].” When speaking to Extra, he gushed, “He’s the best. He deserves every happiness in the world. I’m glad for both of them.”

Matt and Ben have been friends for more than two decades. Their first film together was 1997’s “Good Will Hunting“, which earned them the Academy Award for Best Original Screenplay. The actor duo then reunited in “The Last Duel“, which they co-wrote together.

When appearing in a July episode of “The Tonight Show Starring Jimmy Fallon“, Matt opened up about his latest project with Ben. “It’s the first movie we’ve written in 25 years or something, and we wrote with another great writer named Nicole Holofcener,” he told host Jimmy Fallon. “It’s all based on this history book we read and so we adapted that.”