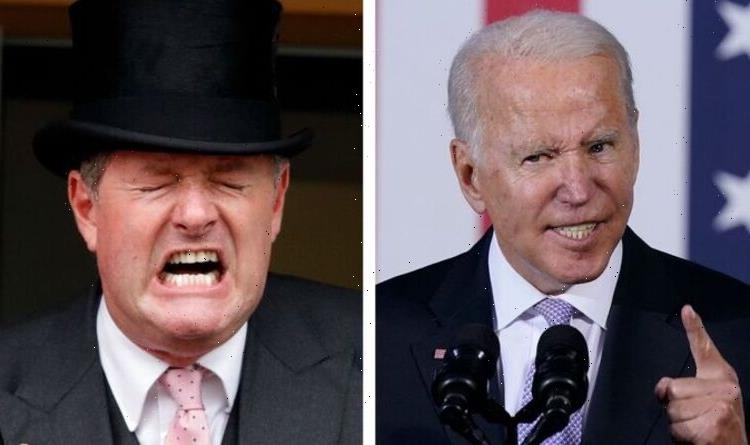 Amid the ongoing conflict, and as millions of refugees have been displaced from their homes following the Russian invasion of Ukraine, many have looked to presidents and top politicians to provide a solution. However Piers Morgan was witheringly critical of Joe Biden, who appeared yesterday to backtrack on his administration’s previous assertions that sanctions could deter Putin from continuing the war.

Sanctions never deter! You keep talking about that

“Let’s get something straight,” Joe Biden bluntly began as he fielded questions from a CBS News journalist.

“If you remember, if you’ve covered me from the beginning, I did not say that in fact that sanctions would deter him,” he continued, in reference to Vladimir Putin.

“Sanctions never deter! You keep talking about that.”

Seconds earlier, he had accused the journalist, Christina Ruffini, of “playing games” after she quizzed him on how sanctions could work if they had not been a sufficient deterrent to prevent the invasion.

Piers had an axe to grind after viewing an incendiary video clip of the press conference, posted by @RNCResearch, and took to Twitter to tell all to his network of almost eight million followers.

“Either Biden didn’t know his entire top team repeatedly said sanctions WOULD deter, or he’s forgotten they said it,” he wrote.

“Either way, this makes him look ridiculous, and the fact he mocked the journalist is even worse.”

However another Twitter user suggested that he should check out a longer version of the video to put his concerns into context, warning: “You need to listen to him fully – this cuts it off.

“Did you watch the whole clip or just took RNC’s words at its face value?” @neelakaj challenged.

“He said imposing sanctions won’t deter him but maintaining sanctions for year or two will stop Putin. Do better.”

However @MillingtonJulia was critical of Biden, just as Piers has been, writing: “Unbelievable and scary how much power this old man has.”

@warrenb1173 added: “Harmless enough – I don’t think he even knows what day it is, let alone what power he has.”

@wvueod concurred: “This is not the first time he has stated he never said something when he actually did. I think he forgets that in this digital age nothing is forgotten.”

National security adviser Jake Sullivan had appeared to clarify Biden’s stance on sanctions back in February when he confirmed: “The President believes that sanctions are intended to deter.

“And in order for them to work — to deter – they have to be set up in a way where if Putin moves, then the costs are imposed.”

During the conference, Biden reiterated the need for consistency in dealing with Putin.

“The single most important thing is for us to stay unified and [for] the world [to] continue to focus on what a brute this guy is and all the innocent people’s lives [that ] are being lost and ruined,” he continued.

“But look, if you’re Putin and think that Europe is going to crack in a month or six weeks or two months, why not? They can take anything for another month.

“We have to demonstrate… we have to stay fully, totally, thoroughly united.”

The press conference had taken place at the NATO Headquarters subsequent to Biden’s meeting with world leaders to discuss the crisis.

Biden now seems to believe it is short-term sanctions that cannot deter, instead opting for a long-term strategy against Putin.